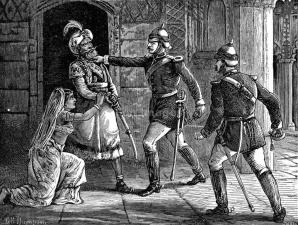 To this very day, May 11, 1857, Mughal Emperor Bahadur Shah Zafar received a few hundreds of East Indian Company cavalrymen in Red Fort, Delhi who sought his blessing to throw out the yoke of British rule in India.

As a letter from one of the rebels’ leaders put it: “The English are people who overthrow all religions…As the English are the common enemy of both (Hindus and Muslims), we should unite in their slaughter…By this alone, will the lives and faiths of both be saved.”

This heralded the start of the greatest revolt against colonial powers, English or otherwise, of the 19th century. Practically everyone in the Bengal army turned against their British officers. Civilian unrest soon kicked in in support of the rebelling sepoys across the country.

The discontent had been building to a climax. The British, who arrived as traders in the 17th century, showed their true colours by the 18th. Britain wanted to dominate the world and be the sole global power in a new British century. Lord Wellesley, governor general of India from 1798-1805, vowed to remove any European or Muslim regime which became an obstacle to this dream.

So fervent was this ambition, the so-called Forward Policy, that Britain pulled out all stops to bring the “jewel” India under complete subjugation. Local laws were abolished. A massive drive began to turn the “godless natives” into Christians.

The building discontent had more than one dimension to it. Along with interference in local customs and evangelical drives, Indians resented the use of English in schools as well as the coercive powers of judicial- social interventionist methods.

Indian industries lay in ruins. Handicrafts and agriculture only caused indebtedness. The “gang” of money lenders, such as landlords and zamindars, had joined hands with the Britishers.

So insistent were British in bringing “sovereign” Muslim native rulers under its yoke that they manipulated and spread all kind of lies. In order to annex the flourishing Avadh region, they produced a “fake dossier” before parliament. It was so full of distortions and lies that one British officer, involved in the operation, termed it as “a fiction of official penmanship.” The locals though preferred the  “slandered regime” of the Nawab…to rose-coloured government of the company,” as the official put it.

This combustible situation needed a spark and it was provided by the greased cartridge affair. The revolt spread quickly, a tribute to the secrecy with which the uprising had been planned. British asserted its force by September, British forces attacked Delhi, already under the siege. The massacre included those of ordinary citizens. In one neighbourhood, Kucha Chelan, 1400 unarmed locals were hacked to death. Delhi was pillaged torched, completely ruined by the vengeful foreigners.

Emperor Zafar was trialed and hanged. He was slapped with an absurd charge: A Muslim conspiracy to subvert the entire British Empire, stretching from Mecca and Iran to Delhi. The fact that it was an uprising largely planned by Hindu sepoys was conveniently ignored.

The outcome is well-documented: The 1858 Government of India Act ensured that the control was passed on from East India Company into the hands of the British Empire. The make-up of military forces was dramatically altered. The rule was so heavy-handed that between 1858-1947, there were only 20 minor mutinies mounted by Indian regiments.  But coercive methods also sparked an awakening of Indian nationalism and the signs of an emerging modern India was everywhere—in schools, colleges, universities.

Britain couldn’t have afforded to let India go. It was a major destination of investment for traders and bankers. The high-growth sectors were rail, tea and cloth. The British was unwilling to allow India, the “great barracks whose taxpayers supported up to half of the British regular army” to slip out of its grasp.

As in now, there is striking similarity in West’s methods. Like today, the rulers blamed it on “Muslim fanaticism.” They termed their opponents as “incarnate fiends,” Their heavy-handedness bears a striking resemblance to the present tale in Middle East and elsewhere. The intrusion has radicalized the people against them, like it was in 1857.