Guha and the Gandhi he hides 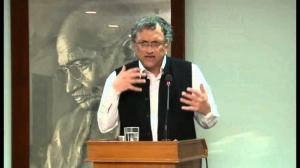 Ramachandra Guha today hogged the Indian Express edit page with his column: “Does Gandhi have a caste?”.

Guha, already a book old on Gandhi–“Gandhi before India”– will have his second one on the man next year. Apparently, the cottage industry on Gandhi is a useful tool for self advancement and setting up the political agenda in this country.

Guha’s peg is the recent reference of Amit Shah where the BJP president had called Gandhi the “Chatur Baniya.” This has Guha in an outrage even though he himself reminded readers of “residue of Bania upbringing” in Gandhi in his book.

Gandhi is larger than life to most Indians. That doesn’t mean he is above examination. A Hindu mind isn’t shy of evaluating his own Gods. There is no reason a Mahatma be exempt from such a scrutiny. Gandhi himself would’ve approved of such “experiments with truth.”

So let’s examine if Gandhi didn’t differentiate between castes. In his over two decades of stay in South Africa, Gandhi didn’t think Black Africans were worth his time. In 1893, he wrote to the Natal parliament saying that Indians were better “than savages of the Natives of Africa.” He supported more taxes on impoverished African people and turned a blind eye to the brutality of the Empire on Africans. He termed them “kaffirs” an extremely offensive racist slur.

No less than Gandhi’s grandson and his biographer, Rajmohan Gandhi, has acknowledged that Gandhi was “prejudiced about South African blacks.” Historian Patrick French wrote in 2013 that “Gandhi’s blanking of Africans is the black hole at the heart of his saintly mythology.” Today a large number of Africans view Gandhi as a racist vis-a-vis Black Africans. A revision in his stature is already underway.  Last year his statue was banished from Ghana University in Accra after massive protests by professors over his racist stance.

Guha of course would hide such facts from our view. Closer home, one would be interested to find out Guha’s opinion on Gandhi’s role in the Khilafat Movement (1919-1924). Most of us don’t know about it as a sanitized history is propagated by Left-Liberal combine in whose company Guha clearly is comfortable.

At the end of the World War I in 1919, Ottoman Turkey lay beaten by the Allied forces. Their pretensions of being Caliphs of the Islamic world was in ruins. It got the hackles up of Muslim leaders in India. They formed a committee to force the British government to restore the Sultan. This in brief is known as the Khilafat Movement.

Gandhi and the Congress launched the non-cooperation movement in support of the Khilafat demand. It clearly was a quid pro quo move. Gandhi, in return, got the Muslim support. It helped him become the biggest political actor of the Indian stage. (Bal Gangadhar Tilak had died on August 1, 1920). Gandhi justified his move thus:

“I would gladly ask for the postponement of the Swaraj activity if we could advance the interest of the Khilafat.” So Swaraj, which meant self-rule, became a subordinate action compared to restoration of Caliphate in a faraway land!!! It never occurred to Mahatma how the natives would make sense of such a sympathy for the Muslim cause which had nothing to do with India’s reality.

Mohammad Ali, a prominent leader of the Khilafat movement, went further: “If the Afghans invaded India to wage holy war, the Indian Muhammadans are not only bound to join them but also to fight the Hindus if they refuse to cooperate with them.”

This clearly was not respect-all-castes approach. And what was Gandhi’s reaction to this all? He supported Mohammad Ali for being true to his religion! So much for caste-free politics and the spirit of nationalism.  Over to Gandhi:

“I claim that with us both the Khilafat is the central fact, with the Maulana Mohammad Ali because it is his religion, with me because, in laying down my life for the Khilafat, I ensure the safety of the cow, that is my religion, from the knife of the Mussalman.”

Let’s leave cow for the moment as it is a more sensitive subject than Mahatma these days. It must be mentioned though that Gandhi diverted a substantial sum of money from the Tilak Swaraj Fund to the Khilafat movement.

Gandhi’s support for Khilafat led to Mopla Rebellion of 1921. (Moplas are a Muslim sect of Malabar in Kerala). Murder and rapine followed the failure of Khilafat. It soon became a full-scale rebellion. Civil authorities caved in and army had to be summoned. Khilafat flags were hoisted on police stations and government offices. It took seven months to put it down completely.

Guha’s subtle message is that all religions are the same.  Hindus must not make any distinctions vis-à-vis Islam, Christianity and other religions. And by inference, Ahimsa, the cornerstone of Gandhi’s philosophy, must be internalized.

But religious distinctions are there for all to see. Hindus don’t follow one book like Koran or Bible. They don’t have one God like Islam and Christianity. There is no prophet or messenger who stands between the God and humanity. There is no central religious authority like Pope to them.

Every time you open a newspaper, you read a piece by Guha, Sagarika Ghose and their ilks who appeal to the pacifist image of Hindus. Their method to neutralize the majority is simple: beat them with the creeds of Mahatma and shame them on the untouchability ills of Hindu society. Hemmed in by such imagery, India hasn’t responded to million cuts which aggressive neighbours inflict on it regularly. Bleed India to death is this creed. The Break-India plot must be thwarted with rigour and alertness for the forces have shifted gears.