Guide to nail 5 essential lies on Jammu and Kashmir 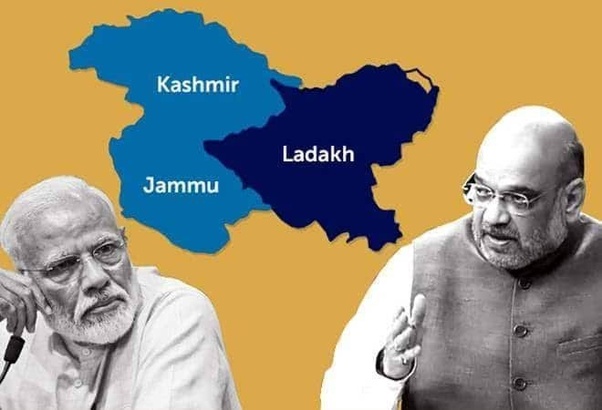 You are subjected to five essential lies on Jammu and Kashmir. Please use the below Primer if your teenage daughters, coffee friends or a stranger in transit try to shame you on celebrating the new status of Jammu and Kashmir. Who knows, inadvertently, you might be creating new foot soldiers to take on the Break-India forces and its stooge media. So here it is:

Abrogation of Article 370 is illegal

Article 370 comes under part XXI of the Constitution of India which deals with “Temporary, Transitional and Special Provisions.”

Article 370 was not incorporated when Maharaja Hari Singh signed the instrument of accession on October 26-27, 1947.  It came a full two years later in October 1949 at the instance of Sheikh Abdullah, who was a member of the Constituent Assembly that drafted the Constitution.

So give a resounding kick in the butt to those who say that Jammu and Kashmir agreed to become a part of India only after it was assured the special protection of Article 370.

A bit of history won’t hurt you either.

India’s law minister, Dr. B.R.Ambedkar was firmly opposed to Article 370. This is what Dr. Ambedkar said to Sheikh Abdullah (as quoted in Dr. BR Ambedkar, Framing of Indian Constitution, by Dr S.N Busi):

“Mr Abdullah, you want India should protect your borders, she should build roads in your area, she should supply you food grains…but you don’t want India and any citizen of India to have any rights in Kashmir…To give consent to this proposal would be treacherous…I cannot betray the interests of my country.”

A full decade on, even Pt. Jawaharlal Nehru was conceding in Parliament on November 27, 1963: “Article 370 is part of certain transitional, provisional arrangements. It’s not a permanent part of the Constitution.”

Next year, a private member’s bill sought the abrogation of Article 370 in the Parliament. It received a near-unanimous support. Prakash Vir Shastri had moved the bill in the Lok Sabha. Among supporters were stalwarts like Ram Manohar Lohia and K. Hanumanthaiya, a senior Congress leader.

Hanumanthaiya had then pointed out that fellow MPs, irrespective of party affiliations, had wanted the abrogation of Article 370 to be made into law. He had said: “To go against or to anything against this unanimous opinion in this House is to disown constitutional responsibility in a convenient manner. Article 370…stands in the way of full integration.”

Out of the 12 MPs who opposed the abrogation of Article 370, seven were from Congress, many of them stalwarts, including Inder J. Malhotra, Sham Lal Saraf, HV Kamath and Bhagwat Jha Azad.

And by the way, how come abrogating Article 370 is illegal when the Bill wa passed by two-thirds in the Rajya Sabha and four-fifths in the Lok Sabha this month?

Who benefitted from Article 370? Obviously, the common people of J& K didn’t. The Shia community, Gujjars, Bakkarwals, Gaddis, other Scheduled Tribes, Scheduled castes and people living in Ladakh and Kargil didn’t.  Nor did Kashmiri women who made the mistake of marrying a non-resident and couldn’t purchase or transfer property to their children.

Now, with its abrogation, a total of 106 Central Laws will now be extended to J & K. A load of benefit schemes would come the way of local citizens. Prevention of Corruption Act, Land Acquisition Act, National Commission for Minorities Act, Right to Education Act etc would become applicable.

Why Not Remove Special Status of North-East States Too

This again is an argument forwarded by mischief-makers relying on your ignorance. Tell them that Article 371 (a) to (j) for North Eastern and other states are SPECIAL and not TEMPORARY provisions. That is to protect the development of a particular region for particular tribes. These being special provisions are permanent in nature. They are not temporary as Article 370 was in J & K.

Basic Rights to Kashmiris Are Being Denied

Restrictions in the form of suspension of internet or even mobile services occur every year in the Valley on Independence Day, Republic Day and Eid for the last 30 years! Durations of these restrictions have been far longer in the past.

Do you know the extent of clampdown in the Valley when it suffered a long spell of violence in 2010? What were the conditions during the long spell of unrest during the Amarnath land agitation in 2008? Why was Farooq Abdullah government (before 1984) was termed as Curfew Government?

Was it not a clampdown in the Valley when Mobiles were introduced in India in 1990s but not in Jammu and Kashmir? (It came about only in 2003 under the Atal Behari Vajpayee government).

Why was there no outcry then?

Now let’s look at the ground conditions in Jammu and Kashmir at this very moment. Activist Rahul Pandita spent 10 days in the Valley after the abrogation of Article 370 and this is what he wrote in Times of India this Sunday:

“I went around in a small car with a local number. I had no curfew pass. There were barricades but security forces could be convinced to let go, as we did several times.

“District Commissioner Srinagar had issued 161 passes to local journalists (while you kept hearing on your TV sets that journalists were unable to go anywhere).

“On Eid (no less), the government took more than 60 journalists on a chopper ride over Srinagar. (Despite stringent restrictions, many reached their neighbourhood mosques).

“Security was totally removed from downtown Srinagar between 4-7 p.m. Boys came out, they painted a little graffiti, but they did not indulge in clashes (Hey, BBC and Reuters, read that).

“Spoke to cross-section, families of policemen, from Shia community and other silent ones who say they are ok with Article 370 abrogation.”

Sheikh Abdullah was in prison for more than a decade. And he wasn’t under house arrest like the present Valley leaders are. He was packed away to Kodaikanal not by Modi but by Pt. Nehru.

Shyama Prasad Mookerjee was kept under house arrest for 44 days without any chargesheet or FIR in Kashmir Valley. Have you heard of any outcry of human rights violations on Mookerjee?

And what’s the definition of these political leaders of Kashmir Valley who thrive on elections which see only a sample of 8-10 per cent voters’ turnout? It allows them to make it to the Lok Sabha, to the state assembly, to form state governments, generation after generation, to perpetuate their dynastic rule?

And if so upset by political detentions, shed a tear for those who are detained in Jammu too!

Well, when lakhs of Kashmiri Pandits were driven out of Valley on gunpoint, the demography change didn’t matter to the champions of these pseudo-seculars.

(Ironically, when Assam is trying to weed out the outsiders to save the local, indigenous culture, these pseudo-seculars are in support of the infiltrators. So guys, make up your mind: You can’t be resisting outsiders in one state and supporting outsiders in another!).

Does Kashmiri culture imply that they remain in a state of poverty and unemployment generation after generation? Isn’t the aspiration of a largely young population—70 per cent are below 40— is for real? Don’t they know that every year, in the civil services exam, you have a topper or someone in the Top 20 from the Valley? That about 30-40 Class 12 pass-outs from terror-affected districts qualify in the IIT-JEE exams. That at least 50 people qualify for the NEET exam, the all-India entrance for medical colleges?