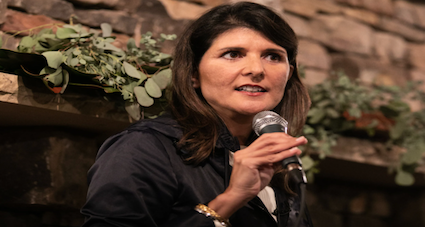 American politician and former ambassador of United States to the United Nations (UN) Nikki Haley said the United States must act “strongly” against China, stating that it will be all over if Beijing takes control of Taiwan.

Haley said the U.S. must take more decisive action against China, starting with organizing a boycott of the 2022 Winter Olympics in Beijing with allies like India, Australia, Japan, South Korea, and Canada.

“The last Olympics that they had [in 2008] was their coming out. That’s how they saw it. They were introducing themselves to the world. This next Olympics, if it goes unscathed, this is their way of showing that they are now the superpower of the world,” Haley told nearly 70 GOP lawmakers in the basement of the Capitol.

“And if we don’t boycott, if we don’t do something to call them out, mark my words: Taiwan is next. And if they take Taiwan, it’s all over because they will think that gives them free rein to grab any territory, not in the region, but anywhere they want to go.”

Several Republicans and even House of Representatives Speaker Nancy Pelosi, a Democrat, have called for boycotting the games scheduled to occur next year. However, President Joe Biden’s administration hasn’t revealed anything related to the ban.

The former US envoy further argued that G7 nations, instead of just calling out China, the world’s wealthiest nations, should have established that Taiwan is a “sovereign country.”