Harappa ‘couple’: What does Indian Express mean by ‘aunt and her nephew’? 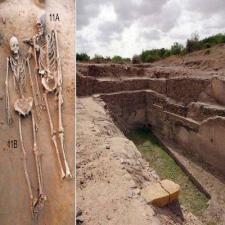 Piddi, my pet, was livid. He had got hold of Friday’s Indian Express (January 11, 2019). I try to keep the newspaper off his limits due to Piddi’s chronic high blood pressure. Something or other in the newspaper seems to get his goat up. Today it was an editorial about the skeletons of a “couple” discovered in a Harappa grave in Rakhigarhi in Haryana.

A little background to this Harappa grave is in order. In 2016, archaeologists and scientists from India and South Korea found these two “very rare” skeletons in this Indus Valley city. For two years they researched the chronology and possible reasons behind the deaths. Their findings are now out. “We believe they were a couple,” said the archaeologist Vasant Shinde who led the team, to the BBC.

Indian Express is having fits over the findings. Its’ editorial–no news report or columns, mind you—which implies the stand a newspaper has on the subject is bigotry of the worst kind. The editorial writer thinks it’s an “excessive claim” that the skeletons were of a couple and that the institution of marriage was developed in the Indus Valley civilization. The editorial says the “pre-history is a land of maybes.” The piece ends with an absolute horror: “There’s no ruling out of the possibility that they (the skeletons) were just good friends. Or an aunt and her nephew.”

It’s this “aunt and her nephew” snide which had Piddi ramming his head on the wall in despair. The dialogue between us went something like this:

Piddi: What does the newspaper mean by aunt and her nephew? Isn’t it to suggest a licentious relationship? That too towards Hindus?

Me: You can’t say it was a snide against the Hindus. It must have been said in light humour.

Piddi: In that case the light humour could’ve been factual. Relationships and marriages within family is more common in Christianity and Islam. After all, Charles Darwin had married his cousin Emma; more than one Caliph in Islam had married their cousins. This obviously is meant to snub Hindus.

Me: You are being churlish Piddi. Christianity and Islam hadn’t even existed—they were only barbarians—when a highly sophisticated Indus Valley civilization was in existence thousands of years ago.

Piddi: Oh, come on. Can’t you see the writer has termed the scientific conclusion of “they-being-couple” as nothing better than “excessive claim.” Do you mean to say that these rent-a-byte journos know better than a whole archaeologists/scientists team which spent no less than two years on the subject?

Piddi: Are you telling me that you agree with Indian Express’ assertion that “pre-history is a land of maybes”?

Me: Isn’t it so Piddi. A lot of pre-history could be a matter of conjecture.

Piddi: In that case, what should be we make of sexuality of Jesus where Saints have variously claimed to  HE being a celibate, heterosexual, homosexual and practicing polygamy. The life of Muhammad only began being chronicled 4-5 generations after his death.

Me: But the writer is mentioning pre-history Piddi. These are post-history figures of the Christian era.

Piddi: Oh, so why there still is a “maybes” around these post-history figures. Why not be definite. Why not say that King Arthur definitely existed when historians are still debating his existence. Or Robin Hood whose historicity is not conclusively proven to this date. Or that legendary Homer, the greatest of them all, probably didn’t exist?

Me: I think Piddi you are going a little overboard…

Piddi: Not me, I am just being factual. It’s these diehard Hindus and defenders of faith who allow such nonsense to keep going on. Haven’t we paid enough price for our sloth in our history? Why do we allow these Marxists, Macaulytes and Muslimytes such utter nonsense?  To call a scientific discovery as an “excessive claim” or “pre-history-is-maybes” or “aunt-nephew” skeletons? Why not abuse back as “editor-and-his-stepdaughter” jibe?

Piddi is still hysterical. His fine sense of history, as I have mentioned before, is a trouble for all of us. We have kept him in kennel. Meanwhile, we have decided to bring Indian Express at home under pyjama from tomorrow.