Has Indian Express no shame left? Is it federalism or template for secession? 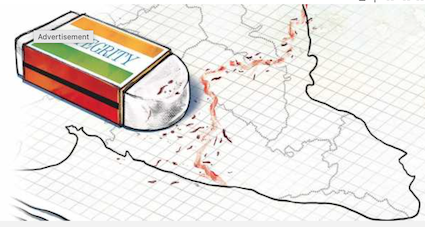 Has Indian Express no shame left? Consider this

In its second lead today, it gives the headline: For 15-min `delay’ at PM’s meet, Centre throws rulebook at Bengal Chief Secy.

Is it news or views? Was it really only 15-min `delay’ at PM’s meet? Is that what the newspaper knows all about the issue it has been publishing since Modi came visiting Mamata five days ago?

The newspaper quotes a Trinamool Congress MP that the “show cause notice served upon former chief secretary of West Bengal is void” since no direction was issued to him under Section 51 (a) or (b) of the Disaster Management Act.

(A cyclone for which the chief minister is demanding Rs 20,000 crore from the Centre isn’t a disaster?

And if a chief secretary couldn’t care less, cushioned by the State, doesn’t respond to charge-sheet, how does Centre respond to request for disaster-fund, leave alone a real-time update on situation at ground?

What happens when the Centre, rightfully, doesn’t accede to request of Rs 20,000 crore and Mamata paints the town red that a “vindictive Centre” is ignoring the tears and sorrow of Bengal citizens?

How does Centre deal with a rogue civil servant who gives a hoot the presence of no less than the prime minister of the Republic?

What do you think of an MP or its party which in its ego ignores the calamity on its citizens to protect one individual who is the point-man in bureaucracy in salvage operation?)

Indian Express then proceeds for two separate big stories in an inside page. In one, it just lauds what an exemplary bureaucrat the ex-chief secretary has been. The second piece is a rant from three ex-secretaries, ranging from home to DoPT to cabinet rank. It’s intended to present the Modi government as autocratic and acting in a manner which would demoralize the Indian bureaucracy. Let’s look at their quotes:

GK Pillai, former home secretary: “The order is irregular (posted at Centre a day before his retirement)…(besides) the joining time is six days.”

Really? Does Cyclone Yaas fall into regular times? How do you put your point across to a chief secretary who has been contemptuous of lending an ear to pleas of the State Governor and Ministry of Home Affairs for almost a month now? When Supreme Court ordered a Rs 1 fine to Prashant Bhushan was it a monetary punishment or point-made, laws-assertion moment?

BK Chaturvedi, ex-cabinet secretary: When Centre extended chief secretary’s tenure, it concurred his service was needed by the State. And then you ask him to report to Centre. And that the Constitutional process was done away with.

And that’s because Cyclone Yaas occurred, you wise-head. It wasn’t so when the extension was granted. And what’s Constitutional about the chief secretary not updating the prime minister about the disaster in State?

So the method to ensure that younger officers are not “demotivated” is for them to flout its command of chain with immunity. And dare Centre set an example so it’s not repeated by thousands and thousands of bureaucrats countrywide. And this is how you’d protect the integrity of Republic of India, its constitution and its federalism. Where a State owns up a civil servant as its own who in fact is appointed by the Centre. And if an order wasn’t issued under the Disaster Management Act, Cylone Yaas wasn’t a disaster. And if regular indifference to Centre’s request to make yourself present is done, it’s not enough of a notice.

This is the short of the long story: Prime Minister came visiting Bengal on a disaster. The chief minister and chief secretary skipped the review meeting. Centre asked the chief secretary to report more than once. Chief secretary not only didn’t report, he didn’t even bother to reply to Centre’s repeated insistence.

And it’s for defence of this man that Indian Express chooses to headline: “For 15-min delay at PM’s meet…”. It brought out quotes from its shelf of old wise-heads to buttress its agenda. If it asked for the Centre’s viewpoint, there’s no hint.

How are readers not to deduce that it’s part of an agenda to wreck the India as we know it. That a government elected by tens of millions of citizens can’t even question the bureaucrats it appoints. Is that how you define federalism? Or is it the road to break India into pieces? And by standing with such horrendous acts of a State, is Indian Expression upholding the integrity of India or Secession from India? Is that the template for Republic of India?