Has Japan won India for its master? 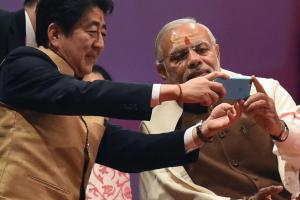 India and China have suffered a massive chasm to their ties in a matter of 72 hours which threatens the stability of Asia.

These 72 hours pertained to the visit of Japanese Prime Minister Shinzo Abe to India last week when the hosts were offered a bouquet of infrastructural, nuclear and military deals too mouth-watering to resist.

All these would’ve still been par for course but for that joint public announcement by the two Prime Ministers welcoming Japan’s participation in the India-US Malabar exercises on a permanent basis to meet the “maritime challenges in the Indo-Pacific region.”

It straightaway got China’s goat who warned both India and Japan to “not provoke confrontation and create tension in the region.”

China has long viewed Japan as a vassal of United States and its action being one of a puppet managed by its master. It sees a quadrilateral force of US-Japan-Australia-India now trying to ring and encircle it in the critical Pacific Ocean where it is engaged in disputes with Japan in East China Sea and with Vietnam, the Philippines and Malaysia among others in the South China Sea.

There is little doubt that US’ “pivot to Asia” is aimed to curtail the growing might of China, the world’s second largest economy and what better way to do than to unleash Japan, world’s third largest economy and India, world’s  ninth largest economy, at the throat of the Middle Kingdom? And one must not forget the recent Trans Pacific Partnership (TPP) which serves the same purpose.

The readers at this stage would rightfully question why I offer the supposition that (a) Japan is a vassal state of United States; (b) India has finally hitched its wagon with the US-led cart ; and (c) India and China have grown irrevocably apart despite their cooperation in Asian Infrastructure Investment Bank (AIIB), BRICS,  and SCO (albeit from next year).

There is also this critical subtext of Japan and China being irrevocable enemies which deserves an explanation but let me first throw light on the Malabar exercise issue.

Japan is not new in the US-India Malabar naval drill exercise routine which began in 1992. It took part in 2007, 2009 and 2014 but only as an invitee. Singapore and Australia too have taken part in this exercise, held in the Bay of Bengal, in the past.  But now Japan would have a permanent presence, making it a trilateral US-Japan-India naval exercise.

Clearly, it’s Japan’s presence in the exercise which has touched a raw nerve in China. Thus I move to the first synthesis to the question which you might have in your mind:

Why China and Japan are so irrevocably hostile to each other

During the Second World War, while US threw its lot in Europe to counter the Axis threat of Germany and Italy, it was China’s heroism which kept Japan pinned down in Asia before US mopped it up with the finality of the atomic strikes in Hiroshima and Nagasaki.

US and China would thus have been a natural ally and Japan a reviled enemy but for that twist to the tale—communism. As Mao wrested control from Chiang Kai-shek in China, the spectre of communism was in full bloom along with its presence in Soviet Union. The strategic location of Japan between the two Communist powers, made it absolutely priceless for United States.

For the next five decades, United States did everything it could to boost Japan as an economic power par excellence on the world stage. It tolerated Japan’s structural economic protectionist preferences and allowed it a free way market in the United States even at the cost of hurting its own domestic industry.

Cunningly, United States allowed Japan to get on with its own domestic, political and economic missions. It allowed the Japanese elites to maintain an economic system that’s radically opposite to America’s view of the world economic order. As long as Japan kept its foreign policy under United States’ thumb, the latter was willing to overlook a few nuisances.

Japan those become almost invisible to the world on the diplomatic stage. It’s political relations with rest of Asia are under-developed. It lacks multilateral associations such as EU, NATO, NAFTA, ASEAN that other regions enjoy.

A few of its unique characteristics are worth a mention to readers. For one, Japan was never colonized. Two, it remains a “one-country” language. Three, Japanese religion was never exported as Christianity and Islam were. It has far fewer Western education outlets than even China or South Korea. Foreign enterprises have restricted presence. There is very little Foreign Direct Investment (FDI) in the country.

The US predominance in Japan’s affairs was sharply brought to focus in 2010. This was the year when US nudged an “unfavourable” Japanese government out of the office. This was the cabinet of Democratic Party of Japan (DPJ) which had come to power a year before in September 2009. Till then, Japan had been a “one-party democracy” of Liberal Democratic Party (LDP) in power for 50 years.

The DPJ had a strong reformist agenda. It wanted a control over a rampant bureaucracy which encouraged a pivot towards US.  Importantly, it wanted a new China policy. There were massive “people to people” contacts planned; prime minister Yukio Hatoyama wanted to join ASEAN+3 community, consisting of Korea, China and Japan.

This got Washington furious. It refused at least three requests the Japanese prime minister made of meeting the new president Barack Obama. The new man in White House shunned Japanese head in international gatherings. The Japanese press, who followed the American editors blindly, began screaming that prime minister Hatoyama was damaging US-Japan ties. Media and bureaucracy succeeded in their vicious campaign and Hatoyama to step down.  What clinched the matter was the false impression given to Hatoyama that US would reconsider having a new marine base in Okinawa.

Hatoyama’s successor Kan Naota was wiser by the event. He distanced himself from the foreign policy reformists’ agenda. His successor Yoshihiko Noda called for an unnecessary elections which brought the LDP back to power.

So where a friendly relations with China had begun to bloom, suddenly it was now put in reverse gears. Shintaro Ishihara, towards the end of his 13-year governorship of Tokyo, proposed that the uninhabited Senkaku/Diaoyu Islands in the East China Sea be bought over. This was a long disputed territory but largely dormant due to improving Japan-China relations. Now it became a smoking hot issue. Growing relationships took a nosedive.  Beijing saw a hand of US behind these machinations.

It’s important at this stage to remember the great divide between Japan and China in the 20th century. An imperialistic Japan had seized Manchuria in 1931 and invaded rest of China from 1937.

The present Japense Prime Minister Shinzo Abe took a historic step last year by ending a ban that had kept the military from fighting abroad after World War II. It contradicted Article 9 of the country’s constitution which had renounced war forever and declared that Japan would never maintain land, air and sea forces.

Since he took office in 2012, Abe has hiked up the military budget, visited the notorious Yasukuni shrine, a symbol of Japanese militarism and denied the role of the Japanese military in forcing hundreds and thousands of women—called “comfort women”—into sexual slavery for its troops.

Abe greatly admires his grandfather Nobusuke Kishi who was Japan’s minister of munitions during World War II. Kishi raised Abe in lieu of his real father, sowing in his grandson the seeds of making Japan a military power again.

US, worried at China’s rise, was happy to stoke Abe’s militaristic disposition. It’s pleasing to Washington that Japan still supports the illegal Iraq War or that it awarded Japan’s highest medal to then US defense secretary Donald Rumsfeld recently.

So now we have a background to US’ control of Japan and the latter’s historic hostility to China. In the second and concluding part of this article, we would look at why India has hedged its bet with US-Japan lot and put itself on path of military confrontation with China.