Has SC used different yardsticks for Vinod Dua than it used for Arnab Goswami or Amish Devgan ? 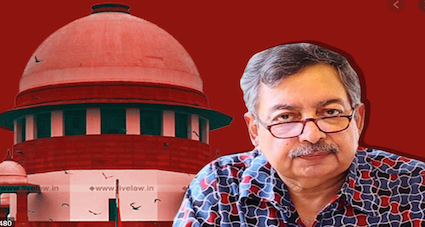 It has quashed the FIR registered by Himachal Pradesh police against journalist Vinod Dua for sedition, public mischief and other offences over the contents of a talk show on YouTube broadcast last year. It has ruled that “every journalist is entitled to protection…”

Dua had been accused of asserting that Prime Minister used deaths and terror attacks to garner votes in a Hindi Talk show uploaded on March 30, 2020.

While quashing the FIRs, the Supreme Court admitted that Dua had termed Balakot air strikes as political events to garner votes but no allegation was made against the Prime Minister…”

Let’s take the readers back to the cases against Arnab Goswami and Amish Devgan.

ARNAB GOSWAMI had moved the Supreme Court for quashing of FIR in relation to two of his broadcasts. He was accused of making “defamatory remarks” (against Congress president Sonia Gandh) in the Palghar lynching case of Sadhus. In another programme, Goswami was accused of communalizing the incident of thousands of migrant workers, gathered near a train station, wanting to be sent back home.

AMISH DEVGAN: This News 18 anchor too had knocked at the doors of Supreme Court for quashing the FIRs filed against him for his alleged derogatory remarks against Sufi saint Moinuddin Chisthi in his show.

Outcome: The Supreme Court denied Amish Devgan his plea to have  multiple FIRs against him quashed. The Supreme Court observed: “It would be wrong and inappropriate in the present context to prejudice and pronounce on aspects which are factual and disputed…”

The case of Abhijit Iyer-Mitra

The twitteratis also brought up the case of another journalist Abhijit Iyer-Mitra who wasn’t granted bail for making derogatory remarks on the Sun Temple in Konark, Odisha. In doing so, the Supreme Court observed that Abhijit’s remarks had “incited religious sentiments.”

This incident was compared with the Ram Janmabhoomi case on which the Supreme Court had observed, three years ago, that it was not a “priority.”

A top RSS leader, Bhaiyyaji Joshi, had then made a sharp comment that it was an “insult to Hindu sentiments.”

A well-known journalist, Aarti Tikoo Singh had then wondered now who is going to file the FIR against the Chief Justice of India (for inciting religious sentiments?).

The above tweet also made mention of Supreme Court doing nothing to redress the injustice, homelessness and atrocities committed on Kashmiri Pandits all these years.

Shouldn’t it be a priority? As the unending congregation of protesting farmers ought to be when the Second Wave of Covid-19 has wrought havoc and the Supreme Court/High Courts are looking at it with magnifying glass—only the farmers’ defiance of lockdown norms seems to escape them.

One closes this piece with a tweet which has caught eye

“What is the urgency on Dua…when corruption cases of Rahul Gandhi and Sonia Gandhi, who are on bail, still hanging in court for the past five years with no verdict.”

Lest an attempt is made to differentiate between the cases of Dua vis-a-vis Arnab Goswami and Amish Devgan, stating that Dua’s is a sedition case while Arnab and Amish were not charged with Sedition, it is pertinent to note that Dua has also been charged with Section 505 1 (B) too which is: “With intent to cause, or which is like to cause, fear or alarm to the public, or the section of the public whereby any person may be induced to commit and offence against the State or against the public tranquility.” Thereby, there is no much difference between the charges levied against all the three journalists).