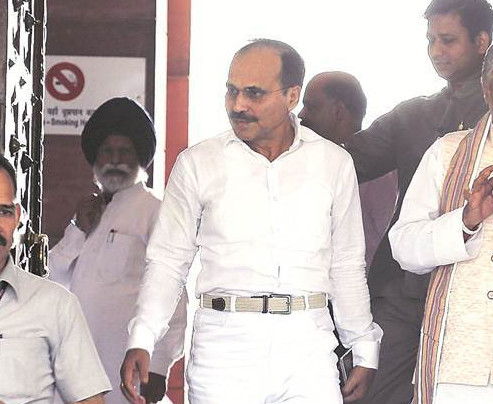 Adhir Ranjan Chowdhury looks funny in the video. I mean buttoned sleeves of a tightly-fitted white shirt with matching trousers tucked under a jeans belt near his navel, dyed remnants of what were once hair, he looks every inch a babu (clerk) we meet in dusty government offices. Very few prefer such an appearance at 63, certainly very few politicians. He could learn from the likes of Digvijay Singh, Abhishek Sanghvi, Kamal Nath or MJ Akbar who reserve their flamboyance within private walls.

But Chowdhury is no one’s Keshto Mukherjee, the drunk-comic in yesteryears’ Bollywood. He has been of invaluable use to Congress since 1991 when he cut his teeth in politics under Rajiv Gandhi’s regime. In just one generation of Gandhi dynasty, he has risen to be the leader of Congress in the Lok Sabha. There must be something about the man who could question “Why Rahul Gandhi and Sonia Gandhi are sitting in the parliament and are not behind jail” or abuse Prime Minister Narendra Modi and still earn no rebuke from his Congress high command. All within a few hours of being asked to be the leader of his party in the Lok Sabha.

Chowdhury is in the news for he has blamed his Hindi for the abuse hurled at Modi. So did Sam Pitroda, Mani Shankar Aiyer or for that matter Congress president Rahul Gandhi himself who kept fiddling with his mobile while President Ram Nath Kovind addressed the Parliament recently. Gandhi’s ingenuous darbari (courtier), Anand Sharma guessed Rahul baba was looking at the English translation of Kovind’s difficult Hindi words. So be it.

I now bring Shashi Tharoor into my theme which is different from offering my shoulder to a tearful man who has been overlooked as Congress leader in Lok Sabha. If I needed to lend a helping shoulder, I would’ve gone for Manish Tewari. Both Tharoor and Tewari must be sheepish around their 10-12 or whosoever is left among lackeys. But then when has talent been rewarded in Congress? They could’ve learnt from the fate of a Sachin Pilot or Jyotiraditya Scindia who are answering to old fogeys such as Ashok Gehlot or Kamal Nath with a straight face. The drubbings in Rajasthan and MP have mattered little; they are still in the groove.

I bring Shashi Tharoor on the matter of Hindi which happens to be the one issue holding this piece together. The man under a cloud on his wife’s death once confronted Sushma Swaraj in Parliament when Hindi was being pushed to be an official language in the United Nations. There are six official languages in UN—Arabic, Chinese, English, French, Russian and Spanish. Hindi, despite being the fourth most spoken in the world, is ignored. Nations such as Fiji, Mauritius, Suriname, Trinidad & Tobago and Guyana who could support Hindi, are fighting shy of expenses involved (The procedure, translations of files, letters, drafts etc would cost a few hundred crores). Tharoor objected to Hindi being pushed as a national language in the UN when it’s only an official language in India. (Talk of tomfoolery!).

Tharoor would’ve none of it even as Swaraj pointed out at least two prime ministers, Atal Behari Vajpayee and Narendra Modi, for having addressed the UN in Hindi. That, when visiting dignitaries speak in their local language (other than English), Indian representatives too prefer speaking in Hindi. Tharoor was to argue: “Why should we put our future foreign ministers and Prime Ministers who may be from Tamil Nadu put in a (awkward) position?”

It’s only incidental that all the names who have had faux pas on Hindi are from Congress party. No, no, I am not trying to drive home the point that they have something against Hindi, Hindu and Hinduism. I am not a (Randeep) Soorjewala who would take a shot even if it is below the belt. Mine is a larger point: Why speak Hindi and later apologize if you are not good at it? Or even a Hindi translator around you would be a discredit to your “secular” pretensions?

The fact is you can’t avoid Hindi and hope to rule India. One/third of the country is Hindi-speaking. Over 45 crores in a population of 1.30 billion. Most Indians, even if they are from north east, south, east or west understand Hindi. Would the same be said about Tamil, what say Mr Tharoor?

So speaking Hindi is a compulsion for politicians, even the reluctant ones of Congress. It’s another matter they speak in haste and repent at leisure. Till they get better at Hindi, expect such gaffes and the entertainment that follows.