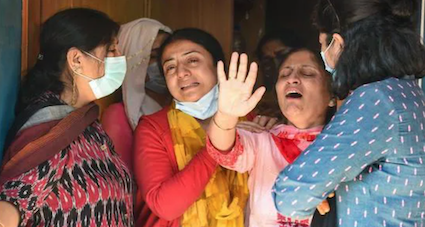 It’s religious binary only. No false wrapping would work.

Islamsits in Jammu and Kashmir singled out Hindu and Sikh teachers in a Srinagar school and shot them dead. Muslim teachers were left untouched.

Hundreds of Hindus have fled Bengal in post-poll violence. It’s because they were not Muslims and ostensibly not dear to the powers in the State.

Palghar Sadhus, BJP workers killed in Lakhimpur Kheri, Bikru and Unchahar in Uttar Pradesh which is not even in your consciousness, happen and are forgotten. As are Kashmiri Pandits. But a Pehlu Khan or Ashfaq are not allowed to fade in our memory.

You compare Bakrid with Deepawali or Onam or Kanwariyas or Holi, and would find there is never a word on cruelty against animals or the damage it does to environment. But colours and crackers are life threatening. Onam and Kanwariyas are pandemic-spreader, never so a Shaheen Bagh or protesting farmers.

Hindus cause Brahminical patriarchy but Muslim women in veil, discriminated in marriage and material rights, is passe. Upper-caste Hindus against Dalits is never missed but Ashrafs against Ajlafs is never noticed.

So, the first question is who sets this narrative against Hindus?

The logical answer is those who are not Hindus. It means Muslims and Christians. Hindus are polytheists, Christians and Muslims monotheists who believe in only one religion.

A casual look at the history of Christians and Muslims is enough to know why they spread from such localized, humble beginnings. It spread because it brook no opposition. Territories were conquered, inhabitants converted. Hindus never sought land or riches. So it never enforced its will on non-Hindus. Anyone could do whatever he wants.

Monotheist religions thus worked on power. Even now, the two are allied. Madrasas and NGOs are funded from abroad, both work towards conversion, both aim to keep Hindus down by controlling the major levers of a society: Politicians, Judiciary, Press and Academia.

Now compare the two events: Where are politicians headed? All to Kheri and none to Srinagar. What is Press doing? Srinagar is not even on home pages of TimesNow and NDTV this morning. Instead you have Indian Express at its slimiest worst: “Terror targets minorities…” (minorities, so you and I would think its Muslims as these two words are interchangeable in public discourse).  Propaganda outlets are saying “Did abrogation of Article 370 help?”. Which editorials are you reading: Kheri or Srinagar? Which matter is being taken Suo Moto cognizance of? Kheri or Srinagar?

Is Hindus Faith In BJP Wrong?

In the times of Social Media, we all have begun to understand how fake the chants of “Saving Democracy” and “Upholding Constitution” are. We all have begun to see through the deception of “secularism.” That’s why majority in this country pinned their hope on BJP in successive elections.

How do you rupture this deepening alliance? How to keep Hindus away from Power which has been the basis of Islam and Christianity’s growth? The obvious path is to make Hindus lose trust in BJP.

That’s why you have Islamists and Khalistanis, propped by this monotheist bloc, targeting India’s Kashmir and Punjab; Bengal and Kerala. One has seized the gates of Delhi in the form of protesting farmers. The other has begun to kill Hindu civilians in the Valley. Islamist forces in Bengal or Kerala are visible to anyone but a blind. A rightful CAA (for persecuted Hindus) or NRC (against infiltrators) is coloured as a move against the Muslims. Opposition’s States vote it down in assemblies; disgraceful media, stuffed with perks and funds, drum it up.

Why BJP Is Unable To See Through This Game?

BJP knows it better than us. It knows it’s not being allowed to work so that it appears inept. It knows when violence against Hindus break out, and it follows due constitutional process, it’s seen as bumbling. Harried Hindus when they find no succour in BJP would dump them, sooner or later.

Most of such Hindus feel that BJP has let them down on CAA, protesting farmers and post-poll violence in Bengal. These three are the main angst against Modi’s BJP.

Why BJP has behaved the way it has on these three issues?

CAA could’ve been multiple reasons. One, BJP wants a superpower in India and by stoking Muslim’s anger you are rupturing the country from within. Western power were building a climate of hostility against India on world stage with resolutions passed in Congress or Westminister, their newspapers in alliance with India’s shameful media, whipping up mass hysteria. BJP chose to reserve its iron hand under a velvety glove.

Protesting farmers falls under the same dilemma. Farmers as a community are a solid vote bloc, more so in proximity to UP elections. BJP probably feared the same outrage in West or at home if it chose to lift its baton. It has again gone to cover its iron hand under a velvety glove. It’s not rescinding the farm laws but is willing to engage in a war of attrition with a protest which is anything but about farm laws.

Bengal is a dagger plunged into their guts. The Bengal government is treating both judiciary and the Centre with contempt. You could have your resolutions, NHRC and CBI but the prickly Trinamool government wouldn’t let even a central officer return to its cadre.

Mamata Banerjee is a lawfully elected chief minister. In order to unseat her, on the basis of post-poll violence, all due stages of inquiry and commissions need be followed. Then too, the ruling of judiciary is important but it’s dragging its feet. BJP can’t be acting in haste and then repent at leisure. What if it dismisses the Bengal government and the order is overruled by the judiciary?

So in this rigged setting, Hindus and BJP need to stick together and be brazen about it. We have the news that Uttarakhand Congress is sending 1000 vehicles with its workers to Kheri. Half a dozen Opposition CMs are in Kheri.  Does BJP do anything comparable in Rajasthan or Maharashtra?

Both BJP and Hindus are reluctant to hit the streets and till they do so, this game is perpetually lost, at least in perception. All they are doing is giving teeth to India-breaking forces.

I end this piece with that basic premise of this piece: Hindus in Power is threat to global forces. They know religion, when mixed with power, is an unbeatable force. Their own religion is a testimony to it. Thus they are hell-bent in rupturing this Hindus-BJP alliance.

It puts a certain onus on both Hindus and BJP. Hindus need to do more than just social media outrage. Anger in drawing rooms is worthless; shown on street it has value.

BJP too needs to bite the bullet. If nothing, it would bring its flock together. But it doesn’t want to engage in perception battle, an indifference which is so much like RSS. It doesn’t appear to be standing by people who fight their cause: Independent voices are left to their fate in turbulent waters, easily sucked and neutralized by brutal police forces let loose by Opposition states.

BJP needs to loosen its central command. It has men and women who carry a punch provided they are not gagged. These worthies must not look over their shoulders all the time. They need be empowered, not dis-empowered. Same goes for patriots who abound in social or digital media. It’s these assets who need to be monetized in the currency of perception.