Hindus first lose lives; and then the narrative 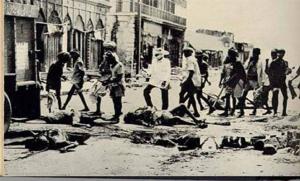 Every Independence Day fills me with sadness and anger. For the day next is August 16, albeit of 1946, when the Muslim League government of the day in undivided Bengal provoked violence against Hindus, described by the then TIME magazine as the “worst communal riots of the century.”

History remembers the day as the ‘Direct Action Day” or the “The Week of Long Knives.” On July 29, 1946, Muslim League leader Muhammad Ali Jinnah had made a call for “Direct Action”—a call to all Muslims in the country—to mark its rejection of the constituent assembly and to demonstrate to British and Congress that a separate nation called Pakistan alone could offer them security.

Were Muslims unsafe in Congress-dominated India? Mahatma Gandhi would’ve called it the “greatest irony.” All his life he was accused of Muslim appeasement, from Khilafat movement to Malabar riots and later to funding Pakistan with Rs 55 crores which was the last straw for a Hindu protagonist, Nathuram Godse.  All these killings after Direct Action Day, Noakhali, and Punjab partition still had Gandhi reaching out to Pakistan even as their infiltrators were carving out Kashmir illegally–looting, killing and raping with impunity.

Had Muslims been unsafe in India, the call for Pakistan would’ve come much before than it finally did in 1940. Had Muslims been unsafe, overwhelming majority of Indian Muslims would’ve thought little of Muslim League till 1945. If Muslim security alone was uppermost in Jinnah’s mind, he ought to have worried about millions of Muslims he was leaving behind in vivisected India.

So, that’s Exhibit A:  Jinnah’s call for Direct Action Day had little basis but for his own personal agenda. He found a ready ally in Britain who were stung by Congress’ non-cooperation during World War II and wanted to teach them a lesson. Britain also wanted to retain a foothold in the Indian sub-continent, access to critical Arabian Sea and to stem the advance of Russia and its’ Communism to Middle East where oil was beginning to be the new big lolly.

The next set of facts are undisputed too: That (a) the then Bengal Chief Ministe Huseyn Shaheed Suhrawardy, “king of goondas” made an inflammatory speech in Calcutta while calling for a bandh on the day; (b) police and other security services were given off for the day; (c) Muslim League mouthpiece The Star of India called upon Muslims to remember the jihad, the Battle of Badr, when a handful of Muslims overpowered the heathens, (d) Pirs and Mullahs were urged to mobilize Muslims on the prayers of Friday the 16th.

From this stage on, the Left-Liberal academia takes over the history that reaches us. Ramachandra Guha admits that although “the violence was started by the (Muslim) League, the main sufferers were Muslims.” The Quint quotes a writer and a BBC programme to show how Hindus were enacting violence; Scroll mentions that 75% victims were Muslims; The Wire asserts that Suhrawardy is “mis-remembered as a Hindu-hating communal leader for he wanted a united Bengal (who are we to tell them that’s because Suhrawardy didn’t want to lose Calcutta, the nub of Bengal’s economy).

(a) No official position only a widely varying figures of between 4,000-10,000 killed, mostly a guesswork; (b) In August 1946, the Government of Bengal appointed an enquiry commission presided by the Supreme Justice of India, Sir Patrick Spens. Although the commission interrogated many witnesses, its conclusions were never published!

EXHIBIT B: Why the report wasn’t published? You would never see a select academia/historians mentioning or questioning it. You would never find this Left-Liberal bloc telling you about “evil” Governor Frederick Burrows and his complicity in Direct Action Day; you would never find this Left-Liberal cabal tell you that during the days of the partition, the sentiments of British officers, be it police or army or bureaucracy, were overwhelmingly pro-Pakistan because of the non-cooperation of Congress during World War II. Or the role of such British officers in helping infiltrators in Kashmir in 1947-48.

You pay enough attention and you would get the pattern in modern day: it’s never Hindu right-wingers who are killed in Kerala but violence is from both sides; it’s never BJP leaders who are massacred and thrown into gutters in West Bengal but losses are on both sides. You would get the pattern when the proposed Citizenship Bill for Hindus who are emptied from Pakistan, Afghanistan and Bangladesh is opposed tooth and nail by these official raconteurs. Why the brilliant account of Hindus’ suffering in Bengal by Tathagata Roy “My People, Uprooted” is kept hidden from your attention. For anyone but Hindus is the creed.

Even though they all concur that Muslims initiated the riots at the call of Suhrawardy; that police was pulled in; yet somehow more Muslims died on a data which is non-existent!!! (and dare you disbelieve them).

So I will follow August 16 this year with both trepidation and sadness. Trepidation is to watch out for fresh “painted” accounts by the unscrupulous. Sadness, for if a debate, seminar or remembrance of the day is observed, it would somehow be BJP who would be plastered as communal!  Meanwhile, you and I would keep sitting on our haunches—and watch our next generation brain-washed and swamped with guilt. The continuing horrors on millions of Hindus in east of our land is neither heard nor told.

So first you lose lives; then you lose the memory of these lives and instead of outrage are left with guilt. That’s how brilliantly a narrative is controlled.

(This piece is from our archives but relevant in present days when India faces threat both from jihadi forces and unscrupulous politicians who don’t mind sleeping with the enemy as long as power could be obtained).