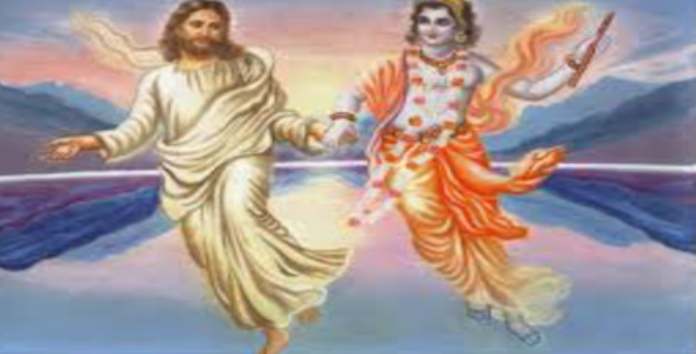 The Christian missionaries had converted thousands of Hindus by spending crores of rupees for decades in India. It continues to do so in the states of southern India, especially in Kerala and Tamil Nadu.

Several international Christian donor organisations pump money into India to succeed in their alleged aim of converting people to Christianity. They make Dalits, backward and low-income families their prime targets and then lured the underprivileged Hindus to Christianity with the help of NGOs and other social organisations.

However, while Christians continue to sell their religion, recent research shows that Christianity is nothing but a failed project that mimics the local culture for their proselytisation projects.

A twitteratti, which goes by the name Luculent ॐ Vijayalakshmi (@wataboutery), puts forward the case that show how the religion subsumes all the practices and beliefs of the natives as its own in a bid of conversion.

Whereas there is no mention of holy offerings like Panchamritam or Vibhooti or Kumkum, murthi carvings or rudraksh in Christianity, missionaries are using them to to sell Christianity disguised as Hinduism.

There are morphed images where Jesus is placed in place of Buddha, allegedly used by missionaries to target the beliefs of a particular group and attract them.

The thread points out how for Surya Namaskar, they have Yeshu Namaskars and just like Ganpati Bappa; there is Yeshu Beta.

Moreover, while nowhere in the world has been any procession of Bhumi Poojan done by Christian missionaries, the Twitter thread shows how they were doing Bhoomi puja and aarti to lure people that hold on to old practices. Beyond that, Christians have also taken Yoga and tried to highlight that it was Christianity that first acknowledged the culture of Yoga.

The twitterati has presented several images to make her point: For instance, Christian adherents are dressed up in Sabrimali attire of faithful Hindus.

In Madurai Theological Seminary, which is  an ecumenical venture of Tamil churches in Arasaradi, Madurai, caricatures of goddesses can be seen placed on the Christian cross

If you know, it is nothing but a trick to mimic Hinduism and presenting it to Hindus in India, alleging that it would give them the ‘relief’ from the “caste-based discrimination”. However, “The condition of Dalit Christians is nothing to rave about: Unorganised, uneducated, leaderless and socially ostracised.