How credible is India’s response to threat from the sky in J & K? Pretty thin at present 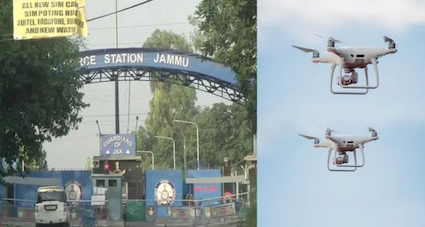 The two bombs dropped at Indian Air Force (IAF) Station, Satwari, apparently by use of drones, have created a new headache for the security agencies. After what is called the technical area of the airport in Jammu, drone sightings were also reported from Kunjwani and Rattnu Chak area. These were spotted by QRTs (Quick Reaction Teams) of the Army and vanished thereafter when they were fired upon. Should the strikes in the IAF holding area be considered a trailer, a curtain raiser of sorts for the coming events, perhaps more potent and accurate strikes in future?

Incidentally, a number of helicopters are based in the IAF station at Satwari, and it seems providential that no damage was caused to any of high value assets in the twin strikes. DGP of JKP Dilbag Singh has said that the drones were apparently operated from across the border and he said this was the handiwork of terrorist outfit Lashkar e Taiba (LeT). Other than remaining vigilant, there is hardly much security forces can do here, and that is a worrisome development.

The aerial distance towards Suchetgarh Post manned by Border Security Force (BSF) from Jammu is less than 15 km. From the IAF station where the bombs were dropped, the distance to Suchetgarh is perhaps 38 km, or lesser. The distance of military stations at Miran Sahib, Akhnoor, Samba, Kalibari (Janglote) and several others from the Pakistan border is lesser. Technically, therefore, many of the military stations could be potential targets, much like sitting ducks if the GPS coordinates of drones are more fine-tuned.

Do the security forces, including police, Army, and the IAF, have any reliable protection equipment against such drones? Interestingly, when drones became commonplace some years ago, farsighted security experts had warned of their imminent use for military purposes. Not only by militaries, but terrorists, also too.

What will the security forces do in the coming days to tackle this new menace effectively? Is deploying own drones for surveillance, to keep vigil against intruders, the answer to this newfound threat? May be. Theoretically, deploying laser guns to shoot down such drones, if found, is possible. But that also means designing, production and deployment of these laser guns specifically for this purpose.

Last year, when the Ladakh stand-off with China on Line of Actual Control (LAC) was some months old, videos of drones delivering meals to Chinese soldiers appeared online. It is such types of drones, capable of flying a few kilometres with small payloads, which may have been used in the Jammu attack. The National Investigation Agency (NIA), Intelligence Bureau (IB) and Military Intelligence (MI) must be already collating evidence to unravel the attacks.

In December 2009, Indian spectators had seen a drone perhaps for the first time on silverscreen in an Amir Khan-starrer 3 Idiots. About a decade later, in 2019, Vicky Kaushal-starrer Uri The Surgical Strikes, again featured a drone on the screen. These were dramatic portrayals about drones, and their possible uses. It seems we are headed into an era where we may see more real drama rooted in use of drones. AD (Air Defence) regiments do have an answer, or two, for some aerial intruders but drones add a new dimension to air warfare altogether.

In the movie Uri, it is Paresh Rawal who plays the role of National Security Advisor (NSA) Ajit Doval, but the real Doval may be awfully busy right now trying to find answers to the new fast emerging threat. Use of ordinary drones, for military purposes, and carrying out terror strikes. Welcome to the future!

(NewsBred opines: It’s a fact that India doesn’t have anti-drone installations at present. Shooting them down with a sniper is the only option but not a very credible one since sighting them in night is not easy. India has been slow in anticipating the danger, more so when we have the instance of two key oil facilities inside Saudi Arabia being bombed in 2019. The United States uses it frequently in Pakistan as well as in Middle East—like it used to assassinate Iranian general Qasem Soleimani in 2020. In 2018, Venezuelan president Nicolas Maduro also claimed he survived an assassination attempt involving a drone rigged with explosives).