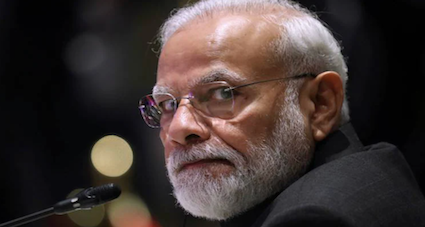 It’s unlikely Mr Modi doesn’t know India’s streets would be occupied henceforth under some pretext or other.

How does Modi beat back this wolf dressed in lamb’s garb?

THE NATURE OF ENEMY

This enemy believes in taking over the public space.

Their defence is since we are public, we don’t need permission to occupy public space.

It refuses to recognize the legitimacy of existing political institutions or legal order.

It’s call is for Direct Action but is couched as Citizenism.

The defiant insistence is acting as if one is already free.

A new slogan to create new institutions, new society, the New Democracy gets underway—even if it is inside the shell of the old;

They operate as if they don’t have any internal hierarchy. That it works as a consensus-based direct democracy.

These Public Spaces become a Republic of its own, with its own kitchens, clinics, media centres, libraries, food courts, gyms and even entertainment lounges in due course.

The society is polarized, social order deformed and Radical Left has gotten a new kiss of life.

It’s been over two centuries since John Adams, a founding father of the United States, uttered: “There never was a democracy which didn’t commit suicide.”

This model of democracy is sold as one of Athens but in essence is one of Rome.

That is, if one was a society decided and run by the citizens, the other was one run through the representatives of the citizens.

Democracy such as ours could be sunk without a trace or rendered meaningless.

When civil disobedience occurs, the Rulers go less for batons and more for concessions which ends up abandoning their own reform agenda and alienates the majority of citizens who have elected them.

The majority wonder if the Rulers were necessary in the first place.

Soon enough, the Rulers go, their party is discredited, its business as usual for the nation is taken over by corrupt and greedy, and colonialists resume their stranglehold on nations which they had once sucked dry.

THE MODE OF ENEMY

It should be apparent to Modi by now that use of force is not an option; and relying on India’s judiciary is trusting a straw to swim across an ocean.

He also has to concede that disinformation is effective—700 dead farmers for instance—and masses are lazy.

That refutations are seldom effective. The time lag has already conceded that advantage to disinformation monsters. You can’t be fighting a fire-emiting dragon with your squirt of truth.

That propagandists have the advantage of first impression. It’s rarely overcome. The audience is already primed. Falsehood and inconsistency has already gained traction;

He has to cede that repetition leads to familiarity and familiarity leads to acceptance and Corporate Media has perfected this art for decades;

When many endorse it leads to trust and reliance. Multiple sources make masses, lazy and indifferent, to trust the misinformation.

It’s a fact that Quantity indeed has a Quality of its own.

HOW DOES MODI TAME THE BEAST

So far Modi has believed that his work alone speak for him and his party. I am afraid it’s too simplistic against such a nuanced monster. It might not affect an RSS to engage in perception battle. But it would cripple BJP and this nation if this battle is not fought on the turf of enemies. And that means:

This battle won’t be won by Modi’s shastra of constitutionality and morality.

It won’t help his reform agenda; save innocent lives in Bengal or provide citizenship to Hindu refugees; or weed out the ISI and Khalistanis who are bent upon balkanizing India.

It would keep on hold the laws he has in mind for farmers; the land and labour reforms; for his enemies wear the raincoat of deception, such as, say, environment.

Sadly, it would destroy his political career and legacy and cripple BJP much to India’s grief.