How Kanwariyas could still do their yatra: A suo motu take by a citizen 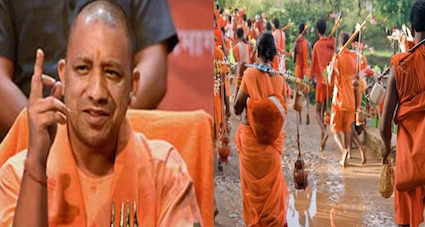 Kanwariyas could consider a simple change in appearance to do Yatra this year which was denied to them last year too on account of Covid-19.

They could affix a fake beard, wear a simple kurta-pyjama with a skull-cap or wear a dhoti with a turban overhead and they could hope the Indian judiciary would have a change of heart.

Or how else you explain that Kanwar Yatra has been taken as a suo motu (on own accord) by the Supreme Court but Kerala could go ahead with its relaxed lockdown from Sunday onwards to accommodate the faithfuls on Bakrid, never mind the God’s Own Country is on its knees by a relentless Covid-19?

This was not one isolated incident. West Bengal chief minister Mamata Banerjee was sanguine that the state didn’t need a lockdown on May 11 but announced a complete lockdown only two days later, once the faithfuls had completed the Eid-al-Fitr festivities on May 13.

The same holds true for protesting farmers who have blocked public space to the inconvenience of general citizens for nearly a year but our judiciary doesn’t fear for the lives of ordinary citizens, as it does for Kanwar Yatra, or as it was for Kumbh Mela which, guess what, was forced close on April 17, nearly a month earlier than Mamata’s decree on May 15. Suo motu? You must be joking.

The Supreme Court today uses condescending language for Yogi Adityanath’s UP for even considering a symbolic Kanwar Yatra but Mamata Banerjee and Pinarayi Vijayan are of a different pedigree. Butch Cassidy and the Sundance Kid, I say, with open holster.

This same heart-rending concern for human lives also doesn’t concern them in West Bengal where months of violence has uprooted, killed and raped thousands or else a suo motu would’ve been pressed into play yesterday instead of ambivalence which is only meant to dilute the outrage among citizenry like it dulled the exodus of Kashmiri Pandits in the Valley.

Such a cavalier judiciary could also explain why Narendra Modi would be hesitant to proclaim the President’s rule in West Bengal lest it’s overruled in the precincts of justice in the name of saving democracy.

Slam me, reserve the vilest of abuses for me, cast stones at my home but only after you could convince me that the committee which recommended its nuanced view on three Farm Acts doesn’t deserve to have its report under public gaze. Wasn’t it to be a basis to vacate Delhi’s gates or otherwise?

How do we explain that Sabrimala case still hangs fire; the bail on Rahul Gandhi and Sonia Gandhi hasn’t gone one way or the other for six years now? Or that on one hand judiciary feels Election Commission should be charged with murder while in Uttar Pradesh it forces the government’s hand to hold panchayat elections? It treats Centre like dirt on the matter of oxygen supply but how would it react if the interim oxygen report is confirmed by the final one? Who would be held accountable, sir?

Our honourables keep swooning on the right to “dissent”. How about if facts bear out the Delhi Police’ investigation that Natasha Narwal, Devangana Kalita and Asif Iqbal were prime movers in horrible Delhi Riots? And while bails could be their rights was it a moment to give a 100-page opinion on the sanctity of UAPA? How about the “dissent” of shopkeepers of Shaheen Bagh for their innocent families’ livelihood while the protest of dadis and ammis laid siege on their shutters?

One fine day the judiciary questions the law of “sedition” and whether we should carry on with such a law which is a leftover from British and used with impunity against Mahatma Gandhi. And what is CrPC? How has our present one borrowed from the 1935 Constitution? How Indian judiciary itself has been inspired in its make-up? Why, even the name of our nation “India”, isn’t it a legacy of Britishers?

Social Media today is using the vilest of language against our honourables. Somebody has unearthed that one of two judges in the Kanwar Yatra suo motu, is Justice BR Gavai, one of a distinguished lineage—his father RS Gavai was president of BR Ambedkar’s ideological party Republican Party of India and the latter ended up as the Governor of three states (Bihar, Sikkim, Kerala) besides being a MP in both houses of parliament. Our honourable’s brother, Rajendra Gavai is also a politician and president of the Republican Party of India, as per wikipedia.

Social Media is raking it up because it is the same Justice BR Gavai who had recused himself from hearing ex-Mumbai commissioner Param Bir Singh’s case recently. Why is the question which the honourable didn’t explain while excusing himself.

Are judges held accountable? Or the obeying of law is only the burden of common citizenry who wait decades and sometimes receive judgment on their cases posthumously. Who does such judiciary serve? Common people? When innocents can’t avail justice in high precincts, society simmers and erupts in due course which in political parlance is called Civil War.

When everyone could be held accountable but judiciary, it’s a recipe for misuse. Indian judiciary can’t self-regulate itself. All our four pillars—Legislative, Executive, Judiciary, Media—are for the people. Checks and balances are requisite of a civilised society which we think democracy is. Such apparent selectivism does Indian judiciary no good. It loses its authority and makes the mistake of assuming that people are dumb and no better than herds.

Alexander the Great, it is said, used to close one ear while sitting on a judgement so that he doesn’t get coloured by the position of the other viewpoint. Judges are our modern Kings and while it’s unfair to consider them Bhagwan Ram who would leave his own wife on a common man’s opinion, it’s time our judiciary is neutral or at least appear one so.

For justice should not only be done, it should also be seen to be done.