How long we the citizens be fooled by Committees or CBI inquiry? 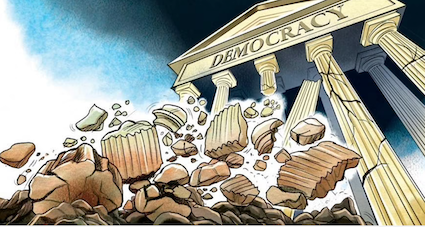 How long you the citizens of India would be fooled by the constitution of a committee, SIT or a CBI inquiry?

We have all cheered CBI being asked to probe the post-poll violence in Bengal. First the violence happened; then the visit of state Governor to distressed homes made headlines; we then had National Human Rights Commission (NHRC) stating if Bengal is allowed to go unpunished, it would be a template for others and India would be over. Now we have CBI who would ostensibly be supported by the Mamata government in its investigations. The same state government the fear of which had led CBI in the first place to plead for the Narada Scam trial to be held outside Bengal.

So what are the chances of CBI being cooperated with by the Mamata government in its probe? Fat chance. For the Trinamool Congress government would remember Maharashtra where the CBI is aghast at obstruction at every step in its probe against former state home minister Anil Deshmukh by the Thackeray government. It just has refused to hand over the documents to CBI for last few months.

If CBI indicts Mamata government would the Supreme Court order it to be removed? Or if the Modi government removes Mamata, would Supreme Court not overrule it? When nothing would happen anarchy would keep mocking the pretence of democracy at the cost of few thousand worthless lives.

It was only yesterday when the chairman of Rajya Sabha, M Venkaiah Naidu broke into tears over the “sacrilege” committed by a few Elders in the House. Naidu said he spent a “sleepless night” and some stronger action than a mere suspension of unruly MPs is being contemplated upon. All this when Article 20 of the Constitution prohibits any greater punishment to them. Why do you think Monsoon Session won’t be repeated in forthcoming sessions as the countless preceding sessions have been from previous decades?

Look at Pegasus spyware charade. It was the bone which Opposition clamped between its teeth and didn’t let the Parliament function. The alleged phone-tapping outrage is now with Supreme Court which terms spying a serious matter. Anyone for attention on then additional chief secretary Sitaram Kunte who was accused by an IPS officer Rashmi Shukla of phone-tapping and who instead of being probed or punished has been rewarded with the post of chief secretary by the Uddhav Thackeray government in Maharashtra?

What do you think has emerged out of the Oxygen Audit Report on the havoc of second wave of the pandemic? Who do you think would be punished when those horrible days and weeks is being treated as it never happened? When your loved ones couldn’t find hospital beds; when those dead couldn’t find a decent pyre? Of those lives and families destroyed forever?

Were you aghast at Delhi Riots? Were you upset when India’s national flag was removed on Republic Day? How are you supposed to react when a Kejriwal or an Amarinder Singh is preparing a battery of lawyers in defence of these alleged culprits?

What is your takeaway from interlocutors appointed by the Supreme Court on Shaheen Bagh? What do you think has emerged from the committee Supreme Court had formed on protesting farmers’ angst against the three farm laws? Where do you think the Sushant Singh Rajput case, under CBI probe, is headed? How do you think commission on women or human rights has succeeded in India? Whatever happened to Sarkaria or Niyogi Commission recommendations? You wouldn’t even know of Balwant Rai Mehta or Ashok Mehta or GVK Rao committee. Or Justice Verma Committee for crimes against women. Whatever came out of Nanavati Commission to examine the 1984 Sikh riots? Or the Nanavati-Shah commission to probe the Godhra horror?

You would have vague remembrance on ghastly fate of Kashmiri Pandits in the Valley. But I am sure you wouldn’t have heard of Sangrampora or Wandhama or Nadimarg massacre against them on this blot on Indian democracy. Justice Venkatachaliah, who had headed the NHRC, is on record to have said it was a systematic/planned ethnic cleansing of Kashmiri Pandits and it was akin to genocide. Justice anyone?

The sum of this all is that powerful go unpunished in our land. There is nothing to bring them to the knees. Our newspapers choose its culprits who are not necessarily the real villains. Only a handful need to gather at your door, pick your wives, sisters and daughters, and you could spend the rest of your life, scurrying from one police station to another; one court to another. All you could hope for is a visit by a politician with a cheque of a few lakhs, filmed and presented in morning’s ad.

It’s only natural that faced with such reality, the conscientious would withdraw into their own shells; it would be futile to rouse yourself as a stakeholder in this democracy for you don’t even register. More than labour, education, health or infra reforms, its JUSTICE that need be fixed. It’s presently is mistress to powerful which is governments, judiciary and press. And the horror is, none of them could be brought to book.

Only if Modi government could do it. For this mandate won’t come everyday. Its now or never.