How Mamata is spared of allegations they level on Modi 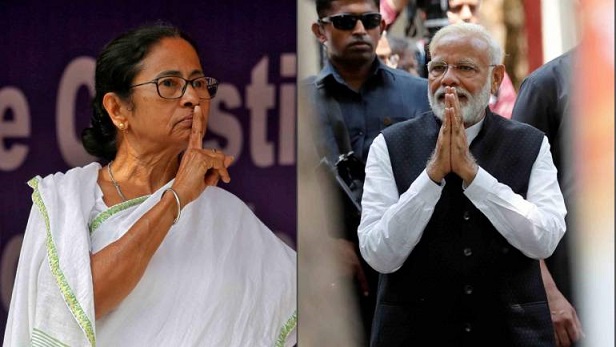 Millions of Indians today would term West Bengal chief minister Mamata Banerjee as arrogant. Or why she wouldn’t pick up the phone calls from Prime Minister Narendra Modi or returns call to state governor Keshari Nath Tripathi when crisis is as grave as Cyclone Fani or the state is sitting on a time-bomb on doctors’ agitation?

Tens and thousands of us would also call “Didi” a fascist. Or why she would jump out of her caravan and confront people who are merely chanting “Jai Shri Ram”, a matter of greeting among India’s masses?  Or why she would tell the agitating doctors to return to work within four hours or face the consequences?

Lakhs of Indians won’t deny either that she is communal in her approach, favouring Muslims and running down Hindus. Or why she would change “ramdhenu” with “rangdhenu” in textbooks? Pass the stricture that idol immersion in Durga Puja must be postponed on Muharram day?

An overwhelming numbers of us would also term Mamata Banerjee as an autocrat. Or why she would deny prominent opposition leaders, from Amit Shah to Yogi Adityanath, from landing on her turf for election rallies? Tear up the posters of BJP’s rallies? Pull up custom officials who have the temerity to stop her relatives at the airport?

A still bigger number of us would’ve no doubt that the only news emerging from West Bengal for so many days is violence.  Mamata Banerjee and her TMC must take the blame for violent politics. So rampant is the politics of blood that 34% of seats in Panchayat elections go uncontested. Or the lynchings which takes place regularly on Bengal’s streets.

None of us would also deny that Mamata Banerjee is undemocractic and unconstitutional. People (Priyanka Sharma) are jailed for posting memes on whatsapp; professors (Rakesh Sinha) is booked for inciting violence when all he has done is to visit a temple with his mother.

Millions would nod in affirmative that Mamata Banerjee resembles a dictator in Bengal. The bureaucracy is under her thumbs; police is an extension for her coercive politics and is shielded from investigations by Central agencies. She even resists interventions of Supreme Court.

Millions would’ve also heard about the ongoing Saradha, Narada and Rose Valley scams and the charges that Mamata Banerjee is corrupt. The corruption charges have engulfed her TMC party.

All too often we hear that terror network and jihadi forces are rampant in West Bengal. That terror-network Jamaat-ul-Mujahideen has taken roots in the state. The news that radicalization has taken place in madarsas in districts such as Bardhaman. That the dreaded Islamic State (IS) has named a new “emir” in West Bengal. How would Mamata Banerjee deny the allegation that she is a “secessionist” and one of India’s “tukde-tukde”gang?

Now please put all these adjectives together: arrogant, fascist, communal, autocrat, violent, undemocratic, unconstitutional, dictator, corrupt etc together. Name one person who has been called all this by India’s ecosystem in the last five years: Yes, you are right—Narendra Modi. And I challenge you to show one instance in our mainstream English media—Lutyens Media—who has ever accused Mamata Banerjee of such traits.

What is an ecosystem? Ecosystem isn’t the government in power. Ecoystem is a network of politicians, media, academicians, lawyers, bureaucrats, institutional heads, cultural czars etc who work in unison to push a particular agenda.

But now the eco-system is in a bind. The doctors’ agitation can’t be blamed on BJP. It’s people who are rising up against Mamata Banerjee’s TMC in the state of Bengal. You can resort to propaganda against RSS and BJP, weave themes on lynchings and communalism but how do you face up to the wrath of millions. It’s the people of India who stood up to the ecosystem and showed it the mirror in the 2019 General Polls. It’s the people who are again exposing this network in rapidly deteriorating West Bengal.