How many of us have gone to Jahangirpuri to know what’s happening? 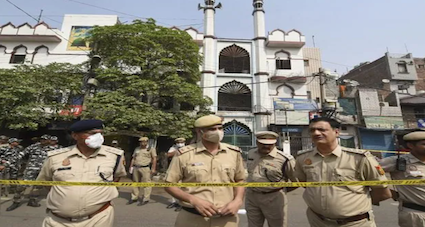 The Hebrew dubbed and sub-titled version of Kashmir Files was released in Mumbai.

The first foreign language version of a movie from India that proves so very much that we are – two Indias.

One-a citizen works day and night and dreams about building and living in his legit Home. Two-illegals encroach upon public commons and are given protection by the System.

“Truth is what people want to believe and nothing more.” –

Very early in life I had the opportunity to visit Israel. They were very helpful about documentation because my passport said I could not and should not visit Israel. The ship I was on, however, flew a funny flag and was picking up important cargo for, where else, India.

Our documents were not stamped, and for procedural stuff, they were quite happy if we signed using the names of famous Indians.

When I signed as Farhat Ezekiel, they were mystified, till I told them. The Captain, who was Pakistani but had been a cadet pre-Partition on the same Training Ship in Bombay, signed as Raj Kapoor. His passport, incidentally, had no such strictures – but he didn’t get it stamped either. We agreed on many points.

“and the righteous cowed and the evil grew bold.” – Leon Uris, Mila 18

On our way home, we sailed through Suez, where the rusting hulls of armoured vehicles and tanks still dotted the Eastern side facing the Sinai. The Egyptians have business down to a fine art – everyone is allowed with everything, as long as they pay the tolls.

“To be homeward bound, no matter what tragic memories you have harbored, is unlike any voyage a man can ever make.” – Leon Uris, Redemption

We were all middle-class people, interested more in trying to build our lives in our New countries, India, Pakistan, Israel. For a while, united by circumstances. In the evenings, with the sun setting over the mostly not turbulent and peaceful Med, we would exchange stories about our fathers. And our dreams. Of progress. Colour TVs. Faster cars. A home. Good wives. Better lives for our children. Maybe a farm somewhere like where our fathers emerged from. Seeing the world came with the job.

Communal violence is once again getting in the way of basic progress as well as the establishment of simple law and order. From what I can see, in India, Pakistan and Israel. In all three countries, that this turbulence appears to happen in other parts of cities, those which are not part of the hangouts for the middle class and higher types, does not change the fact that many of their support services emerge from those parts.

Much of this is because of oil money. And arms money. And scrap trade money. And food business control money. Gold smuggling money. Narcotics laundry money. Very secular, very religion agnostic, very mosaic. Whoever wants to make money in the game of violence, shall make money, and currently nobody is making more money than the people who have tied up the scrap industry. Especially the metal scrap industry. Whatever they were sitting on has pretty much doubled in value since the Russia vs Ukraine fighting started. So I wanted to go and see for myself why the scrap merchants were fighting.

Nothing sounds worse than an old salt blowing his bugle. Anyhow, that isn’t my story.” – Leon Uris, Battle Cry

The story is that there is this friend from a “developed country”, an ex-seafarer like myself, who wanted to know whether taking a ride in a Delhi Metro train to see what was happening in and around Jahangirpuri was going to be a good idea. In town to sell some real estate, he had already spent a few weeks “doing the needful”, and was the only person I knew who wanted to go and see what was happening in Delhi.

“Until a man is struck in his own face he does not want to believe the attack on his brother concerns him.” – Leon Uris

On the Metro train with us were, what else, some young Israelis doing exactly the same. “Your Metro trains show so much progress”, one of them said to me, and I nodded back.

“Our land has grown a magnificent liberty tree and its fruit is the richest ideal of the human soul. But, we cannot go on forever merely eating the fruit of the liberty tree or it will die. We must begin to plant some seeds.” – Leon Uris, Armageddon: A Novel of Berlin