How Melinda Gates stepped out of line 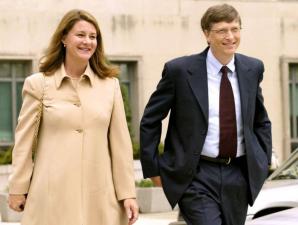 NewsBred decided to do what Indian media has been scrupulously avoiding in questioning  “Melinda Gates,” “Moody’s” and “Obama” for their comments on “horrific/growing intolerance” in India. In doing so, NewsBred caught Indian media with its pants down. Below is first of a series on such exposes which could make you give up on this “gutter” journalism. (All references are in embedded links—just click on anything you see in blue colour in the piece).

I fell down from my chair laughing—actually crying—when I read this report in Times of India of October 20, 2015:

“What is happening in India is horrific,” Melinda Gates expressed her disgust in “an exclusive interview” on miserable conditions of women in India.

That this interview was an “exclusive,” done with a Mexico dateline of all places tells us to what length the “Old Lady of Boribundar” i.e. Times of India and “world’s third most powerful women” i.e. Melinda Gates went to make their point.

You wouldn’t have read it in Times of India though that the Gates Foundation is being trialled in the Supreme Court of India.

You wouldn’t have known that a writ petition in India’s supreme legal institution was filed in 2012 by Kalpana Mehta, Nalini Bhanot and Dr Rukmini Rao (for god’s sake, search a little more for your real heroes—your so-called mainstream press will never give you access to them).

In the writ petition against World Health Organization (WHO) and the Bill and Melinda Gates Foundation (BMGF) and two organizations founded by them, PATH (Program for Appropriate Technology in Health) and GAVI (Global Alliance for Vaccines and Immunization), it is stated, and I quote:

“BMGF, PATH and WHO were criminally negligent, trialling the vaccines on vulnerable, uneducated and under-informed population school administrators, students and their parents who were not provided informed consent or advised of potential adverse effects or required to be monitored post-vaccination.”

An investigation by an Indian parliamentary committee had previously concluded that the trial amounted to a serious breach of trust and medical ethics amounting to child abuse and a “clear violation of the human rights of these girl children and adolescents.”

The committee’s report said it had been established that clinical trials of the vaccines had been carried out “under the pretext of an observation/demonstration project” in violation of all laws and regulations laid down by the government for such trials.

A little background to this you could have in this report by KP Narayna Kumar in the Econimic Times in August 2014 (how did this one get away?).

“In 2009, tests had been carried out on 16,000 tribal school children in Andhra Pradesh, India, using the Human Papiloma Virus (HPV) vaccine, Gardasil.

“Within a month of receiving the vaccine, many of the children fell ill and by 2010, five of them had died. A further two children were reported to have died in Vadodara, Gujarat where an estimated 14,000 tribal children were vaccinated with another band of the HPV vaccine, Cervarix, manufactured by Glaxo SmitheKline (GSK).”

The report stated that many of the consent forms used to vaccinate the girls were signed “illegally” either by the wardens from the hostels where many of the girls resided, or using thumbprints from illiterate parents.

(It has been an ugly truth that Indian lives are cheaper compared to Western ones in the eyes of the developed nations. Poorer Indians are routinely used as human guinea pigs by pharmaceutical giants).

Kumar points out that after these adverse reactions, a report was conducted to explain them all away and not relate to the vaccines. The idea was to market the HPV vaccine in India. That report, according to Kumar, was funded by the Bill and Melinda Gates Foundation (BMGF). Authorities in India have looked into BMGF functioning and seen a huge conflict of interest (oh, so now we know why Melinda Gates is agitated).

Activists allege that GAVI has representatives from pharmaceutical companies on its board.

“BMGF and GAVI are pushing the vaccine agenda with governments around the world, including India,” says Ritu Priya Mehrotra, professor of Social Medicine and Community Health and School of Social Sciences, JNU, Delhi.

Back to Kumar. He moves on from the HPV vaccine and writes about the deaths of many infants after they were immunized with the Pentavalent vaccine, a five-in-one shot, which was promoted by BMGF and GAVI—this even after the deaths were revealed.

“BMGF has to take full responsibility because PATH is funded by them. It is also unethical when people championing the cause of vaccines are the same ones who are also investing in vaccine development.” (Bravo!)

Dr Neetu Vashisht and Dr Jacob Puliyel of the Department of Pediatrics at St. Stephen’s Hospital in Delhi, wrote so in Indian Journal of Medical Ethics:

“It was unethical for WHO and Bill Gates to flag this program when they knew 10 years back that it was never to succeed. Getting poor countries to spend their scare resources on an impossible dream over the last 10 years was unethical.”

According to Dr Gopal Dabade of the All India Drug Action Network, GAVI has committed a $165 million grant for the phased introduction of Pentavalent in India and provides a subsidy of Rs 145 per injection for five years after which the government will have to pay the total cost of the vaccines.

So you dumb, don’t for a moment think that Bill and Melinda Gates Foundation is actually a charity.

Says celebrated journalist and author, William Engdahl: “In India, Gates, Rockfellers and WHO with their Big Pharma partners convinced the Indian government to spend some $8 billion of their scare funds, along with a tiny amount of “seed” money from GAVI partners, to vaccinate Indian children.”

And now a little fact about your “polio-free” India (you sucker!).

“Indian Journal of Medical Ethics in 2012 concluded: “In 2011, there were an extra 47,500 new cases of Non-Polio Acute Flaccid Paralysis (NPAFP). Clinically, indistinguishable from polio paralysis but twice as deadly. The incidence of NPAFP was directly proportional to doses of oral polio received.

“Though this data was collected within the polio surveillance system, it was not investigated. Instead, Gates and co. proclaimed India polio-free (kudos!).

“They ignored the fact that “polio” vaccines were killing and paralyzing 48,000 Indian children because the WHO definition of polio allowed them the casuistry.

“By calling it non-polio, they defined polio as eradicated in India. But their vaccines were killing and paralyzing tens of thousands of children.

“So by the WHO semantics the GAVI vaccines did not cause a single case of “polio.” It did cause 48,000 cases of something far deadlier and more damaging.”

Interestingly, Pakistan government conducted an inquiry (to hell with the halo of Gates) and found Bill and Melinda Gates Foundation guilty.

Express Tribune reported in Pakistan: “A government inquiry has found that polio vaccines for infants funded by the Global Alliance for Vaccination and Immunisation (GAVI) are causing deaths and disabilities in regional countries including Pakistan.”

Here is the link where you’d find what Bill and Melinda Gates Foundation is actually about—whether they are funding poor or helping rich multinationals in the name of charity.

Those who allegedly have a hand in death of so many innocents, including girls, and are facing trial, and still push their devious and profit agenda, don’t have the moral or legal ground to speak of “horrific” conditions of women in India.

And we don’t want Indian media to suck up to them and betray the very society it represents.

My esteemed friend, Shantanu Guha Ray has drawn my attention to the piece he did in Tehelka on cervical cancer. Readers would find it interesting.