How Obama inflames intolerance in India 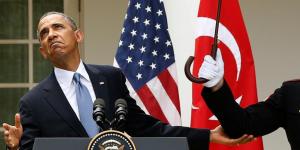 Obama talked of “intolerance” in India while US itself is in a moral cesspool. Shouldn’t he mind his own business and not refresh the story of a naked emperor? NewsBred investigates in this final piece of the three-part series.

I had to look up for Ajoy Kumar when Indian Express quoted him this week as spokesperson of Congress during the newspaper’s breathless coverage of growing intolerance in India.

“Even US president Obama has talked about this intolerance,” Ajoy Kumar tried to give sanctity to his ire against the Modi government. He also spoke about Moody’s disapproval which NewsBred took care of yesterday, as we had done with Melinda Gates a day before in this series on Indian mainstream media’s penchant for quoting discredited sources.

Before we dismiss Ajoy Kumar from this piece—he has spoken his lines—I carry this searing disquiet as to why an Indian national party should quote Obama to comment on Indian conditions. “Even Obama…” sounded as someone who has sanctity above the laws of this land. Or Congress has just let out its truth? Or Indian Express parks itself on a similar latitude. I hope I am wrong and am reading too much. Certainly though I would read my favourite newspaper with a scepticism that never existed before.

Now to Obama’s exact quotes. It was delivered as soon as he left India after attending the Republic Day parade this January.  A spell during which Indian radio, television and newspapers tripped over each other in prostrating on his feet. (Sometimes I feel centuries of servility to foreign forces, from Delhi Sultanat to Mughals to British, has robbed us Indians of our independent spirit).

So said Obama: “ (India is a) place where, in past years, religious faiths of all types have, on occasion, been targeted by other people of faith…acts of intolerance that would have shocked Gandhiji.”

Times of India had then quoted him with glee and a screeching headline: “Obama Smacks (!) Down India.”

So Mr Obama, here’s what you should be worried about your own country before you make India your concern.

Okay, let’s assume that Mr Obama, being the head of a country looking for world hegemony, sees all citizens of world as his own subjects. He can’t help but speak out against intolerance in other societies.

If that’s so, Mr Obama you must consider:

The world wonders why a constitutionally elected Obama doesn’t have a word to say on the state of citizens of his own country and whether that’s because he has an agenda to destabilize other countries, like Syria, and India, in the name of “intolerance.”

Mr Obama, your comments are intended to be tools to the forces who don’t want a resurgent, growing India. Forces who would rather have a divided, communally polarized India.

Or may be that’s the intention in the first place. But discerning Indians can read this script. We read our newspapers between the lines these days.

And please don’t take high moral ground. That’s the basis on which colonialism and imperialism has flourished in this part of the world. We know this game. We know the trajectory of this dice behind the lectures on democracy, equality and freedom.

If anything, US government is in a moral cesspool. Like ostrich you could bury your head in the sand. But the world is watching. We know the naked emperor.