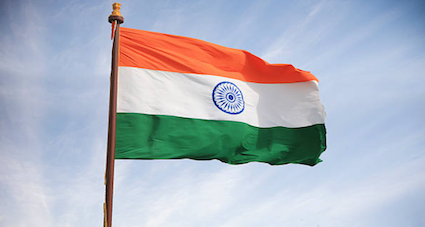 47 years ago, as a teenager not yet completed 18 years, was when I first officially saluted this flag. Known as the “Red Ensign”, flown only by mercantile ships registered in India, it meant protection as well as duty. Ships flying this flag and the people therein had the protection of India wherever in the world they went, and people on ships flying this flag also had a duty to India, wherever they went.

Some of the things some of us as merchant seafarers have done for India are never documented, nor recognition sought or provided, other than a few contact names and numbers to help get out of trouble.

(Aside – I was on one of the earliest Indian ships which did not carry the hated prefix “VT” or “Victor Tango” or “Viceroy Territories” call signs, we had switched over to prefix “AT” or “Alpha Tango” on the insistence of the owners. Why we still use “VT” for Indian flag aircraft is beyond me.)

The Indian flag, Red Ensign for us, truly came into its own in the years after the 1971 Bangladesh Liberation War. We flew it with pride, we got a lot of respect for it, and even the pirates globally stayed clear of our ships. The single word painted on the sides of the ship in bright high-visibility white or orange, INDIA, was enough and as you drew closer, the ensign flying proud added value and strength.

A similar sentiment is now observed, after 2014, simple as that.

When I returned to India in the early ‘80s, I learnt that flying the flag at home, was not really permitted. For the life of me, I could not find INDIA flag stickers in the market in India for my car, and had to source them from abroad.

But 49 years ago, I spent two years saluting this flag shown below, the “Blue Ensign”, by law and duty every time I went past the Quarter Deck. The Blue Ensign is even more powerful than the Red Ensign.

Having just been selected for a two year tenure as a cadet onboard the Government of India Training Ship RAJENDRA, I had reached Ferry Wharf (Bhaucha Dhakaa) in Bombay early, excited at the thought of setting out in my life on my own. Just about 16 years old then, waiting for the ship’s motor boat to take us from the jetty to where the RAJENDRA was moored off Cross Island, I made friends with the other early joiners – including one who had a father working on the Bombay-Goa ferry which had just about arrived at Ferry Wharf.

There, for the first time in my life, I saw and learnt about how all of us, Red Ensign or Blue Ensign, saluted the White Ensign flown by the Indian Navy. This is how it was from 1950 through to 2001.

The White Ensign then went through a few evolutions.

Every which way, as we reach 75 years, and a new respect for our flag (I am now allowed as a Citizen to, respectfully, display an Indian flag inside my personal vehicle also) this is a brief writeup on the flags, known as ensigns, at sea.

Added to these ensigns was the newest fleet arm, the Indian Coast Guard, and this is their ensign.

I salute all of them today and at the opportunity when spotted at sea or in port.