How such men pollute our minds with lies 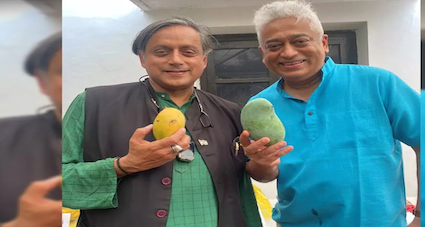 India has overtaken the United Kingdom in terms of GDP which would’ve pleased most Indians.

But then there are those who instantly went about throwing muck on the milestone; forces who run down India as long as it pulls down Narendra Modi.

Rajdeep Sardesai, who has millions of followers, prime time to himself on TV, columns in OpEds of mainstream media, preened in a tweet:

Raghav Chadha (AAP) is another who mistakes his looks and smart attire for intelligence for he dashed off a similar tweet to Rajdeep Sardesai.

There are many other such names you and I are familiar with who blurted similar misgivings so just limit ourselves to two more, Shashi Tharoor who aims to be Congress president, and Sanjay Jha who these days has no takers but for a few news channels nobody watches. Tharoor and Jha, with all the pomposity they could command, had similar tweets. (here) and (here).

An economist would straightaway tweak their ears for equating GDP with Purchasing Power Parity (PPP). Or that our rupee stretches further than a Dollar or Pound on matter of daily routine expenses.

A twitterati, @AdiMehta_GM, broke it down in simpler terms for those innocent on economics, targets of our Chadhas and Sardesais.

Simply, what we buy in India with Rupees costs 10 times more in the West. Going by the logic of the moaners, India’s economy is $14 trillion dollars and not just $3.5 trillion which is making their heartbeats irregular!

Now that should tell one that Indians have far less “Cost of Living” compared to UK. (Now, please don’t confuse it with “Standard of Living” which could be anything and not a matter of survival).

Cast a glance at world’s GDP and Luxembourg, Qatar, Singapore do much better than the United States. China might be the second largest economy of the world but in terms of per capita income its 77th, behind the likes of Botswana and Costa Rica and barely past Maldives.

So what are we to infer? That the US and China are no good to Botswana and Qatar of our world?

There is another duplicity of these pathetic public figures.

When India was successfully combating Covid with indigenous vaccine, they were deriding India’s deaths (5.8 lakhs) with the low numbers of Great Britain (1.8 lakhs). Then there were putting aggregate over percentage of the population. But when it’s economics, they are flipping the argument to suit their own deviousness. Why not credit Modi for saving 140 crore Indians?

Let’s look at the matter from another perspective.

These so-called intellectuals, while pummelling India on fossil fuels, browbeat us with total Co2 emissions. But in order to wag the tail in front of West, who for all we know looks after them, they evaluate the environmental damage caused by G7 in terms of per capita!

So for all those who are taken in by a Sardesai or a Tharoor, for god’s sake log in to places where they are shown in their true colours by erudite and knowledgeable fellow beings. Don’t be a sucker to them. This is the same set who you associate with those doubting our soldiers “surgical strikes.”  They don’t gel with the upbeat narrative of our country.

Their power is your ignorance.

Go and render them powerless.

But then why stop at these non-economists—though Tharoor could bristle at this denial. Even someone like Kaushik Basu, former chief economist of the World Bank, who makes no effort to hide his servility to our Grand Old Party, tweets that India’s present achievement should be credited to Narasimha Rao and Manmohan Singh governments. In a hardly veiled criticism of Modi, he says: “It’s like a relay race won in spite of the last runner.”

Now this is the man who was shedding copious tears during Covid days; claiming economy was in ruins. So to blame is Modi and to credit Manmohan Singh—Basu is adept at making facts malleable.

Basu, but then why stop at Raos and Singhs? Why not credit Nehru? Or even Britishers or Mughals. Could we bring in Ashoka and Akbar too?