If India Burns (Part II): No longer a question now that Nadda has thrown down the gauntlet 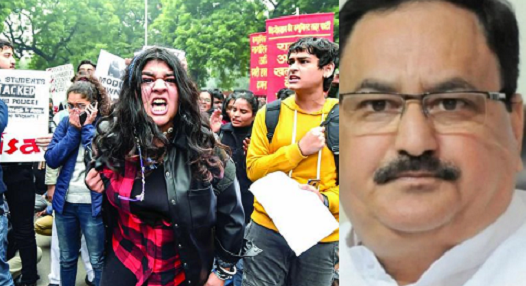 (This is the second part of “If India Burns”, a grim picture of coming days, a forewarning for all of our stakeholders: Majority, minority, government, judiciary etc. No less us, the ordinary citizens. I am excluding media for apparently it couldn’t care less. The first part could be read here).

This glimmer of hope which I mentioned in the first piece has been offered by JP Nadda, Bharatiya Janata Party president, who has announced in Bengal that Citizenship Amendment Act (CAA) has only been given a pause due to Covid-19 and that it would be implemented once it’s over.

Let’s admit, for or against, we all were traumatized for months by anti-CAA protests. I doubt if any one of us, in any part of the country, wasn’t held up by protestors on streets at least once. Even Supreme Court came down to public relations. No solution seemed feasible. Until Coronavirus intervened.

Now Nadda has thrown a challenge: Government isn’t backing down. Maybe, the Centre feels it won’t be taken by surprise. Maybe it feels it now knows how to deal with trouble-makers. Or with their chorus party of European Union, US Congress and the UN. “Urban Naxals” are facing the heat in our Courts; Khalids and Zargars face years in jail; Yogi Adityanath has worked out how to name and shame etc, etc.

But does the Centre know enough of how the “trouble” would respond? Have they got, as they say in cricket or in war, all their bases covered? Have they kept a watch on how protests have shaped in Hong Kong and Bangkok, not to say in the United States during BlackLivesMatter anarchy?

In Hong Kong and Bangkok, these are leaderless protests. No forewarning like you got in JNU, Jamia or Shaheen Bagh. A flashmob gathers and before the anti-riot police could bring in their water cannons, they are holding fort somewhere else, a fluid crowd as it were. “Be Water-like” is the guiding principle. Authorities could never be on top of their game.

So these days, they communicate in close offline chat. If it’s WhatsApp in India, it’s Telegram in our South Asian neighbourhood. You get detailed messages on how to pack and where to assemble. There is now goggles, umbrella, masks, sun-creams, water bottles and of course helmet in your backpack. Youngsters in their “rebel” age are enthused to be part of a converging, swarming mob of youth. They get overcome with emotions. To hell with the cause. The hide-and-seek with the police has its own thrills and a sense of accomplishment. Your friends are going, what are you waiting for?

Leaderless yes but it’s not to say that this ProtestNext generation is devoid of symbols. A “Milk Tea Alliance” has sprung up in our neighbourhood of Thailand, Hong Kong and Taiwan. Its aim is to spark protest across Asia: Like they did with “Arab Springs” in MENA (Middle East North Africa). Topple governments, cause anarchy and bring the region to its knees as Middle East presently is.

They have created their own characters too: animated ones like Milk Tea Girls which are emblazoned on T-Shirts of various colours and sizes. Youths who are not part of this fluid mob nevertheless wear it to show solidarity. Suddenly 100s becomes 1000s and that into tens of thousands. It’s on top of everyone’s head.

Then there is this three-finger salute (see image above). This has been co-opted from Thailand’s Hunger Game movie series. This gesture is for people, by people, from people who are facing injustice that the “protestors are in sync” with them. That they are all speaking for each other.

The drawn face-off first time in India would be different this time. The showdown is inevitable, more so since Modi government wouldn’t backdown what the Parliament has authorized and the Constitution demands. India’s protestors, while they vouch for democracy, sanctity of Constitution and supremacy of judiciary, would junk it in every action they do. So would our discredited politicians and prepaid media. It could be CAA one-day, farm bills next day and a Hathras next.

It would take some effort from the Modi government to be on top of its game: Nigh impossible in states like Bengal, Kerala, Rajasthan and Punjab where law and order is in the hands of Opposition: Much like in the United States where largest violence and loot during the BlackLivesMatter protests happened in states controlled by Democrats. BJP won’t junk CAA, an assertion of its raj-dharma, but it would need to think on its feet: Its police, cyber cell, intelligence and enforcement agencies need be bigger in numbers, resources and resolve. That alone would douse the fire if India Burns which seems inevitable.