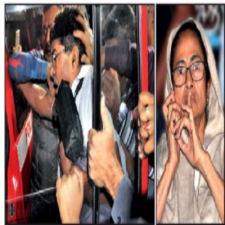 This is an appeal to all Indians to leave aside their political, ideological or religious affiliations and look closely at ALL THE ACTORS in the ongoing West Bengal saga with hands on their hearts. Anything less could be an approval to anarchy, civil war and even partition of the land we call India.

West Bengal chief minister Mamata Banerjee says that the Central Bureau of Investigation (CBI) officers descended on controversial state police chief Rajeev Kumar’s residence without a search warrant in Kolkata. It contradicts the CBI claim that they had the necessary papers. Even Kolkata police says that the CBI officers had documents and they were taken to police station for its’ verification. Paper or no paper, Section 165 of the Code of Criminal Procedure permits CBI to go for a search without warrant. CBI also doesn’t need permission from the police in case of serving summons. Further section 41 of the CRPC empowers CBI to make arrests even without warrant.

CBI has made claims before the Supreme Court that the West Bengal government “arrested our officers and kept (them) in alleged custody.” They also claim the CBI officers were manhandled (above picture, courtesy Times of India, appears a proof). The CBI offices at Salt Lake and Nizam Palace, as well as residence of joint director Pankaj Srivastava was surrounded is also a fact.

Mamata Banerjee may have decided that CBI wouldn’t be allowed in West Bengal three months ago but in case of ongoing investigations, CBI can’t be stopped. On the face of it, its’ stopping a government official from discharging his duty. Detaining and arresting them, if anything, is far more grave matter.

Mamata Banerjee would be hard put to explain (a) why the CBI officers were stopped and detained; (b) why she herself had to descend on the police chief’s residence in the middle of the drama; (c) What has Modi government to do with the orders of the SC to CBI to investigate the scams; (d) why her police chief Rajeev Kumar wasn’t responding to CBI’s more than one summons in recent past; (e) why her actions it is which is damaging the “Constitution and institutions such as CBI and Judiciary” and not the other way around.

Police commissioner in question Rajeev Kumar as well as several senior police officials and bureaucrats then sat with Mamata Banerjee in dharna as a mark of protest. It is flagrant violation of All India Service rules. They can’t be seen assuming a political role. Since they are employed by the Centre, it can, and must, come down hard on this gross misconduct. It’s an open invitation to anarchy when serving officers ally themselves to political prejudices.

Action might also be deemed pertinent against the police officials, including the ordering authority, who obstructed CBI officers from discharging their duty and wrongful confinement. It’s a gross obstruction to investigation as it amounts to shielding crime or criminals.

The Supreme Court would have to give its ruling on the matter on Wednesday. Chief Justice of India Ranjan Gogoi has said: “If the CBI lays a single piece of evidence or any material to show that any authority in West Bengal or any police officer is engaged in tampering with chit fund scam, we will come down so heavily on them that they will regret it.” In my humble opinion, SC not only should rule in favour of CBI but also pass stricture against the West Bengal government for the ugly drama which unfolded in Kolkata on Sunday night. The citizens of this country would be watching closely.

West Bengal governor Keshari Nath Tripathi has summoned chief secretary and director general of police for discussions. All the evidence suggests that the state government not only defied the SC whip and held up CBI officers from discharging their duty, obstructing investigations but have also floated a dangerous precedent where state governments, police and bureaucrats could similarly defy the Constitutional structure promoting anarchy, civil war and secessionist tendencies in India. For when did you last see Police vs Central Reserve Police Force against each other on the streets?

Tripathi would’ve to forward his report on the matter to the Centre which could include recommending the President’s Rule. If the governor does so, the Centre would’ve no option but to dismiss the Mamata Banerjee government in West Bengal. In all probability, Tripathi would’ve had to wait for SC’s fresh directive on the matter which is likely on Wednesday. If West Bengal still defy the diktat, it would be a fit case to recommend President’s Rule in West Bengal.

Prime Minister Narendra Modi and his BJP government would keep a close eye on the developments. As things appear, Mamata Banerjee is spoiling for a fight. May be she believes that if  her TMC government is dismissed, she could ride the sympathy wave and with opposition behind her, project herself as Prime Ministerial candidate in General Elections. She is eyeing a bigger prize. Should Modi oblige her or let her continue to rule West Bengal? The first option would be just for the integrity of the nation; the second could only be political prudence. Once Modi had said: Sarkarein aati jaati rahengein; desh bacha rehna chahiye (Governments would come and go; the nation should remain). It’s time to walk the talk. Or, every state government could hold Centre and thus India to ransom. India broken up in parts could be the outcome. That the CBI has claimed the investigations could lead to far more grave findings than just chit fund scam (Do they imply the hold of Jihadi forces?) is scary.

Keep an eye on all the opposition leaders—barring Left and possibly Mayawati, the former looking to regain its lost turf in West Bengal and the latter, for fear of being upstaged in the race to be Prime Minister—who are throat-ing their support to Mamata Banerjee. Only yesterday they were accusing Narendra Modi for killing India’s institutions. The autonomy of CBI is not important to them now. The sanctity of the Supreme Court matters little to them. The anarchy, possible engineered riots or civil war isn’t the top concern. Bewoe the fate of the nation in case they happen to be at its helm anytime soon.

The media. Read your newspapers closely. You won’t find retired solicitor-generals, judges, erudite columnists penning their pieces. They have no qualms in twisting the facts and make it appear a TMC vs Modi fight even when the latter had little to do with the SC directive. Read your Shekhar Gupta, Sagarika Ghose, Rajdeep Sardesai, Barkha Dutt etc to know what’s their stand on the matter. Know all who you think stand for the unity of this country and the law of the land—and those who don’t. This is as good a time as ever to mark them out.