Imran Khan: An egotist who only loves himself! 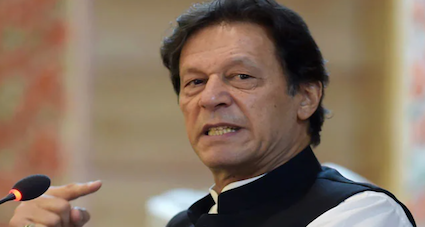 The mood outside the Pakistani mission in Delhi’s Chanakyapuri looks very gloomy even as heavy traffic was moving on the both sides of the mission. The stunned world still could not come to the terms with the farce that was committed in the parliament of India’s next door neighbour. Now of course, its back to square one.

The mood, perhaps, in the high-commission building reflects the mood in Pakistan where the voice and wishes of majority of people were muzzled by the Deputy Speaker of the national assembly, Qasim Khan Suri, who considers Imran Khan as his mentor. And dutifully and shamelessly, Qasim Khan Suri declared the motion for a no-confidence vote against Imran Khan Government unconstitutional and part of a plot by “foreign powers” to interfere in Pakistan’s democracy. Even before the Parliament was to vote on no- confidence motion, there was a fear that the ruling party [Tehreek-e-Insaf or PTI] will use unconstitutional means to avoid the vote of no trust. And the fears proved right.

Of course, the job of Speaker is to count the votes, not to decide whether any opposition party member(s) is some part of a foreign conspiracy. He cannot just throw out a motion of no-confidence. It is really difficult to recall any elected civilian government in the past making such a brazenly unconstitutional move. What effectively happened is the Pakistan Tehreek-e-Insaf party has replaced the will of the parliament with the whim of the speaker.

What is really dangerous is that the government itself, which is tasked to protect and implement the constitution and law, was comfortable violating the constitution to stay in power. Here the whole soap- opera exposes the fragile nature of Pakistan’s constitution.

Honestly, there is no constitution in Pakistan. It is the Army, which is called the establishment there, is the constitution of the country. The Pakistan is not run by the parliament. It is monitored and run from the headquarter of Army from garrison town of Rawalpindi. This is a fact.

The most hilarious part of the drama is that post fiasco in the parliament; Army says it has nothing to do with the political crisis. “We have nothing to do with what has happened today [in parliament],” Inter-Services Public Relations (ISPR), the military’s media wing, said in a statement.

Pakistan is definitely unlucky that it does not have the constitution that we have in India. The Dr. Bhimrao Ambedkar and his team had given India a constitution that is deeply respected by Indians as it protects the rights of every citizen of the country. The strength of the Indian Constitution is that it protects the rights of people from humble backgrounds. Thanks to it, people from very poor and humble background have becoming president, vice-president and PM of India.

Of course, it is the strength of Babasaheb’s Constitution that a gentleman hailing from deprived and exploited class has become the president (Ram Nath Kovind), while the vice-president ( M Venkaiah Naidu) is from a farmer’s family.

And talking about political crisis in Pakistan, one has to admit that the  whole drama was enacted very nicely. In the process, the world has seen the true colours of cricketer turned political leader Imran Khan.

In order to save his government from imminent defeat in the floor of house of the parliament, he started talking about the “threat letter” he claimed to have received from a foreign country against him. This self-obsessed leader projected himself as a martyr for the cause of his country. And his laughable 45-minute-long speech just three days before the parliament had to meet for the voting of no-confidence vote would be long remembered. During his address, he talked about certain important things, but most importantly, about “himself”.

During the live speech, Imran Khan referred to himself about 143 times. This makes it three times on average per minute.The most used word PM Imran Khan used in his speech was “Main” (me) which was about 88 times.The second most used word was “Mujhay” (me) which was used 17 times.The premier used his name “Imran Khan” about 14 times in the 45-minute speech.He used “meri” (my) 13 times in the speech and “mera” (my) about 11 times.

And very surprisingly during the political crisis, Imran Khan had started praising  India’s independent foreign policy. Imran Khan Watchers know that despite he got love and affection from millions of cricket fans of India and money for the hospital that he built in the memory of his mother; he was never generous enough to acknowledge that. And shockingly enough, he took lot of time to accept that the 26/11 terror attack in Mumbai 2008 was perpetrated by Pakistani terror group Lashkar-e-Taiba (LeT).

But, he failed to book the perpetrated of deadly Mumbai terror attacks. Once he only said, “We also want something done about the bombers of Mumbai. I have asked our government to find out the status of the case. Resolving that case is in our interest because it was an act of terrorism.” Sadly, he did nothing even as the mastermind of the Mumbai attack LeT Commander Zaki-ur-Rehman Lakhvi was released on bail while a nine-year trial has dragged on for six other suspects in Pakistan with no result. Frankly speaking, he was only doing a lip service when he condemned the Mumbai attack. Once   his ruffian like Home Minister, Sheikh Rashid was admitting in a public function that Pakistan was responsible for the Mumbai attack—and Imran Khan was acknowledging the admission with a smile.

He was forgetting that Parmeshwar Godrej, the Mumbai based billionaire, and many Bollywood stars were supporting his hospital project in a big way. But, you cannot expect anything from him as he is a rank ungrateful guy.

Finally, the toiling people of Pakistan deserve an Indian like constitution that protects people and institutions without any fear. And it’s upholder could never be Army.

SS Lee, the reclusive Chinese-Indian cricketer, will be missed

Who’s afraid of OIC, the toothless body binding on none?