In this hour, let’s be with families of murdered BJP-RSS workers 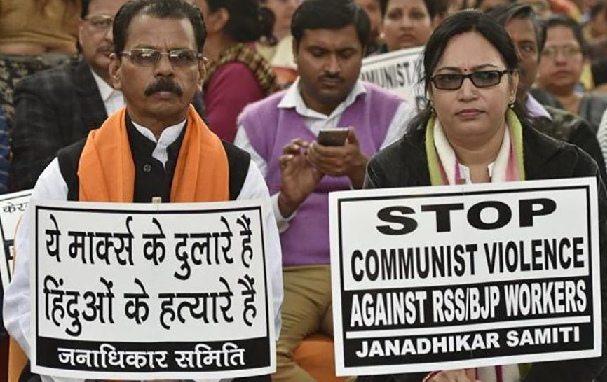 Twitter is a great community for it affords you a 360-degree perception. In the wake of Exit Polls and unanimity on Modi’s return, NewsBred has shortlisted a few tweets which are great ones for readers to revel and reflect upon.  There have been so many hues and shades to 2019 General Elections that a bird’s eye view is hugely rewarding.

It indeed is a joy to read that the first thoughts of NDA and those who stood by it should be with the murdered BJP/RSS karyakartas in the state of Bengal, Kerala, Tamil Nadu and Jammu and Kashmir.  A public remembrance by BJP, followed by donations to their families, is in fitness of things.

I will request all volunteers, Common man and @BJP4India if they win majority by its own. Then I am not stopping you from doing party but please prepare a list of Karyakarta who martyred in Bengal, Kerala or any part of Bharat and donate some share of enjoyment in form of Money.

While on Bengal, it must be said that Hindus of the state showed great courage in standing up to the repression of TMC and its’ head, Mamata Banerjee.  But for the Bengali Hindus support, the surge of BJP wouldn’t have been possible.

And if Left is to get no seat in West Bengal? Wouldn’t it be a seminal moment in independent India?

If indeed Left ends up with no seats in West Bengal, wouldn’t it be a seminal moment in India’s history. They shaped our journey so far; their 59 seats in 2004 and alliance with Congress, sank Vajpayee.

Similarly, there was much noise about the Dalit-Yadav combination and the hope that Samajwadi Party (SP)-Bahujan Samaj Party (BSP) combine would puncture BJP’s hopes in this election.  But if Exit Polls are to be believed, the Yadavs votes haven’t been transferred to BSP; and the Dalits haven’t gone to SP.

Dalit votes didn’t transfer to SP for sure and yadav votes didn’t go to BSP .. they all voted for BJP .. if they are getting 65

What if Rahul Gandhi has lost Amethi?

How much role Sabrimala has played in flaring up the Hindu anger?

We may be underestimating the quiet anger over Sabarimala in south India.

Wouldn’t 350 seats would give NDA enough power to make amendments in the Constitution long sought by the people of this country?

350 is two third majority in parliament, means constitution amendments will be a cakewalk ðŸ˜€

Isn’t it also a vindication of notebandi (demonetization)? Hasn’t the bait of Nyay been rejected?

We have curious case of Kejriwal (0) and Chandrababu Naidu (4) with only around four seats between them deciding who would be India’s next Prime Minister?

Why no credit to Omar Abdullah (NC) and Mehbooba Mufti (PDP) too who with their separatist comments stoked the anger of rest of India?

If exit poll results come true, we should thank @OmarAbdullah‘s NC #JehadiMehbooba‘s PDP & Hurriyat for convincing voters across India that we need to elect a party that has the potential to “fix” Kashmir issue by scrapping 370 & 35A as a start. No more parasiting on our money https://t.co/u9EZYME23E

If Kamal Haasan has his nose drubbed in dirt, wouldn’t it tell us a thing or two about the kind of wind blowing in Tamil Nadu, not always hospitable to Hindu ethos?

And finally, hasn’t the chowkidar nabbed the chor?

If the #EXITPolls2019 numbers hold up on May 23, the chowkidar would have nabbed the chor