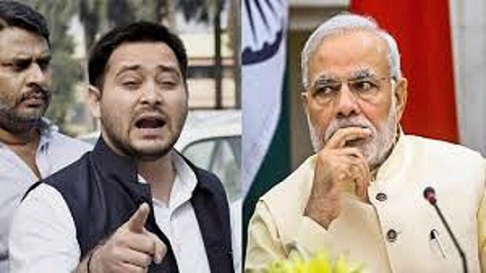 Amidst the first day of voting in Bihar, Prime Minister Narendra Modi geared up for his three consecutive rallies in the state. He first addressed a rally in Darbhanga and urged people to vote wisely. He highlighted the fact that BJP-NDA’s motto is to fulfill all promises that it had made in its manifesto.

The Prime Minister also called for a resolve to defeat those who were looking for the return of “Jungle Raj” in the state.

Modi mentioned RJD, run by Yadav clan, first by patriarch Lalu and now by his, ran the state poorly when in power. Farmers got a raw deal. He also attacked the other Opposition that they had no model nor any experience to run the government.

Later on, he addressed his second rally in Muzaffarpur and explained how it would be disastrous for the people of Bihar if they let RJD come to power again.

“The party which is infamous for closing down industries of Bihar is today promising development to the people of Bihar. Let alone government jobs, if they come to power even private companies will flee from Bihar,” the Prime Minister said in Muzaffarpur.

The PM also said that opposition leaders are the same people under whose government crime was rampant in the state. He said the ongoing elections would decide the fate of Bihar for the next few years and people should cast their vote wisely.

Praising the accomplishments and achievements of Nitish Kumar-led NDA government, Modi asserted that modern infrastructure is being brought to the state, the poor were looked after, and the government has also created several opportunities for private companies. Modi highlighted that they will be working towards increasing more employment opportunities in the state for the youth.

The Prime Minister is presently addressing his third rally in Patna.