India’s Golden Age in Cricket is upon us: We need to respond in kind 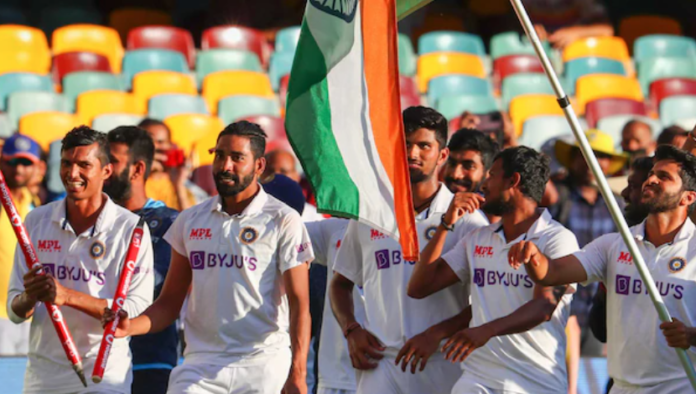 How do we honour these boys when they touch down India. Should we carry those parents, brothers and sisters on our shoulders from the little bylanes they still live in obscure cities. Could Republic Day parade should see our prime ministers and presidents stepping aside to these two dozen men. Is there still time to revise the Padma awards list for 26th. A stamp for them. All those lanes which head to Rashtrapati Bhavan bearing their names.

Money sacks won’t show the gratitude. Those who’ve dealt in courage and spirit, soared past the limitations of mind and memory, made a billion-plus people forget their caste, creed and regional narrowness, shown what an India Together could do, deserve a brotherhood in return. These 20 nothings are telling us: We could do better.

I watched today like I haven’t for years. Going to lunch with one-down, still 145 runs too far at tea; when a draw would’ve been just as sublime, these boys were conjuring up a liberation from the bondage which we sons of British India citizens took as our destiny. Neither did Aussies believe we could do it. Bouncers and more bouncers, sledging and more sledging was aplenty. Yet, these Gills and Pants and Sundars, were either deaf to abuses or idiots to injuries and certainly illiterate not to know that Aussies don’t lose at Gabba. Didn’t they know that the pitch was sweating under covers the whole night prior due to rains?

My heart often leapt out of layers of my woollens. Those four fours in the 46th over against Mitchell Starc; four balls to lunch and yet that rasping upper-cut by Gill all the way scattering sun-soaking kit which cricketers often put outside ropes, when Paine ignored his DRS infamy to seek a caught-behind review against Mayank Agarwal; when anticipation creeped in with 100-odd from 19-odd overs; 75 from last 15; 55 from last 11 and yet next three overs producing only 5 runs. I thought Indian cricket was returning to its stereotype.

Imagine the stage. That lion of a fast bowler Pat Cummins, who bowled one fourth of the day’s overs, steaming into Washington Sundar, new to the crease. Every delivery is a climbing menace. But here our Sundar has just stepped across, swivelled on his hip, both feet above the ground, and hooked him deep into the stands. Next one is a boundary too, steered through slips.

From there on, the tide turned imperceptibly. Fifteen runs in the next took India past 300. India took only three more overs to get to 328, still with balance of three overs. Never mind losing two of its men in these heart-stopping moments. But there was no cuss world under the breath against the departing Sundar or Thakur. What if Sundar was attempting a reverse-sweep: Who were we to doubt these boys who were holding us by finger into these unchartered fields of our decades on this earth. Why not soak the wonder than be under the crushing burden of your fatalism.

There is a reason why I don’t want to dwell on individuals. This was Team India, new faces—only 3 from Adelaide were part in Gabba—with indestructible will and heart;  in which skill and courage played no small part. An India which can’t be shackled by propaganda and politics; and the identity-venom which is shrinking us every living moment.

In time to come, we would paint and post and plaster on the wall that straight drive from Pant off Hazlewood that scorched the sacred grass of Gabba to the boundary. That iconic six of Mahendra Singh Dhoni in 2011 World Cup final would now have a company.

As for cricket, this might not be the greatest Test match, nor the greatest innings but it certainly is the best all those whosoever has donned the whites in history, be it in England or South Africa, Caribbean or Asia or Down Under, to have produced with such scant resources against a rampant team, with one of game’s finest ever attacks in conditions which makes cricketers give up cricket.

For all we know, this could well be the dawn of Golden Age of Indian Cricket.

This is time for me to rekindle my old affair.