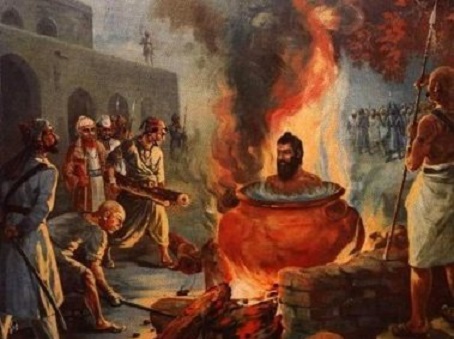 To find this in history books you will have to go North, to Mongolia and Russia, to figure out how Genghis Khan ranged far and wide all over Europe – including Russia in the winters, something that eluded all other potential invaders, including the Germans in World War 2.

“How was this possible for a land of 2 million illiterate nomads? The answer was a quantum leap in military technology, which brought mounted archery to its acme. The speed and mobility of Mongol archers, the accuracy of their long-range shooting, their uncanny horsemanship – all allied to Genghis’s ruthless ‘surrender or die’ policy and his brilliant perception that this gave him the possibility of living off tribute from the rest of the world – combined to make the Mongols unbeatable.”

The Mughals, with or without the Persians, were no better. Though they did not meet with as much success, largely because no single Mughal leader was capable enough to handle a vast territory like India, with Indians of all sorts happily rising against them at every opportunity, while simultaneously watching his back from the dozens of siblings, step and half siblings, and especially a harem full of step-mothers and wives.

The European Colonials were no better, especially the earlier arrivals, the Dutch and the Portugese. To get to learn more about Dutch cruelty, you just have to go walk-about on both sides of the Malacca Straits, Indonesia and Malaysia. There is enough online about the subject but this Chinese version of the Dutch and Portugese entry into far-away Malacca is fascinating for the other reference points it opens up.

And to learn more about the Portugese, go no further than Goa, without getting stuck in the stories laid out for tourist traps. Here, as an adopted son of Goa, who stays away from the aforesaid tourist traps, I could help write a book, but briefly – crown, cutlass and cross all three got together to put an end to all sorts of Indic commerce in the Indian Ocean.

Portugese cruelty in Goa and Africa is worthy of a separate series of articles, but to put it briefly – the Portugese did not spare even the resident Indian Christians (Syrian Christians, mostly) and either disposed them off, or sent them into the mountains of the Southern Western Ghats, now known as Kerala Hills. Till then, check this out, on the Goan Inquisition.