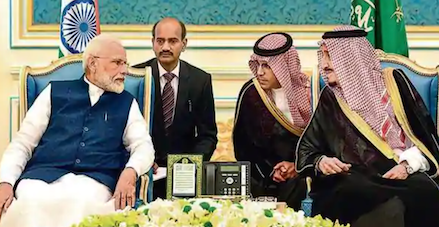 India and Saudi Arabia could soon conduct a first-ever joint naval exercise to enhance their maritime security which indicates the growing bond between the two nations.

India and Saudi Arabia have also decided to join hands in defence production. An MoU has been signed between Saudi General Authority of Military Industries and India’s Department of Defense production.

Saudi armed forces have been regular in attending training programmes at India’s military institutions, including the National Defense College, the College of Defense Management and the Defense Services and Staff College.

In essence, India-Saudi Arabia defense cooperation has picked up considerably. Both countries are ascending powers and major players in their respective regions and are natural partners in addressing the various security challenges confronting the region.

The dynamics between Saudi Arabia and India gained momentum when former prime minister Dr. Manmohan Singh signed the Riyadh Declaration, elevating their strategic partnership.  It was followed by the defense minister, AK Antony’s visit to Riyadh in 2012  which also holds a special significance for the country as he was the first Indian defense minister to Riyadh. The two sides also agreed to form the Joint committee on Defense cooperation which, till now, had held four meetings in – 2012, 2016, 2017, and 2019. Marine security and discussion about naval engagements have been the primary topic of these discussions.

As can be seen, but for signing the Riyadh Declaration, little happened on ground between India and Saudi Arabia during UPA-2. Things have only picked up since Narendra Modi took over the reins in 2014.

Saudi Arabia has participated actively in the region’s overall maritime security. India, by its geostrategic location and energy interests, has played a major role in securing international trading routes in the region. To further augment maritime ties between New Delhi and Riyadh, Admiral Sunil Lamba, chairman of the chiefs of staff committee and chief of the naval staff visited Saudi Arabia in February 2018, during which he met the Saudi Deputy Defense Minister Mohammad bin Abdullah Al-Aysesh as well as the heads of the various military services

In a historic first, Gen. M.M. Naravane, chief of the Indian Army, undertook a landmark visit to Riyadh in December 2020. His visit was aimed at strengthening defense ties between the two countries and exploring further possibilities for cooperation.

Since Narendra Modi became the prime minister of India, there’s been a substantive shift in the strategic partnership between Saudi Arabia and India. Despite the complexity of governing a country the size of India and navigating its dizzying domestic politics, Modi has managed to visit more than eight Middle Eastern countries and territories since 2014, more than his four predecessors combined.

Modi has adopted an aggressive strategy with key regional powers of the Middle East—Saudi Arabia, the United Arab Emirates, and Israel. He has built close bonds with young Gulf leaders, including with the crown princes of Abu Dhabi and Saudi Arabia.

The bilateral partnership between Saudi Arabia and India are witnessing a new dawn. These ties gained momentum when Modi’s visit to the Kingdom in April 2016, in which he reiterated India’s intentions to work together with Saudi Arabia. Saudi Crown Prince Mohammed bin Salman’s historic visit to India in February 2019 was one of the most significant milestones in Saudi-India ties. The visit ushered a new era for Saudi-India ties and carved the way for a remarkable future. A Strategic Partnership Council between the two countries, led by the Crown Prince and Prime Minister of India, supported by ministerial representation covering the whole spectrum of strategic relationships was announced during the visit.

These cordial relations are based on mutual cooperation- for Saudi Arabia, India is the future oil market, as the experts have suggested that India is likely to overtake China in oil demand by 2024. On the other hand, Saudi Arabia has been transforming its oil-based economy to a knowledge-based economy which requires highly skilled professionals and India has been producing a large number of educated professionals and skilled workers who have been substantially contributing to the development of Saudi Arabia.

This growing closeness between New Delhi and Riyadh has come at a time when differences between Pakistan and Saudi Arabia seem to be growing. Riyadh’s silence on the Kashmir issue after the abrogation of Article 370 is a setback for Islamabad.

This was evident during Indian National Security Advisor Ajit Doval’s visit to Saudi Arabia in October 2019, when the Saudi government reportedly stated that Riyadh “expressed understanding of India’s approach and actions in Jammu and Kashmir”. The “neutral” stand is an important shift in Saudi Arabia’s approach towards India in general and Jammu and Kashmir in particular.

Terrorism has been the primary cause of concern for both Indian and Saudi Arabia thus the two countries continuously discuss to give a further boost to bilateral security operations. Both sides have regularly exchanged high-ranking delegations, including domain experts.