India won’t mind US out of Syria and Afghanistan 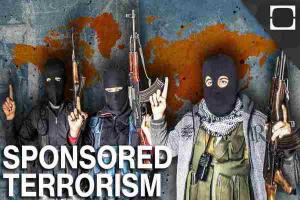 Sometimes I don’t know whether to laugh or cry.

For someone like United States which created terrorism in the 1990s that has destroyed the world– think about it: the wreckage of Yugoslavia, paid mercenaries to drive Soviet Union out of Afghanistan in the late 80s, the 9/11, the disastrous Iraq War, the nurturing of Al-Qaeda and Islamic State (IS), the transportation of terrorism to our own Kashmir, the wreckage of Middle East where leaders like Muammar Gaddaffi and Saddam Hussein were thrown off only because they chose to be independent, the muscle which allowed Saudi Arabia to wreck Yemen, Egypt (Arab Spring), Ukraine, you name it—is being egged on by extensions of this “deep state”—your international news agencies and closer home their lackeys in Lutyens’ Media—to stay on in Afghanistan and Syria. Why? Because US presence–in their worldview of brainwashing citizenry of the world– is necessary to curb terrorism!!!

United States as a nation has lost thousands of its soldiers in this “pursuit” to end terrorism, which truth must be told is nothing but to benefit its Military-Industrial Complex—read it as “deep state”—that profits monstrously whenever chaos, anarchy, civil strifes and wars are lit by its own machinations around the world. The reconstruction of Iraq after Saddam Hussein is the costliest and biggest scam to have ever happened in human history. Their generation-long overstay in Afghanistan has institutionalized the smuggling of drugs around the world which passes the Gulf and in connivance with these desert kingdoms and Pakistan’s ISI, reaches long-forgotten Africa and destroys millions of youth either sides of Atlantic and Pacific Oceans. Illegal drugs today is the third biggest trade in the world after oil and gas. You must doff off your hats to Central Intelligence Agency (CIA) for that. Don’t be deluded that the big cat called CIA is funded by the meagre funds of US Congress. It’s this illegal drugs trade which allows them the muscle to buy and destroy the world.

But trust our newspapers and news agencies to spin a completely different take on the issue.  Ask them if you must that why they published with glee the pictures of Islamic State swords striking their handcuffed, face-covered victims on their front pages but reduced the news of disappearance of Islamic State, a few years down the line, as a snippet inside their news pages. Shouldn’t it have been a cause of celebration? The middle-pages spread? The distinguished edit-page writers? All those South-Pacific-Human Rights-blah-blah Foundations which plant expert pieces in our newspapers? And why we must not treat them as nothing better than extension of this “deep state”, funded and controlled by them.

So when Donald Trump wants to put “United States First”—trying to haul out its thousands of military youth rotting in deserts, inhospitable conditions, facing disease trauma and death, conceding that these wars and occupations were never meant to liberate those people and lands but to feed the deep, insatiable pockets of its own military-industrial complex, and its allies, causing a financial ruin to the United States, all hell has broken lose. Newspapers are aghast: how could US abdicate its responsibility of policing the world and nailing terrorism? They wouldn’t tell you the answer if you asked them whether US involvement has increased or decreased terrorism in all these decades.

It is this delusion and sense of matrix which makes them deny the Brexit and emergence of Trump. Away from their propaganda, the faceless and powerless billions of this world are acutely aware they live in a world controlled by powerful monsters who rule even their own governments. These monsters wouldn’t mind if the world goes up in smoke – as long as the money keeps rolling in. It’s this faceless and powerless citizenry which has brought Trump to US Presidentship. It’s these faceless and powerless who punctured David Cameron and won the referendum on Brexit. Forces are at work to wreck both Trump and Brexit—like they are out to damage Modi, Putin and Xi – for they are shaping a world beyond this matrix of “deep state.”  The saccharine calls for “Freedom, Liberty, Democracy” fools nobody in today’s connected world of social media.

Look at India’s English mainstream media of today. All are shedding copious tears and stoking fear that with US’ announcement of withdrawal from Syria and downsizing by half its forces in Afghanistan, India would be at peril from the horrors of terrorism. They won’t stop and question why US’ presence didn’t douse terrorism in the first instance over a generation. India would be just fine, as would be the world, if US doesn’t bestow itself with the role of interfering in the world in the name of “freedom and democracy.” And that too, without the sanctions of United Nations.

And now the twist. Do you really think the cat has caught too many mice and is willing to take a rest now? A long shot. Even as US has announced withdrawal from Syria and Afghanistan, it’s quietly ramping up its military presence in Kuwait. A secretive massive military drill is underway in conjunction with its Siamese twin, Israel. It’s again on boil on Russia and North Korea. The more things change, they more they remain the same. But if knowledge is power, let it be your only defence against these ruinous powers.