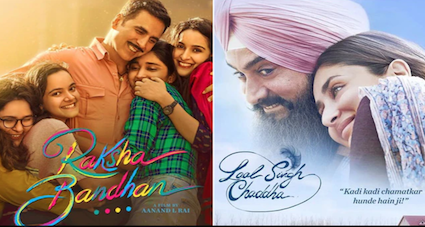 Indian Movies finally start coming of age, 75 years after Independence, and about 25 years after perception management really took over from the subtle attempts to downgrade Indian movies started approximately 50 years ago. For the purpose of this article, then, Indian movies out of Mumbai can broadly be divided into 3 phases, each of approximately 25 years.

Phase 1 – the early years of movies which, post Independence, spelt out one huge word – HOPE. In an era when India needed this the most, so that people would work towards strength.

Phase 2 – the middle years post Bangladesh when assorted attempts were made to control the movie industry by entities not favourable to India and its emerging strength. Mostly un-coordinated.

Phase 3 – very co-ordinated moves by a range of interests inimical to India’s strengths, hugely helped by the internet, and backed by corporates. India as a market vs India as a country of strength.

As India enters Phase 4, where increasingly the stronger viewer now calls the shots, attempts are being made to paint even this step forward as a religious binary. Which is simply not true. If Indians are boycotting LAAL SINGH CHADDHA then they are also boycotting RAKSHABANDHAN.

For one simple reason – the quality of the movie depends on the story, the writer, the director and now increasingly the technology. You can put monkeys, lions, giraffes, hippos, zebras, penguins and other animals as the stars –  and the movie will do well if the story makes sense to the viewer.

And in the Indian context – there are some sacred cows which we as Indians shall not see defamed anymore. Our Armed Forces top that list. Closely followed by a few other realities – religion is another big one and stereotyping categories by region for humour is another. Nor is it acceptable anymore to make tapori-type boy-stalks-girl movies anymore.

If Bollywood film-makers can not make movies that don’t defame our pillars of strength, then it is simple – we shall not spend money seeing them. Nor will we spend money buying products or services that the people behind such movies or the stars therein endorse.

In Phase 4 of our 25 year cycle of Independence, it is the viewer who has come of age, and who shall not tolerate his or her self-respect and intelligence being demeaned by crap dished out as movies. Especially but not only by UrduWood.

That era, of UrduWood, is well and truly over. If Bollywood can understand this, then fine. If not, then like some famous studios that have been sold lately for real estate and become history, Bollywood and its highly paid stars will also become history.

The viewer has decided. And it has nothing to do with what religion the viewer comes from.