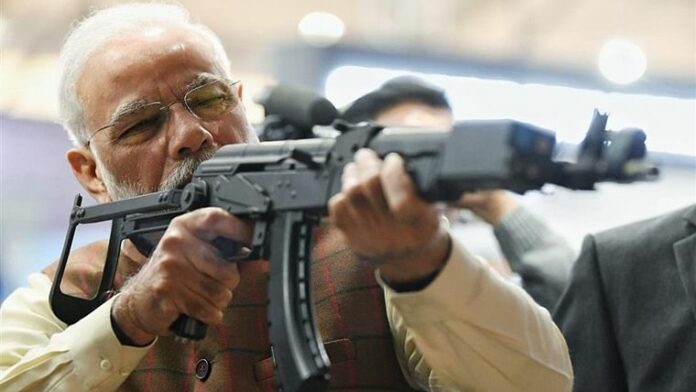 India is banking big in placing practically one indigenous Kalashnikov AK-203 assault rifle in the hands of every second soldier of its million-strong army as details are emerging from the ongoing Indian DefExpo in the northern city of Lucknow.

Though India has been swift in gaining the assistance of original manufacturers Russia in a joint venture (JV), as well as opening an arms factory for the purpose in Amethi, a district in north India,  last year, it could still miss the May deadline as a mutually agreeable price is yet to be hammered out.

Indian army is keen to place an order of 670,000 Kalashnikovs with the joint venture but the setting up of production facilities and initial technological transfer is driving up the prices of Kalashnikovs, arguably the most famous assault rifles in the world for over two generations.

The two partners of the JV are presently engaged in bringing down the cost from $1000 per rifle to something more affordable. Even though AK-203 is a vastly improved and advanced version of earlier versions, such as AK-47, the latter could be bought for a few hundred dollars in global arms market.

Delay is pause, not impediment

The delay is still a pause and not an impediment as the project is fuelled by the highest political will of the two nations, no less by the desire of Indian prime minister Narendra Modi who declared on Wednesday: “Our desire is to export (weapons) of US$5 billion in five years.”

Indigenization of weapons is also a huge priority for Modi government as the prime minister elaborated upon in DefExpo: “How long can the world’s second-largest population, second-largest army and the largest democracy remain dependent only on imports?”

India is keen on 100% indigenization of Kalashnikovs and Russia is a willing partner in the project, hoping for a complete technology transfer after it has produced the first 100,000 rifles. Once the JV sorts out the core issue of price, not an insurmountable matter given the mass production and export opportunities embedded within, the dream would take little time in becoming a reality.

India is determined to replace its INSAS (Indian Small Arms System) rifles, indigenously developed in the 1980s, with AK-203 completely in coming months. The two appear similar but vary greatly in size and impact. The Indian rifles are heavier and of lesser range than Kalashnikov’s 4kg weight and 800-metre-long firepower. It’s a huge advantage in field combats which could last for hours. Besides, Kalashnikovs have an automatic firing mode which is not the case with Indian rifles.

It’s not to say that Indian soldiers are unfamiliar with the sight of Kalashnikovs. Over the years, they have used it extensively in Kashmir where the terrorists often emerge from the hiding with the same assault rifles. The Indian army has a concept of sector stores under which those in Kashmir, and the NorthEast, are equipped with AK-47s and not INSAS. The growing footprint of terrorism within the country makes it imperative for India to include Kalashnikovs in its preparedness.

Kalashnikovs has been an iconic rifle of choice from army to terrorists to drug-lords post World War II. It’s inventor, Mikhail Kalashnikov worked out its design after being wounded as a Soviet soldier through the hands of the Nazis. He had perfected the design of his Avtomat Kalashnikova (Automatic Kalashnikov) by 1947 and that explains the ubiquitous title of AK-47 which resonates around the world.

Ironically, Kalashnikovs aren’t pinpoint accurate. They are best used in close combats as against distance engagements. But it’s rugged and easy to use which is perfect in tough conditions such as sand or mountains. It’s easy to set up and easy to repair and could last 20-40 years. Figures suggest that one-fifth of all firearms used in the world are some sort of Kalashnikovs, or over 100 million in numbers which is staggering.

India is keen to reduce its weapons-import bill which till recently was the biggest in the world but is now second only to Saudi Arabia. Figures suggest it bought over $100 billion worth of arms in 2008-17 decade. Its’ military budget is fourth biggest in the world.