Indo-Pak ties: A century of hostilities 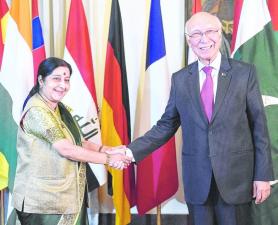 Diplomacy is at work between India and Pakistan these days. The two prime ministers, foreign ministers and security chiefs have met in places as diverse as Paris, Bangkok and Islamabad. But lest you run away with the idea that a détente between the two is possible, the three main issues of (a) water (b) terrorism and (c) Kashmir is beyond redemption. In next three decades, India and Pakistan would complete a century of hostilities. Treat them at best as a public posturing.

It’s world’s most dangerous flashpoints and we’re not overlooking Syria, Ukraine or Israel-Palestine conflict. The two neighbours are heavily nuclear-armed. It’s home to nearly a quarter of world’s population; a conflict between the two could so easily suck China and United States into its vortex; Russia and Europe wouldn’t stay neutral either. The burning lands of Middle East along with this part of South Asia would be an interminable stretch of havoc. We’re looking at a dreadful catastrophe like no other.

What makes peace so intractable between two estranged brothers who lost millions of lives in migrating horrors of independence; at least three full-blown war and countless skirmishes and terrorist attacks of unspeakable monstrosity? Both are distrustful of each other; both act as victims; both take a high moral ground and both hate using any third party’s good offices.

To be fair to India, it’s frustrated by lack of a central command in its neighbourhood. Pakistan lacks a coherent identity with elected governments, army, Islamists, ethnic and regional bosses all pulling in different directions. Economy is at brink despite the promise of Chinese investment under its One Belt One Road (OBOR) vision. The population is bursting at seams; modern educational system is dysfunctional.

India and Pakistan share a 3000-km long border. It traverses the Karakoram Mountain ranges; spread southwest through the plains of Punjab and Rajasthan; into the desert of Sindh, before dipping into the vast marshlands of Rann of Kutch and finally into the coastal swamps on the Indian Ocean. Let’s do a run on three prime, tendentious issues between the two neighbours:

Pakistan is one of the most “water-stressed” countries in the world according to the Asian Development Bank (ADB), parched at the same level as Ethiopia. It’s water storage capacity in emergency is mere 30 days. Since independence, its water availability has plunged by almost 75 percent.  By 2025, the country is projected to have 33 percent less water than required, according to a World Wildlife Fund-Pakistan report.

The water-dispute between the two nations began soon after their independence. Inter-Dominion Accord of May 4, 1948 apportioned the waters of India initially. India released sufficient waters to the Pakistani region in return for annual payments. Pakistan was unhappy soon and even wanted to drag the matter into the International Court of Justice.

By 1960, the World Bank could broker the Indus Water Treaty. Three “eastern” rivers—the Beas, Ravi and Sutlej—were given to India while the three “western” rivers—the Indus, Cheneb and Jhelum—went to Pakistan.

But since Pakistan’s rivers flow through India first, the treaty allowed India to use them for irrigation, transport and power generation. It provides water for more than 26 million acres (110,000km2), the largest irrigated area of any one river system in the world. Pakistan were up in protest again.

It alleged that India was building dams—nearly 4000 on Jhelum alone– to divert waters from Pakistan. Climate change and intermittent floods don’t help the mater. Nor the Pakistan’s government could wash its hands off the catastrophe. So poor is its supply side management structure that it loses 35 per cent of its water resources. Punjab gets more water than other regions. Excessive groundwater pumping pollutes water. Ageing water and sewage pipes are no help. Unregulated pesticides from farms seep into streams and groundwater. Typhoid, cholera, dysentery and hepatitis are chronic issues with residents of Lahore. The government did admit a couple of years ago that 80 percent of water samples taken from across the nation were deemed unsafe to drink. Illegal logging and deforestation trigger devastating annual flash floods.

Pakistan has only constructed two large dams—it loses some 20 million gallons of water a year simply by water run-off to the sea. The fallout of such misery badly hits agriculture, its backbone. The power grids trip regularly. Power cuts of 16-18 hours are not uncommon in cities of Pakistan. The population is expected to double by 2050. Pakistan truly is sitting on a time-bomb.

Images of bonhomie between two foreign ministers, Sushma Swaraj and Sartaj Aziz have made it to the front pages of dailies. This is the same Aziz who threatened to nuke India not very long ago. This is the same Pakistani civilian government who ignore, if not abet, their military’s Inter-Service Intelligence (ISI) operations to filter terrorists across the border and cause mayhem.

This July, three Fidayeen (suicidal) terrorists from across the border struck the police station in Gurdaspur. The police made short work of the siege and killed all three terrorists. A week later in Udhampur, a BSF constable killed one of the two terrorists who had taken over a passenger bus. The second terrorist, Mohammad Naveed fled the ambush but was captured by Jammu and Kashmir police. Naveed allegedly confessed of being trained by Lashkar-e-Taiba, the terrorist group nurtured by Pakistani army.

This capture was reminiscent of one of the 26/11 Mumbai attack perpetrator Ajmal Kasab in 2008. The links are too painful to ignore for Indians. The hijacking of IC 814 in 1999 by Harkat-ul-Mujahideen, a Pakistan-based extremist group forced Indian government to release three militants, Mushtaq Ahmed Zargar, Ahmed Omar Saeed Sheikh and Maulana Masood Azhar who later were found to have hands in 9/11, the killing of Daniel Pearl and Mumbai terror attacks.

Pakistan knows it best how to pin down a government with the help of terrorists. The role of ISI in infiltrating terrorists in Afghanistan and causing Soviet Union’s defeat in the 80s is too well-known. They would like India to engage in counter-insurgency campaigns on its borders for long periods, sapping it of its energy and morale.

Pakistan crated the Taliban in the early 1990s. Ironically, its breakaway faction, Tehreek-e-Taliban, has come back to haunt them in recent years. This terrorist outfit targets only army and its children; as they did to a Peshawar army school, killing 130 children almost to a day, a year ago in 2014.  So much so that Pakistan today employs 40 percent of its brigades in north Waziristan borders.

There have been too many ceasefire violations across the Line of Control (LoC) and the International Border (IB) since Narendra Modi government assumed charge in India in 2014. In October and November last year, cross-border firing caused several Indian casualties, and subsequently, Pakistani fatalities in retaliation.

Kashmir has caused three full-scale wars between the two nations. Since 1984 the two countries have had several skirmishes over the control of the Siachen Glacier. India claims the entire state of Jammu and Kashmir. At the moment, it administers 43 percent of the region, including Jammu, Ladakh and Siachen Kashmir. Pakistan has 37 percent of Kashmir, namely Azad Kashmir and Gilgit Baltistan. Both stake a claim on each other’s territory.

A little background to Balochistan. It was never a part of British Indian empire. From 1876, it was a self-governing British protectorate. In August 1947, Britain granted Balochistan independence, separate from India, Pakistan or for that matter Nepal. In less than a year, Pakistan “invaded” and captured Balochistan. Presently it has hundreds of military outposts to subdue the local populace.

Interestingly, the water issue lurks in the background in both terrorism and Kashmir crisis. Hafiz Saeed of Lashkar-e-Taiba had accused India of “water-terrorism” through its occupation of Siachen Glacier. Aziz himself has gone on record that Indian military’s presence in Siachen poses a serious environmental threat to Pakistan. General Ayub Khan in his book had linked water security for Pakistan’s ambitions in Kashmir. In 1948, one of the reasons Pakistan wanted Kashmir was for water security.