Is Covid-19 letting up out of deference to our Festivals? Or the worst is over? 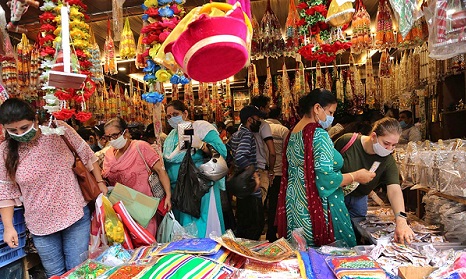 I sought out Deepak last morning. I hadn’t met him for long, at least since my daughters still used to hold my hand and walk into his teaching institute nearby. Always above the board, energetic enough to be suitable for a protein ad, and good enough in maths for Rahul Gandhi to figure out how he messes up his numbers on public platforms.

Let’s leave aside why we met. Important for you folks is his Covid-19 experience which he contracted almost to the day when we responded to Modiji’s call to sound pots and ring bells. Every inch of his bones creaked, fever raged like a tropical storm and he thinks it was pandemic. “I didn’t know where to go, the tale of expenses was scary and here I was, in my one-BHK flat, with my wife, kids and old parents. I couldn’t separate myself from them, couldn’t afford treatment and left myself—and my family–in the hands of Gods.”

Well the Gods looked after him and his family. He is fine now but still complains of nagging pain in his ankles. He feels he avoided death not because he submitted himself to good hands but only because some die and some don’t to this scourge of our times.

Now we hear that Covid-19 is in retreat in India. But it is resurging in US and Europe. Ireland has reimposed a complete lockdown; Czech Republic, Spain and France have opted for similar measures; Belgium, the Netherlands and Switzerland are some of the worst hit. The United States is beginning to hit a lakh each and so it is with France. But India smiled on Tuesday with only 36,601 cases recorded the previous day. We might still touch 10 million by December but recovery rate is above 90%.

It’s the lowest in last 101 days, since July 17 that is. In September, we too were touching a lakh positive each. Now even Maharashtra is reporting its lowest in last five months. Asia’s biggest slums in its belly are beginning to chirp. Its another matter that Thackerays have now moved from one villain to Arnab Goswami and Kangana Ranaut but we would glean on it some other day.

Why Covid-19 is dipping in India? Before you scoff at India’s testing numbers, let me tell you its one million Tests a day done across India on an average for the last few weeks. Yet numbers are dipping. Hospitals which were overflowing with Covid-19 patients are beginning to have freer beds, oxygen cylinders and ventilators. The laudable healthcare workers are even shooting videos of their dancing footwork and have one Hrithik Roshan swooning. Nurses are without PPT cover and gossiping. Intern doctors are again longing for those night shifts when the male-female ratio in whites is abnormally skewed.

Would it last? Our prime minister won’t like us to entertain such a devilish thought. He knows he hasn’t allowed Covid-19 to get out of hand—the proof is that even Rahul Gandhi has let go an issue which he could’ve harped upon for nine months. But Modiji is worried for festivals are upon us, congregations would happen on a Tablighi Jamaat scale (well almost), fairs would abound and shops would overflow. None of them could be restrained, for it’s a moment of cheer and some well-needed finances would come the way of shopkeepers and businessmen. But festivals would also onset winter, which is playtime for viruses in colder weather. Modiji has even got an official body to warn Indians that 50 per cent of them could be infected by February 2021.

I suspect there won’t be an upsurge. For the “herd syndrome” has already taken over us. There are 10s of millions of Deepaks in this country who haven’t reported the Virus to public. They have either survived—like Deepak—or died. None have come in the official count. If around a crore are to be infected soon, there are at least 20-30 crores Positive who haven’t submitted themselves to scrutiny.

It’s just not my suspicion. You might have ignored the news of a few weeks ago that one-third of Delhi already has antigen bodies. Half of Mumbai’s worst slums were declared to have been in grips of Covid-19. Away from news, this is the truth of Covid-19 in India. That the pandemic probably has run its course.

India’s numbers are not dropping because they have hit upon a wonder drug, or because our admirable healthcare staff have acquired a midas touch (well, from inside PPT that is), or Modiji has done any surgical strike on the Virus. It’s only because you and me, or most of us, have already had our brush with the pandemic.  And that this is a perfect moment when you could say: Ignorance is Bliss.