It’s unlikely the buried last Sikh king would be exhumed 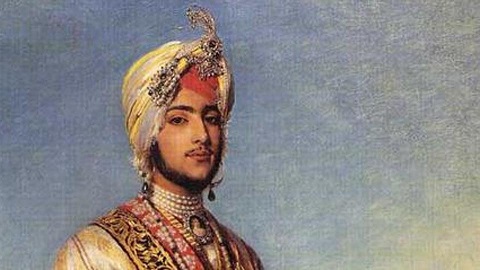 It is no small matter that the last king of the powerful Sikh empire of the 19th century is buried in a small nondescript village of 300 people in eastern England for 125 years now and voice is now being raised in the Indian parliament for it to be exhumed and his remains brought back to India.

It is also no small matter that the buried, Maharaja Duleep Singh, happened to be the son of magnificent one-eyed Maharaja Ranjit Singh who ruled over much of north and north-western India for 38 years, including Afghanistan and Kashmir, and had the ears of Napoleonic forces against the British expansion in India.

There is enough poignancy in the story of a young lad, enthroned as emperor at the age of five, falling to the machinations of British who pounced on his father’s death to usurp his empire, imprison his mother and ship him to England, converted as a Christian, and later denied his wish to return to his homeland as a reborn Sikh, Apparently, he died in penury in 1893 and buried in the premises of a small church of the Elveden village in West Suffolk district of England to this day.

It would appear strange too that neither the Sikhs, adherent to world’s fifth largest religion with 30 million numbers, nor their country of a billion-plus, has made a serious stake to reclaim a glorious symbol of their past even though a noise is often made to retrieve the magnificent Koh-i-Noor, arguably one of world’s most famous diamond, which once adorned his father Maharaja Ranjit Singh and is today part of British crown of jewels in England.

India was jewel in British crown for a reason. It lost precious stones (gold, silver diamonds etc), materials (sculptures, scrolls etc), resources (millions of men fighting their wars or out of famines) and lands (Pakistan and Bangladesh due to the Partition) in decades of rapine and plunder by the British colonialists.  Its’ economy, from a share of quarter of world’s GDP fell to three per cent during this horrific grab of their fortunes by the British.

But the grave of the last Sikh king is not the tomb of Pharaohs, like the one of Tutankhamun, which alone carried a wealth of a billion dollars, including a coffin of gold. Nor his remains could sink a Titanic which the doomsayers assert happened only because the gigantic ship carried an Egyptian Mummy among its cargoes.

The buried Maharaja is also no Christopher Columbus, exhumed multiple times around the world due to various claims on world’s most famous explorer, nor is he a revolutionary like Simon Bolivar whose remains was unearthed from Colombia and transferred to Venezuela in a fully-televised event to ascertain if the great revolutionary had been poisoned. He is also no Abraham Lincoln whose tomb was raided with the idea of holding the corpse to ransom by some horrid grave-diggers.

Neither the last Sikh king is some criminal like the exhumed assassins of Abraham Lincoln and John F. Kennedy, nor akin to a former US president, Zachary Taylor who died in 1850 but his body was disinterred in 1991 to ascertain if he was a victim of arsenic poisoning. He is also no Eva Peron or Oliver Cromwell, two of history’s most recognized names, whose remains met a fate of mystery and macabre.

In making the demand on Mahraja Duleep Singh’s remains, the specific parliamentarian, a member of the opposition, hasn’t probably factored in a few testy details: Should the remains go to India or Pakistan for the throne of the Sikh empire ruled from Lahore; the difficulty of obtaining a licence for exhumation since it’s in a property of the powerful Church of England; wading into the elaborate procedures of Ministry of Justice in England which sits on decisions on non-consecrated grounds. The parliamentarian’s demand though wouldn’t be contested by the lineage of the last Sikh emperor, none of whom are alive today.

There is unlikely to be any serious follow-up on the demands on the Maharaja’s remains. It’s politically hazardous to release a rallying symbol for a community which for over a generation is being baited by the separatists to bolster their demands for a separate Sikh homeland. It’s also unlikely that the honourable parliamentarian of the opposition isn’t aware of the repercussions of his demands. But it would at least add heft to his party’s presence in Sikh-dominated Punjab and show the ruling dispensation of Delhi in poor light which probably is good enough for him.

Death touches all of us at some stage of our lives. In some cases, it does more than once.