Javed Akhtar increasingly sounds like a Jihadi than a lyricist 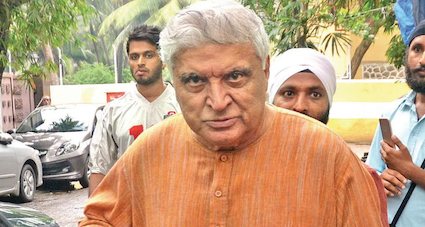 I take Dainik Jagran and there is a wonderful piece by a Hindi professor Dr Kripashankar Chaubey today which should embarrass Javed Akhtar, the Bollywood lyricist.

It so happened that Akhtar, in his latest tweet, has taken a dig at Uttar Pradesh chief minister Yogi Adityanath’s remark: “Soch Imaandaar, Kaam Damdaar.” (We are honest in our thought, and powerful in our output). Akhtar says Yogi’s quip has three Urdu words: Imaandaar, Kaam and Damdaar.

If one is generous, one would say that Akhtar is stressing that Hindi and Urdu are inseparable. If one is savage, one would construe it as if Hindi can’t go by without the crutches of Urdu. It’s a good guess that this is potshot at saffron-clad UP’s chief minister who, one could easily say, he holds in contempt. Look at it anyway, it’s a cheap shot, with an eye on his followers, and disregard for masses who still value his contribution.

Languages can never be so boxed, it borrows and lends freely, and suggesting a religious overtone to language is, well, simply obnoxious. The tweet has all the markers of a Jihadi and not a litterateur that Akhtar would like to present as his calling card.

Steps in Dr Chaubey. He informs readers that Urdu itself is a Turkish word! It too, like Arabic and Persian, is written from left to right. Urdu has 52 letters and most of them are Arabic and a few Persian.

Chaubey is an academic and not a film-lyricist and his flurry of wordy punches leaves Akhtar black and blue. Sample:

Angrez is a French word.

Turup is of Dutch origin.

The truth is if a language wants to be self-sustaining, get itself completely rid of other influences, it can’t survive. There is term colloquial for a reason. The free exchange of expressions only enlarge the scope of a language.

Even the government of India asks its ministries and secretariats to use Urdu, Persian and English words freely in official Hindi communications to make sense for employees and people at large.

Languages don’t have borders. Indeed, if you speak other’s tongue, it improves warmth and fondness between two individuals. It’s stupid to imply that one language is superior to another. That Urdu is but a language for and of Muslims only.

It makes one wonder what kind of secular Javed Akhtar is, the badge he wears on his chest with pride. It doesn’t promote social unity that he makes pretence of. It’s scary that so-called Muslim elites, at just a scratch, reveal themselves as nothing better than Islamists.