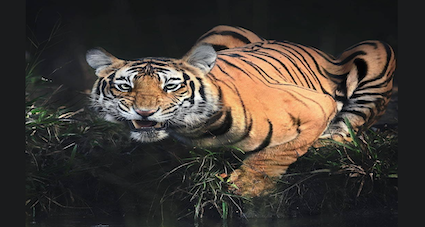 Two people have been killed and one devoured by a tigress and her cubs in the Corbett Tiger Reserve this month, triggering panic in the region.

The tigress was – eventually – captured by wildlife officials after the wild cat was tranquillized. “But the bigger fear is that her cubs are still at large,” said a guide.

The fear is that the cubs were with the tigress when she attacked people. Now, chances are high that they would have also tasted human flesh and blood.

The big cats also attacked two more people, injuring them seriously. In July alone, there have been four such attacks in the reserve, India’s biggest home for tigers.

A guide, who spoke on conditions of anonymity, said tigers attack because they know men run slower than deer. “We do not know what is triggering such attacks, maybe tigers are unable to kill deer because of rains. Maybe they are disturbed. This tigress and her cubs have been seen by many near Dhangeri gate.”

Local tour operators said the killings could have a serious impact on tourism when the park opens to tourists from November 15, 2022. “Obviously there will be fear,” said the guide.

It is also not immediately known how many cubs used to travel with the tigress. Some people, contacted by telephone, said there were four cubs while wildlife officials maintained that there were just two cubs.

All the attacks happened near a rivulet close to the Dhangeri gate, the main entry point for the forest. After two such attacks, the tigress and her cubs completely devoured one man, forest officials could only find portions of one arm of the victim. In the second case, the person’s body was found by wildlife officers from inside the forest with grievous wounds on his chest and belly.

The attack where portions of the person’s body were found by wildlife officials happened on July 16, 2022. Wildlife officials said Mohammed Anas and Asraful Ahmad – who belong to Jihal village of Amroha district in Uttar Pradesh – were headed on a motorbike for their home in Ramnagar, the town closest to the tiger reserve, from Almora when the tigress attacked them. The incident happened around 8.30 pm.

According to the information reaching Delhi, the tigress killed Asraful on the spot, a panicky Anas ran to the Mohan forest outpost and took shelter in the guard room. Virender Pandey, forest beat officer said an immediate search was launched but turned futile. The next morning, a bigger team of forest officers and rangers started their search for Asraful’s body amidst torrential rains.

Shekhar Tiwari, forest officer of Ramnagar range, said: “All we could recover was a part of Asraful’s arm. We are trying our best to locate portions of the body.

Wildlife officials have sealed off the area between Garjia – a holy spot close to the forest – and Dhangeri, banning movement of people. Schools in the area have been closed by the local administration, additional forest guards have been requisitioned to track the maneater tigress.

Renu Bhandari, a woman from a village close to Dhangeri, said people were living in total panic. Bhandari told a YouTube channel in Ramnagar that time and again, tigers were killing cattle. “And now they have started killing people. The forest guards need to do something.” (see video from One Mile At A Time).

Sub Divisional Magistrate (SDM) Gaurav Chatwal said special cages have been placed in the area, night patrolling has increased. Three JCB (heavy earth movers) machines have been put into operation, and are being used to clear a way through the dense forest. “The tigress has been taken away from the forest, we are trying to look for the cubs,” Chandrashekhar Joshi, divisional forest officer, Ramnagar.

The first killing of a man by a tiger this year happened around the start of 2022. The person, whom doctors described as physically challenged, was severely mauled by the wild cat and died from excessive bleeding. The Corbett officials – justifiably – refused to call it a case of a maneater.

That time, the villagers did not launch any agitation against forest guards, nor were there any demands to declare the tiger a maneater. But this time, many villagers were quoted by local news channels as saying they want wildlife officials to probe reasons behind such increased attacks.

“There have been many occasions when tigers have charged at our vehicles inside the forest. These incidents largely go unreported. Sometimes, drivers are egged on by tourists to go close to the wild cats,” said one of the drivers.

Those living in the vicinity of Dhangeri say animal-human conflict is routine in the area but the situation is different when it comes to a tiger.

Tiger attacks have always haunted officials of the tiger reserve, and those who live in the vicinity of the forest. Wildlife officials told this reporter that only on rare occasions, the wild cats turn into a maneater. The wild cats – both tigers and leopards – attack out of panic.

“Four attacks and two deaths in a month is a serious issue. And there was one death earlier. We are on very, very high alert,” said Ramnagar divisional forest officer Joshi. Corbett National Park, home to over 250 tigers, attracts thousands of tourists every year. Tigers have increased in the reserve forest, and so has the human population in the villages near the forest.

Raghu Chundawat, India’s top tiger expert, said that it would be difficult to react to the spate of incidents. “Tigers normally do not chase bikers unless there has been a previous spat.”

Bikers routinely travel through tiger habitats, which are cut by roads and railways, fields, factories and mines.

India is home to more than half of the world’s 3,900 tigers living in the wild. The World Wildlife Fund for Nature (WWF) says since the beginning of the 20th century, over 95 percent of the world tiger population has been lost.

Anjana Gosain, a top tiger expert and CEO of Tiger Trust that was started by Kailash Sankhala, the first director of Project Tiger, said she was not at all surprised at the number of attacks. “The tiger is a sensitive animal. But the tiger is disturbed, the tiger is panicked, the tiger is upset because there is too much human activity in the tiger’s den.”

Gosain said there are over 400 properties all around Corbett park. And bulk of these hotels have scant respect for wildlife. “The tiger’s hunting is disturbed. It kills a 70-80 kg sambar deer or cheetal deer and eats 20-30 kg of meat in total peace. But that is not happening anymore because of increased human activity inside the forest, and in the vicinity of the forest.”

“Think about it, the tiger range within India is diminishing. The tiger needs 20-25 square miles for movement. And that space is shrinking.”