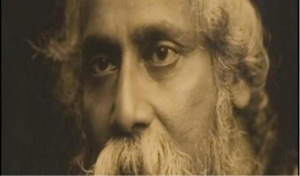 I bemoan that our intellectuals, historians, journalists, educated young or old have let former Supreme Court judge, Justice Markandey Katju’s description of Rabindranath Tagore as a “British stooge” pass without a murmur. What hope there is left for our lost people? If our blood doesn’t boil, if we don’t react to this assault on our dignity, the national consciousness is dead and buried. Hang your head in shame, sleep on a bed of fire, drink the poison of your impotency if you let it pass.

Katju this is the man you have chosen to attack in your piece.

Rabindranath Tagore’s family was a prominent beneficiary of the British rule.  His grandfather socialized with Queen Victoria. His elder brother was the first Indian Civil Services (ICS) administrator.

Tagore was born in 1861, four years after the Great Indian Mutiny. Bengal was most exposed to the West and it was natural for Tagore to find European manners acceptable in his teen years. But by the time, he was 20, he sought to distance himself from his businessman grandfather, a crucial intermediary in the opium trade.

Between 1891-1901, he “retired” to Bengali countryside and became convinced that India’s revival could only start from its villages. In 1901, he founded Shantiniketan.  One of his earliest pronouncements against the West and its machinations, read: “Scientific rather than human, it was overrunning the whole world, like prolific weed…it is carnivorous and cannibalistic in its tendencies, it feeds upon the resources of other people and tries to swallow their whole future.”

“The century’s sun has set in blooded clouds/There rings in the carnival of violence/from weapon to weapon, the mad music of death.”

So enamoured was Tagore with the Swadishi Movement and hurt by Lord Curzon’s partition of Bengal in 1905, that he composed two songs that subsequently became the national anthems of India and Bangladesh.

On his way to Japan in 1916, Tagore had lamented that “when the English went to snatch away Hong Kong from China, it was they who “beat” China.” Recalling the razing and looting of Summer Palace of China, Tagore lamented “how the European imperialists had razed it to dust…how they had torn to pieces, burned, devastated and looted the age-old art objects.”

On the tussle between England and Ireland, Tagore remarked that “England is a python which refuses to disgorge the living creature which struggles to live its separate life.”

In 1924, already having received the Nobel Prize for literature in 1913, Tagore lectured thus in Beijing:

“The West is becoming demoralized through being the exploiter, through tasting of the fruits of exploitation…Phyiscal power is not the strongest in the end.”

On that same tour, he agreed that the young people were attracted to the West. “But this traffic of ideas was one way, leading to the gambling den of commerce and politics, to the furious competition of suicide in the area of military lunacy…In order to save us from the anarchy of weak thought we must stand up today and judge the West…We must find our voice to be able to say to the West: you may force your things into our homes, you may obstruct our prospects of life—but we judge you.”

When Japan showed its imperialistic colours in the first half of the 20th century,  Tagore was so upset that he declared he would never visit Japan again.

In 1935, Tagore’s old friend, Yoneijiro Naguchi wrote to ask him to endorse Japan’s war in China for a better Asia.  Tagore replied that such an Asia could “only be raised on a tower of skulls…it is true that there are no better standards prevalent anywhere else and the so-called civilized peoples of the West are proving equally barbarous.”

Addressing a dinner-party audience in New York in 1930 that included Franklin D. Roosevelt, Tagore said thus: “the age (does) belongs to the West and humanity must be grateful to you for your science…but you have exploited those who are helpless and humiliated those who are unfortunate with this gift.”

Tagore died in 1941 when the Second World War was at its peak. During his life, he remained an advocate of pan-Asianism and wanted humanity to rise above the nation-state concept. He was a rare visionary who had prophesized thus in his lifetime: “The nations which now own the world’s resources fear the rise of China and wish to postpone the day of that rise.”

To revile a giant like Tagore, Katju could only be a “stooge” of his own depravity. Don’t let him get away with it.