Keep these questions in your quiver against suspect media in Modi 2.0 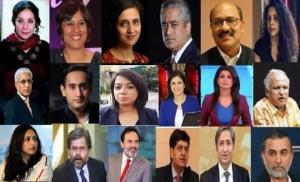 As 2019 Lok Sabha polls unroll, I want you to look at the faces in the image above. Ask them a few simple questions on social media. Most likely they won’t reply. But you would know not to trust them. It’s important as Prime Minister Narendra Modi gets set for his second term. It’s important they lose respect in your eyes for they have set a matrix and don’t allow readers to come out of it. Your ignorance is their strength. Once they lose their powers over you, they would be of no use to those they look up to. A nation has more to worry about enemies within than enemies without. So here are a few questions I want you to ask them:

On Secularism: How come you give wide coverage to “threat to secularism” under Modi government but have no qualms when a Mayawati asks for all Muslim votes in public rally. Isn’t it a threat to secularism? Don’t you have a question for award-wapsi gang and letter signatories who emerge from nowhere to nail Modi on that count? Have you questioned their silence on Mayawati?

On Freedom of Speech: You cry yourself hoarse that because of draconian sedition laws, “freedom of speech” is shackled. When a biopic on Prime Minister is made and dragged to courts, you don’t think it’s a violation of “freedom of speech.” How a Modi biopic any different from “Udta Punjab” on the eve of Punjab assembly elections? You condemn BJP on sedition laws but didn’t utter a word when Congress booked 6,000 under sedition law in Tamil Nadu.

On Kashmir: Your Jammu and Kashmir is centred only around two and a half districts of the state. The progress of Jammu and Ladakh escapes you. That every house in J & K today is electrified; every house has a toilet. Exports and agriculture are on the upswing. Tourism has grown. Amarnath Yatra travellers have doubled. So have the ones to Vaishno Devi pilgrimage. Educational institutions have sprung up manifold. J & K has become so good in sports its football team is beating fancied Bengal clubs and entering I-League.

As you question BJP on human rights violation in Kashmir, have you praised the Centre for releasing 9,000 stone-pelters and not levy a single charge against them? Did you acknowledge that this is the same BJP government which announced a unilateral ceasefire during Ramadan in the Valley? Or the purse they freed form J & K floods? Did you stop and question Congress which condemns the armed forces for its “excesses” under Armed Forces Special Powers Act (AFSPA) even though not one case has been reported against them in the UN Peacekeeping Forces where they constitute a majority?

On Article 370 and 35A: Everyday you find lectures in newspapers about the constitutional inviolability of these two draconian laws which allows Jammu & Kashmir to have their own constitution and disallow any outsider to settle in the state. They make you so weary that you don’t stop to ask how would J & K grow if IIM lecturers from other parts of India can’t reside in the state. How would investment come when businessmen are not sure of how would they be treated. Whether in the name of Kashmiriyat, all that the people in the Valley have seen is separatists and political dynasts operate a fiefdom and keep Kashmir under their thumbs. Have they opposed Pakistan for illegally occupying a big chunk of Kashmir. Have they questioned how could Pakistan give away Gilgit-Baltistan to China? When people applaud NIA raids on bigwigs of the state, doesn’t it deserve a reflection if people indeed don’t want these separatists and dynasts to represent them?

On Congress: Why our newspapers don’t take up expose’ on Rahul Gandhi and his clandestine deals with evidence as OpIndia recently did? Why they don’t question him when he runs away to Wayanad in Kerala in the name of promoting North-South unity. What unity for it was Congress which split open Andhra Pradesh into two states, Telangana being carved out of AP’s womb. Did you question him on AP division?

When Congress talks about “Nyay (justice)”, what “nyay” have Muslim women got on the matter of triple talaq? The riot victims of 1984; the fake loan-waiving promise by recent Congress governments in Chattisgarh, MP and Rajasthan; fake promise of money to every youth; Bhopal gas victims; ISRO scientists being jailed; fake cases and jails on Samjauhta Express; the dead body of their own stalwart Narasimha Rao not being allowed inside Congress headquarters; the “nyay” denied to Ambedkar, Patel and Subhas Chandra Bose in terms of stature in history books? What “nyay” nonsense thus, did you question?

In 2004 Congress promised full electricity, loan-waivers to farmers; same in 2009, same in 2014. Have media goons ever questioned them on their track records?

LYNCHINGS AGAINST DALITS AND MUSLIMS: As per National Crime Records Bureau (NCRB) data, between 2009-2013, crimes against Dalits rose by 17.3%. This meant one crime every 15 minutes for five years running. Crime against women rose to 27 percent. Under NDA, it was 3% in 2015. The latest NCRB data reports under 5% growth in crimes against women and SC/STs.

WHY CONGRESS, EVEN BJP AND ALLIES ARE DYNASTS: Whenever a charge of dynasty is made against Gandhis, the Lutyens Media quickly gets the word around that BJP and its allies are dynasts too. They won’t point out the difference: Congress controls party within family; BJP/Allies have lineage which seeks approval from voters. Congress keeps reins within family by keeping yes men around. BJP/Allies progenies are dependent on voters’ approval.

AMIT SHAH IS BEING GROOMED TO BE A MINISTER: BJP president Amit Shah has been given a Lok Sabha ticket. Opponents say it’s to fast track his entry into the Union Cabinet. But did BJP really need to take down that road? When Amit Shah has been a Rajya Sabha Member of Parliament for a year and a half, he could have been made a minister in a matter of seconds. He didn’t need to take the Lok Sabha route.

Indeed, for every question which sick media asks of Modi and his government, there are ten questions which logically emerge against the Congress and its opponents. But they are spared the rod. This is the face of India’s unfair and biased media. Keep a tab on them. There would be more poison spewed in Modi 2.0. As long as you could direct logical questions to them, you would keep them pinned in the mud of their own lies and deceit. That’s all what is needed to break India free of this eco-system.