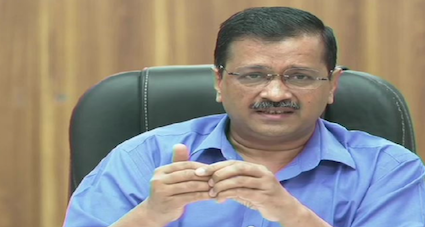 Aam Aadmi Party, led by that master of flip-flop Arvind Kejriwal, had declared not long ago that they had put complete ban on the use of coal in Delhi. However, these days he is heard saying that the Capital is in grip of a power crisis due to coal shortage at power plants.

Kejriwal wrote to Prime Minister Narendra Modi after reports that over half of 135 coal-fired utilities, which supply more than half of India’s electricity, have fuel stocks to last just under three days.

However, the same Delhi government had mentioned that Delhi is the first modular state which has no coal-based power plants.

The Union Power Minister R K Singh slammed the Aam Aadmi Party, mentioning that there is an adequate supply of coal in the country which will last for four and a half days and there is no need to mislead the public by threatening load shedding and blackouts in the near future.

In a press conference, held to address the “coal-crisis,” Singh stated “We have an average coal reserve (at power stations) that can last for more than four days. The stock is replenished every day,” adding that he was in touch with Union Minister of Coal and Mines, Pralhad Joshi.

He also assured that Delhi is “being supplied the required amount of electricity and it will continue.”

Additionally, the Power Ministry has also listed four reasons for the depletion of coal stocks.

“There are four reasons for the depletion of coal stocks at the power plant end unprecedented increase in demand for electricity due to the revival of the economy; (a) heavy rains in coal mine areas during September 2021 thereby adversely affecting the coal production as well as despatch of coal from mines; (b and c) increase in prices of imported coal to unprecedented high level leading to a substantial reduction in power generation from imported coal-based power plants leading to more dependence on domestic coal; (c) non-building of adequate coal stocks before the onset of Monsoon,” read the release.

The release by the Power Ministry further revealed that a surge in the revival of the economy after the second wave of Covid-19 led to an unprecedented increase in demand and consumption of electricity.

“The daily consumption of electricity has crossed beyond 4 billion units per day and 65 per cent to 70 per cent of the demand is being met by coal-fired power generation only, thereby increasing dependence on coal,” it said.

Additionally, the ministry added that an inter-ministerial sub-group led by the Ministry of Coal has been monitoring the coal stock situation twice a week.

Import of coal has decreased compared to 2019-20 because of import substitution and rising prices of imported coal, which has been compensated by domestic coal for power generation, in turn increasing the demand for domestic coal further.