Kolkata: A city where we idiots beam in front of our neo-Colonial symbols of slavery 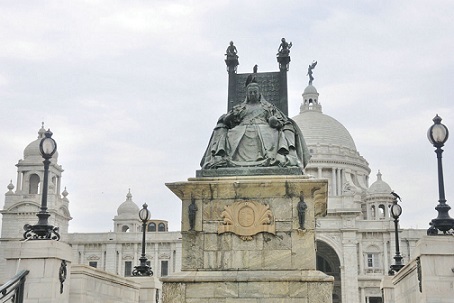 (Kolkata: This one is third on the Neo-Colonialism in India series. The first one was on Delhi and the second on Mumbai. God know who is on Veeresh Malik’s radar next.)

As we meander from the neo-Colonial baggage of nepotism-laced Clubs in Delhi and Mumbai towards Kolkata, a moment set aside to drop in at the Mother or all Symbols of Slavery being propagated to free India as “heritage”: The Victoria Memorial in Calcutta. A tribute to a cruel monarch who took on and spat out poor old Abdul, lying forgotten in a grave somewhere near Agra, possibly with progeny derived therein scattered around working as parking attendants at Fatehpur Sikri.

The big fiction about the Victoria Memorial is that it was built on a generous voluntary basis as tribute and respect for Her Majesty La-di-Dah Lord of the Empire and the rest of the story invented and then translated into every language written and spoken where the sun never set. This is about as true as the fiction that the Taj Mahal was a monument to love also built on voluntary basis by 22,000 craftsmen in Agra. At the Taj in Agra, thankfully, we do not have statues glorifying our slavers and those who robbed us. At the Victoria Memorial, however, apart from the Horny Dowager Queen parked in all her regal cruelty right as you enter the premises, we also have Clive, Hastings, Curzon and a variety of other punters greeting us from above as though to remind us – hello, in our own country, we were disgraced as robbers and worse, but here, you slaves, we still keep a beady eye out on you.

Paid for by us, the taxpayers, always remember that. Even today.

It took me years of Right to Information and Public Grievance applications to sort out the whole reality of celebrating Independence and Republic Day at the Victoria Memorial. In 2015 and onwards, if you please, as I marvelled at the way we in free India continued to genuflect in front of this symbol of our abject surrender, sitting on a throne placed higher than the Indian flag, in Kolkata, India.

As I have written before at many points across the internet – there is not one country within the ambit of the Indian Ocean economies, which includes Africa, Asia and the Antipodes, which continues to prostrate itself in front of its slave-masters of the Colonial and Mongol/Mughal eras as does Independent India. India is unique in this context.

And within this madness of not accepting the Truth, lie our Colonial era Clubs, much in the news lately on issues of nepotism – and no single city in India has more of them than does Kolkata.

Despite decades of Left-of-Centre but Actually-Quite-Right Governance by the Jyoti Basu School of Communism. Quite ably supported by the business community in Kolkata, centred around, now mostly Alipore, and previously Burra-Bazaar, so well brought out as the Utpal Dutt played Marwari villain Maganlal Meghraj in Satyajit Ray’s “Joy Baba Felunath”, “Joto Kando Kathmandute” and “Golapi Mukta Rahasya”.

The British and the Marwari communities in Calcutta and now Kolkata pretty much spell out the movement of power from the Moghuls till today. That the left-nipple posing Last of the Oudh Rulers Wajid Ali Khan was rapidly dispatched to last out his final opium-laced days in Metia Bruz is a fact well documented. That the Ghosts of the British still hang around in the corridors of the Colonial Clubs of Kolkata is not so well documented. I’m not aware of the flow of Opium to China any longer, though.

There are so many of these Clubs in Kolkata, occupying vast acreages in one of the most congested cities in the world, behind high walls hidden from public view, that no one particular offender can be named. Within the city that emerged from the villages of Sutanuti, Gobindapur and Kalikata, you have the Tollygunge Club (200+ years old), Calcutta Club (1907), Saturday Club (1875), Royal Calcutta Golf Club (1829), Calcutta Cricket and Football Club (1792), Bengal Club (1827), Dalhousie Institute (1859) and more. For members only. And membership is by descent. Inherited, whether you deserve it or not, I’m aware of some of the champions I’ve met in these clubs.

There are a few commonalities across all these clubs (and there are many more from the British era, incidentally, in and around Kolkata.)

1) They are all built on taxpayer funded real estate and continue to squat there. “Gifted” to the British.

2) Membership has become largely hereditary over the decades. So has a drop in IQ levels, it would seem.

3) In the hottest and most humid of weathers, people wear three-piece suits, which is ridiculous.

The first Railway factory had to be sited at Jamalpur, not Calcutta, because the whole lot of white guys was out clubbing with whichever women happened to be around. Only white males allowed, remember, no restriction on Ladies of Colour. And that’s what these edifices glorifying our slavery remind me most of, as people twirl around, pretending to be our Very neo-Colonial,

What’s amazing is that in a city said to be famous for Communism, the respect and adulation for the British slavers that entered India kind courtesy of the Hooghly River, gateway to the Ganges and beyond, not only exists to this day but continues to grow and multiply. Like the carbon copies type Colonial Club members, smudged and mostly not making sense anymore – but at our taxpayer expense.

When does this stop, when do these colonial hangovers become District Sports Centers? The Brits left in 1947.