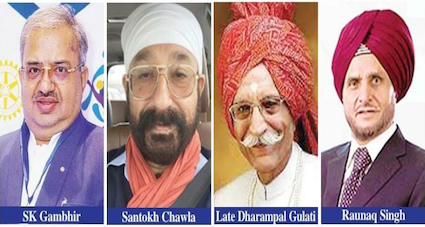 As the country is gearing up for the 75th independence day and the mood is upbeat everywhere because the occasion is so momentous. While we must celebrate the special occasion of our dear country, can we ignore the achievements of Punjabi refugees who had to leave their homes?

It is not about discussing the stunning stories of the likes of only Brij Mohan Lal Munjal ( Hero group), Raunaq Singh (Apollo Tyres), Mahashay Dharmpal Gulati (MDH Masale), Bhai Mohan Singh ( Ranbaxy Pharma) and others. Of course, they were the role models for one and all. They built gigantic empires during their life times. We must reflect as to why so many Punjabi refugees have created a niche for themselves post 1947.

What were the secret of their success? Says a Delhi based author and tax consultant, Mr. Surinder Kumar Gambhir,  “ I feel that Punjabi refugees have made success in business as they were brave people. They knew that getting a job is not easy. So, they tried their hand in business. And they got success. Moreover, they were not shy of doing business.” Gambhir ‘s father came to India from Multan.

And talking about Raunaq Singh, he was born to a middle class family in Daska which is now a part of Pakistan. During his young days; Raunaq along with his friends in Lahore used to sell second hand steel pipes on bicycles to their clients, at the price of new ones and that too after receiving an advance.

Later, he joined a steel pipe merchant as a salesman in Lahore at a salary of Rs. 8/month. Doing this job; his entrepreneurial skills & the basics of business got the polishing it needed.

After India became independent in 1947; Raunaq Singh too moved to India as a refugee. Initially; he used to camp in a small one room apartment in Gole Market, Delhi along with 13 other roommates. He again started afresh by working in a small spice shop in the neighborhood called Munilal Bajaj & Co and earned an income of 1 paisa/day. Although it was nothing as compared to what he was earning earlier but because he had to run a household, he took whatever he got. And now the group he had established is the world’s 7th biggest tyre manufacturer with annual consolidated revenues worth billions of dollors. Post his demise, his son Onkar Singh Kanwar is the boss. He was just 8 years old in 1947.

In Delhi, Sewa Singh Namdhari was very active with RSS and remain head of Delhi unit in 60s. He worked with the likes of Bala Saheb Deoras, Kedar Nath Sahni, Vijay Kumar Malhotra and others He was also a very active member of Cow Protection Movement. For a while, he was also heading the Vishwa Hindu Parishad, Delhi chapter. Apart from being a businessman, he used to idolize Netaji Subhas Chandra Bose. Santokh Singh Chawla, Namdhari’s youngest son, says that till the last days of his life, his father, who is the grand patriarch of the Namdhari Sikh community of India and Thailand, asks his grand and great-grand children to adopt the ideals of Netaji in their lives. Santokh Chawla is a pioneer of Water Sports parks in India and abroad.

“That some castes among Punjabis had a long history of doing business only.  KHOKHRAINS are a caste group of Punjabi Khatris, comprising Kohlis (our erstwhile Prime Minister and his wife Gursharan are Kohlis), Sahnis or Sawhneys, Chaddhas, Anands, Sabharwals, and, perhaps, some other sub-sects. They prefer to make matrimonial alliances among themselves. Nobody knew as to how the word Khokhrain came from.  Though some says that centuries ago when the Aryans were moving down, and since Alexander’s and Porus’ time, certain sects from the principality of Khokhar, somewhere between Baluchistan and Afghanistan, also moved down. Their descendants were called Khokhrains. In the Indian side, Porus ruled the region that fell between the rivers Jhelum and the Chenab, also called Chaj. They were noted for having defeated and killed Mohammed Ghori, to avenge the murder of Prithvi Raj Chauhan, who was a striking figure in Indian history during the latter part of the 12th century.

Even business is in the blood of Namdhari community.  Naturally, they too had to leave their homes in Pakistan due to gory  partition. When they moved to India, they started business. You would find doing small to doing big time business from Delhi to Hyderabad and from Mumbai to Banaras. According to Santokh Chawla, “ Namdharis know how to earn money thick and fast. The best of them is don’t spend much. They are very frugal people. They cannot do a job. That is not in their grains.”

And  if we are discussing the grit and success of refugees of 1947, we have to talk about Mahashay Dharampal Gulati. He became  synonymous with his brand, Mahashian Di Hatti or MDH as it is popularly known. He even made regular appearances on TV advertisements for his spice empire, always playing the endearing grandfather. A devout Arya Samaji, he passed away couple of years ago. While MDH is now a household name in India, Gulati’s is a ‘rags-to-riches’ story that began in what is today Pakistan.

Born in Pakistan’s Sialkot, Gulati had been a businessman for as long as he can remember. After having dropped out of school in Class 5, Gulati first ventured into the business of mirrors, soaps and carpentry, which was then expanded to include cloth, hardware, and even rice. All of these ventures, however, failed and Gulati was left with no choice but to join his father’s small business of spices built under the name Mahashian Di Hatti, then also known as Deggi Mirch Wale.

Once narrating his story to this writer, he said that he moved to Delhi after Partition, a month after Independence, with just Rs 1,500 in his pocket. He bought a tonga with Rs 650 and would charge two annas for a ride from the New Delhi railway station to nearby areas.  Later, he concentrated on his family business of Masale and got big leap.

Isn’t this all a wonderful tale of inspiration and fortitude?

Who was this lady in Cyrus Mistry’s funeral?

Sheikh Hasina’s visit: Who are her two friends she would miss on this trip?