Kumbh, Rallies, Central Vista, Infra, Pricing etc: Answers to all you wanted to ask the Modi govt. and couldn’t 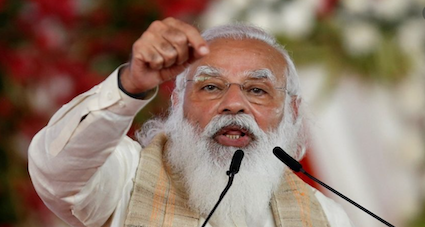 Untrue news stories, unverified information and conspiracy theories, and cherry-picking facts for their motive amid the second wave of the deadly Coronavirus have made the Lutyens Media discredited enough to gain public trust anymore.

At every step of the covid saga over the past year, major sections of the media have abdicated their responsibility. Fake News has been as damaging as fake narratives.

We at NewsBred believe that readers must know what exactly is going on that your newspaper or news channel doesn’t bother to tell you. We’ve listed down the major narrative going around and the counter to it (a piece in Gulf News has been a help in the endeavour).

Narrative: The Government of India hasn’t done anything to cover up the shortage of health infrastructure.

The government and DRDO together are using the PM CARES Fund to set up more than 1,200 oxygen plants.

The free food and ration scheme, covering 800 million Indians, has been extended for another three months.

A new anti-COVID oral drug developed by DRDO — 2-deoxy-D-glucose (2-DG) has just been approved. It has proved very efficacious in fighting the infection.

Truth: On March 17, 2021, when India had 30,000 cases per day, Prime Minister Modi himself held a detailed meeting with all Chief Ministers where he explicitly advised the state government to take all necessary actions before it gets too late. However, states took action when the second wave had already spread itself.

Narrative: States were not warned by the government about the second wave

Truth: Despite issuing multiple advisories many of the state administrations did go lax, especially the states where the second wave seems to have originated including Maharashtra, Chhattisgarh, Punjab, Tamil Nadu.

Apart from that, Chief ministers like Mamata Banerjee, Bhupesh Baghel continue to miss the covid review meeting by PM Modi despite several reminders.

Narrative: India has the highest number of cases in the world!

Truth: The basic idea of this comparison is at fault as India alone has more population than entire Europe and North America combined. So in absolute numbers, India will be higher. In terms of death per million population, India stands at 110th place in the world.

Truth: The second wave took off from Maharashtra, Kerala, Chhattisgarh, and Punjab. The latest data suggest that Punjab, the epi-center of farmer protest was the origin of the second wave. There were no elections in Maharashtra, Chhattisgarh, Delhi, or Punjab where the numbers started rising dramatically by the end of March. The rallies in Kerala were done majorly by Rahul Gandhi and left leaders.

In January and February, considering the drastically low cases, a conditional go-ahead, on the dates proposed, was given for Kumbh. However, when cases increased, the government intervened itself and ended it before its due date.

Narrative: Why did India export vaccines denying its people?

Truth: Indians have been given 17 crores (170 million) vaccination while it has exported just 6.6 crores (60 million) that is 1/3rd of the total production. Beyond that, Serum Institute of India (SII) is just a manufacturer. It doesn’t own Covishield vaccines and is legally bound to supply manufactured vaccines, time-bound, to countries with which AstraZeneca has a contract in place.

Narrative: Prices of vaccination are different for state and Centre

Truth: When the vaccines were in the trials, the government of India signed the contract for a limited quota of vaccines at the price of Rs 150/- Beyond that, the Centre will procure 50% out of the total vaccine that will be procured, which will be given to states at free of cost.

Also, Prices are quoted by private companies and state government and private hospitals are free to negotiate the price with the firm.

Narrative: No transparency in the covid deaths by the Government of India.

Truth: Firstly, there is no Government of India data. All of the data received by the government comes from the state government. Whatever they report is collated and shown.

Truth: Spending money on Central vista might seem to be a criminal wastage for politicians living in their luxury bungalows. But it is important to understand that infrastructure investment sparks a virtuous cycle of economic recovery — jobs for semi-skilled and unskilled labor, demand generation for the entire manufacturing and core sector, and a surge in allied services and hospitality sector.

After a year of lockdown and depressed economic activity, the government of India is rightly spending money on productive economic activity, generating jobs, renewing the urban landscape, spurring allied sectors, and ensuring that those at the bottom of the pyramid are not further stressed by shutting down the only sector that can gainfully employ them.

Narrative: India should have a New Zealand’s Prime Minister

Truth: For people who are saying this, one should note that just Bengaluru’s population is more than New Zealand. If North America and Europe were combined, they would still have fewer people than India. Talking about the numbers , they have four times more covid cases and six times more covid death.