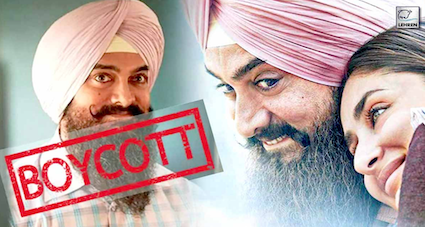 Honour is a very oriental socio-cultural concept, that the Europeans and their historians have always found difficult to accept and understand, going back to Thucydides’ history of the Peloponnesian War published around 400 BCE. Western Judeo-Christian traditions, especially of the last few centuries which were all about conquer and decimate others, will not understand this – just as robbers will not understand what it means to snatch a religious deity and melt it down to gold.

The main argument of this very short article is that the “BOYCOTT LAL SINGH CHADDHA” movement is no longer something that can be placed in a binary of a Hindu envelope vs the other Indians. Today India, after centuries, is reaching a level of affluence bottom up where honour is replacing the need to ensure the next three meals.

The next three meals, as has been explained to me very often, can easily be sought and provided at the nearest House of Religion. Very often shelter too, if in need, and also guidance, fresh laundered clothes, and a way to reach home. With self-respect intact.

It starts from there. The few clips available, the attitude from the actors, and most of all the refusal to even engage with the rest of India in a “take it or leave it” approach is what causes this response based on honour and self-respect – BOYCOTT LAL SINGH CHADDHA.

Sarvatra Izzat-o-Iqbal is the Motto for the Regiment of Artillery. Indian Army.

Shatrujeet is the Motto for the Para Regiment, Indian Army.

On the other hand, what we are shown by this tapori from Pali Hill in Bombay, and his cohorts, is – from the songs available and the trailer – a maudlin mix of an assumption of guilt by a soldier which flows contrary to the prestige, status, reputation, and recognition within the cultural driver of honour that our Indian Armed Forces stand for.

Honour and self-respect is part of India’s strategy to emerge from two centuries of humiliation that an assortment of invaders subjected us to. Regardless of religion, nobody should be allowed to mess with this process, least of all a movie sponsored by India’s enemies.