Look at this to get the Big Picture 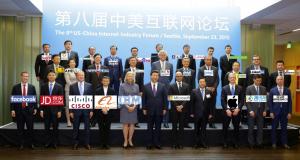 Indian Prime Minister Narendra Modi is all over the Indian newspapers with his visit to Facebook headquarters and being courted by world’s top business honchos. But what was their response to Chinese president Xi Jinping’s almost simultaneous visit to the US? This picture with the article alone will give you the big picture.

Here you have this picture. The big, big picture. Chinese President Xi Jinping is in the middle in this group photo. Around him are world’s biggest business leaders. The occasion was his visit to Microsoft’s campus in Washington last week.

Any official group picture in China often deserves a second look. The code of hierarchy is strictly followed. The pecking order is made clear to the world. So, this picture is being deconstructed for everyone’s benefit.

Xi is flanked by IBM’s Ginni Rometty (left) and Microsoft’s Satya Nadella (right). These two companies are the biggest investors in China in terms of US technology companies.  However, just to make the matter a bit clearer for IBM and Microsoft and their internet juggernaut, we also have Lu Wei (fourth from right) in the front row. Lu is China’s internet czar. His great firewall of China—a take on Great Wall of China!– monitors dissent and censors thousands of sites. No other China’s official has merited a place in the front row.

Apple hasn’t invested as big in China as IBM or Microsoft has. But China is its biggest market and hence CEO Tim Cook you have in the front row, third from right. At the farthest right you have Jeff Bezos, the founder of Amazon.

Pony Ma Huateng (second from right) is the founder and chairman of China’s social and gaming giant Tencent. It operates the hugely popular WeChat and QQ mobile messaging platforms.

Facebook is not available in Mainland China for years. It sure pinches its co-founder Mark Zuckerberg hard. Besides having an ethnic Chinese wife by his side, Zuckerberg has also learnt to speak Mandarin. You have him here at the far left of the front row, wearing a bold red tie—a symbolic gesture for the Communist Party heads of China.

Between Zuckerberg and Xi you have two of China’s biggest e-commerce giants. Second from left is JD.com’s Liu Qiangdong. Fourth from left is Jack Ma Yun, the head of Alibaba which runs the staggeringly successful Taobao and Tmail services. Ma, a former English teacher from Hangzhou, is the only one in the picture not wearing a tie—a testament to his assured status in Chinese hierarchy.

There weas a time when Lenovo was perceived a major success story, having acquired IBM’s PC business in China a decade ago. Today its CEO Yang Yuanqing merits a spot only in the second row (third from left), a reflection of Lenovo’s stock in China. You could measure Yang’s desperation, again, by the red tie he sports.