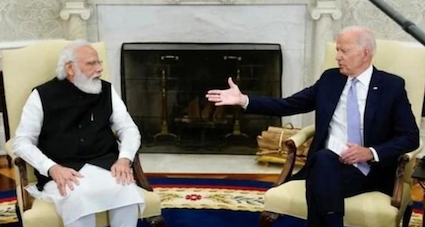 The Japanese have a citrus dessert called Yuzu Pie. Very topical, because it is also a form of serving humble pie along with the more famous Japanese tea ceremony.

“Despite New Delhi’s reluctance to bail out on Russia, Blinken suggested the US was now in a position to weaken the ties, saying for India, Moscow “was out of necessity a partner of choice when we were not in a position to be a partner.”

Asians have long memories. And we don’t think in binaries. The Umrikans tend to forget that.

Yokosuka in Japan, not too far from Tokyo, at the entry to Yokohama Bay, is the Headquarters of the United States of America’s Seventh Fleet. Yes, the same one that hopped over to the Bay of Bengal during Bangladesh 1971, and then quietly steamed right back on being shown a Russian bear standing over the horizon.

I was a raw young cadet on the Indian flag cargo ship SATYA KAMAL, still in my teens, autumn 1975, holding an independent watch as we literally struggled into the US Navy’s Yokosuka Dry Docks after a terrible storm in the South China Sea, in the course of which we had touched something which left a bit of a dent on our ship’s bottom.

The workers at the dry docks were Japanese, many of them still had memories of Hiroshima and Nagasaki as well as the Indian National Army, and all of them would light up when they heard the names Subhas Chandra Bose as well as Indira Gandhi. Pointing at the American Naval ships sharing space in the same port, they would laugh in that typical self-effacing hand-waving in front of mouth Japanese way, and say something to the effect that “she Indilla Gandhi velly stlong woman, she send the Amellican Navy back to Yokosuka in 1971 and 1972”.

Which was a fact – by early December 1971, not just the Task Force 74 of the US Navy 7th Fleet, which included the Aircraft Carrier ENTERPRISE and about 50 support ships, but also the British Navy with their Aircraft Carrier EAGLE and their support ships, all well fuelled by their Arab friends of that era, had moved into the Indian Ocean and Bay of Bengal on both sides of India.

By middle of December, however, the Russians had moved their 10th Operational Battle Group from Vladivostok, with nuclear armed support ships and more than anything else, six (or more) nuclear submarines into the Bay of Bengal. In submarines, the Russians have always been way way ahead of the Americans, and that is common knowledge at sea.

At the beginning of this essay I mentioned the SATYA KAMAL being bumped underneath. A few years later, the even bigger SATYA KAILASH suffered a massive gash when something banged it from underneath, again, in Japanese waters, Submarines often use the cover of large ships above them. We usually figure it out because our ships start behaving weirdly, steering erratically, when something is below them – like a buffalo which has, for example, a goat hiding below for whatever reason—makes the buffalo nervous. Cargo ships are similar. Huge, lumbering through water, minding their own business. Till something troubles them.

Cut to 2022. Good to see the Americans meeting the Indians on equal ground and terms in Japan. The Japanese have a citrus dessert called Yuzu Pie. Very topical, because it is also a form of serving humble pie along with the more famous Japanese tea ceremony.

And the US 7th Fleet is still head-quartered at Yokosuka, near Tokyo, but this time around – it stays out of the Bay of Bengal. As for the Brits, their Aircraft Carrier is in a spot of bother, if you truly want to know.