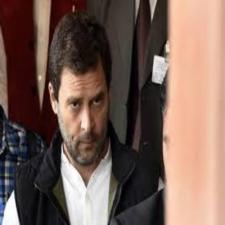 It’s without bitterness or rancour that I point out how the rotten media—both Indian and Western—keeps the “Dead Man Walking,” that is, Indian National Congress.

Vir Sanghvi, out from the edit pages of Hindustan Times for nearly a decade after the Radia Tapes leaks, is back strategically ahead of the 2019 Elections. On Friday, he warned BJP it has a “fight on its hands,” since “Rahul Gandhi has grown in confidence.” The first time Sanghvi’s political pen is unfrozen in a decade, it flows in obeisance. To take a hint from his own Brunch column, it’s in “rude taste.’

The last we saw of the child-boy Rahul on national screen was during the “hug debate” in Parliament last Friday. He had a dark visage, stung by the rebuke of generally mild Lok Sabha speaker Sumitra Mahajan, followed by BJP’s Anurag Thakur ripping open his Rafale lies in front of the nation.

Yet the same newspaper, only a couple of days before, was showcasing Shekhar Gupta almost celebrating the “Bofors moment” of BJP on Rafale. Now Shekhar isn’t shy on Congress or slinking type—remember how he made light of “pimping-for-Congress” remark of Arvind Kejriwal? So boldly Shekhar has gone ahead and penned another piece close on its heels—and you’ve guessed it right: “He (Rahul) has risen in stature as a pre-eminent leader of opposition.”

The next name which came almost instinctively to my mind was Barkha Dutt. Why? Because she links with Sanghvi as one who was badly stung by Radia Tapes leaks; and with Shekhar as a columnist in his venture to which once she briefly was a partner.

Barkha these days is usually found parked in Washington Post. She found Rahul Gandhi winner all over on “Hug Day” in front of the nation: “He won the headlines…he won the talking points.’

If Barkha is around can Sagarika Ghose be behind? She is used to being called a Gandhi loyalist. Her first sentence in Times of India on Rahul-hug is: “(it) has  stunned the government and left the Prime Minister looking thunderstruck.” Her husband, Rajdeep Sardesai, was far more nuanced but still couldn’t resist stating: “Pappu can hug saala.”

None of them realize that if there is one definitive moment which has sealed Rahul Gandhi’s fate in the eyes of the nation (as well in the eyes of other prospective allies) it is this “hug moment.” He looked kiddish, impulsive—first asking Modi to get up from his seat and when the wily Prime Minister didn’t oblige—throwing himself at him like a sack. He then allowed himself to be called back by PM; to be patted; and sent hurtling back to his seat. It was not a “winner” but a very “poor optics” beamed to millions. He became a laughing stock and sealed his fate with his own act.

And so have these court-jesters who masquerade as journalists. Remember the words most of them had to say about “Hugplomacy” of Modi: if you believed them or their Western ilks, Modi had made himself a laughing stock in front of world leaders.

Read BBC (“he has become a caricature of himself”); Washington Post (Modi an awkward hugger); Quartz (penchant for bear hugs) or news outlets closer home, unfailingly you’d find Modi plastered to the wall for offering warm hugs to fellow statesmen and leaders. But when Rahul Gandhi does so, all of these pen-pushers can’t stop gushing in admiration. The same Congress which ridiculed Modi and his hug on a youtube video, now has posters where Rahul’s hug has all but saved humanity. I mean how ludicrous could it get???