MEA’s presence in LAC border parleys is a payback to CCP in good, olden times 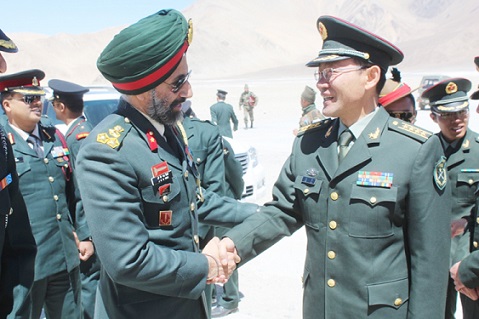 BPMs (Border Personnel Meetings) were a regular occurrence between Indian and Chinese military personnel on Line of Actual Control (LAC) before the stand-off started in Ladakh some months ago. These BPMs would normally lead to conviviality, some backslapping, casual questions about each other’s families and so on.

It was usually an easy interaction lasting some hours and dining together was a norm. From the Chinese side, the members of the Chinese Communist Party (CCP) were also present at these meetings. Perhaps to keep a close watch on the conduct of the Chinese officers and soldiers.

For most Indian military personnel, it was not very difficult to identify the CCP cadres despite them masquerading as People’s Liberation Army (PLA) troops. This was a facade the Indian side saw no reason to challenge in that atmosphere of casual contrived bonhomie.

Incidentally, BPMs are held alternatively at Chushul (on the Indian side) and Moldo (on the Chinese side). So, the Chinese are hosts for such meetings once and the next time the local Indian troops get to host the Chinese. Young and old, new Indian army officers, and jawans, posted to LAC, were told by those who had attended some BPMs earlier not to wear any costly items, be it gold chains or watches, at such meetings. To avoid losing them to some Chinese who may ask for them as gifts!

Of course, exchange between two sides, of some alcohol items, be it the classic Old Monk supplied to the Indian army and some whiskey brands was fairly commonplace. On an odd occasion, some standard winter wear would also change hands, all openly, and accounted for.

The atmosphere at 6th BPM, which started on Monday at Moldo is, however, a lot different from the past such meetings. A very peculiar aspect of this meeting is that Joint Secretary (East Asia) Naveen Shrivastava is also participating in it. He accompanied Corps Commander of 14 Corps Lt Gen Harinder Singh, and his would-be successor, Lt Gen PGK Menon, to the meeting.

Lt Gen Singh had taken over as 14 Corps Commander in October 2019 and he was Director General of Military Intelligence (DGMI) earlier. Changing him at this juncture has raised some eyebrows as continuity of leadership in crisis situations is often emphasised. It may also be indicative of some cooling down of tempers on both sides.

It may be recalled that during Kargil war, in 1999, there was some speculation at one time regarding removal of 15 Corps Commander Lt Gen Krishna Pal. However, the successful ouster of Pakistani intruders from Tiger Hill apparently led to saving the day for him.

The involvement of Ministry of External Affairs (MEA) in border parleys is a unique situation not seen earlier. It is not clear whether the Chinese have also sent some of their foreign ministry staff for this meeting. MEA official Shrivastava has been interacting regularly with his Chinese counterpart for several months. His participation in the parleys is being interpreted by some commentators as continuation of what started in Moscow.

Both India and China have declared publicly that they don’t want war, despite the stand-off in Ladakh. Russian President Vladimir Putin had called Narendra Modi on his birthday a couple of days ago. Modi had then conveyed to him that he could participate in the Shanghai Cooperation Organisation (SCO) meeting in Moscow scheduled for later this year.

India is to host Council of Heads of Government of SCO group next year. It seems now that a summit meeting between Modi and Xi Jinping may materialise during the Moscow SCO meeting. BRICS (Brazil, Russia, India, China and South Africa) is another group in which both India and China are partners. That also offers them a chance of engagement without raising of inconvenient questions for both of them.

By all available indications, disengagement of two sides from flashpoints may not happen any time soon. However, significant reduction of chances of any major clashes on the LAC is clear from these developments. Is this thaw dictated by the XI Jinping as he faces a CCP meeting scheduled for October?