Modi attacks Mamata but look at newspapers you trust 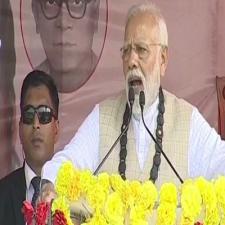 I am presuming you to have missed the ferocity of Prime Minister Narendra Modi’s personal attack on West Bengal chief minister Mamata Banerjee in his two rallies on Saturday. Blame it on your newspapers, folks. And pay attention: Modi is to raid West Bengal again in his third rally in Siliguri on February 8 and you similarly would’ve a blanket pulled over eyes by your newspapers.

It’s important to call out these English mainstream newspapers. Indian Express and The Hindu are alleged to be the Left’s front soldiers (an irony for Mamata’s TMC it is which has uprooted decades of Left’s entrenched rule in West Bengal and logically the newspapers should’ve lapped up the charges against “Didi” –but no Modi and BJP are a bigger existential threat to Commies’ ideology); Hindustan Times is said to bat for Congress; Times of India is relatively neutral but that’s not to mean it’s objective: in an advertisement-ridden newspaper, important aspects of  a story are hacked without a thought.

I am not going to point out mischiefs of each newspapers though there is a great provocation on the part of Indian Express. Look at its headline: “After budget, Modi hardsells sops for farmers, middle class”.  Does it convey you Modi’s brutal attack on Mamata? If you are an Indian Express reader, take time out to read their coverage in full and you would be aghast. This editor is no journo but an artist. If you agree then spread the word to put lakhs of its innocent readers on guard (The newspaper is India’s sixth largest and are even more impressive on internet: India ranking 80; Global 982 as per Alexa).

So below are the specific punches which Modi threw at Mamata in his two rallies on Saturday (watch the two speeches in Thakurnagar and Durgapur; Modi is at his best) and compare it with the information your English newspapers have provided:

Two attending news need to be brought to your notice, readers. One, Home Minister Rajnath Singh has accused Mamata’s government of not providing land to seal the India-Bangladesh border which is causing massive infiltration, including one of Jihadis, from the across the border. “Illegal citizens from Bangladesh are entering West Bengal,” said Rajnath Singh. (This while Mamata fights tooth and nail the Citizenship Bill, intended for induction of displaced Indian refugees from our neighbouring countries.)

Two, CBI is in hot trail of Kolkata Police Commissioner Rajeev Kumar who it claims is missing and faces “imminent arrest”. Rajeev Kumar allegedly is delaying and diluting the SIT probe in the multi-crore Saradha and Rose Valley ponzi scams. As per CBI sources, they had summoned the officer twice for interrogation but he (Rajeev Kumar) had not been cooperating. Over to Times of India:

“CBI sources said when Kumar was leading the state Special Investigating Team (SIT), crucial evidence had either been lost or tampered with to save some influential persons in the state.

“After CBI summoned him, Rajeev Kuma had even written to then CBI director Alok Kumar Verma. The Saradha and Rose Valley chit fund probes were being headed by then special director Rakesh Asthana at that time, which apparently had become another bone of contention between Verma and Asthana…”

Well, well, well, I hope you get the drift readers. West Bengal is on fire. It’s at a critical trajectory where BJP is trying to fight back the Islamist, Jihadi forces and their takeover of Mamata’s land. BJP plans to turn the heat further in coming days. Amit Shah has begun his poll campaign; and so has Rajnath Singh, not to forget Uttar Pradesh chief minister Yogi Adityanath is coming over. Modi would be the mascot of these “Ganatantra Bachao (Save Democracy)” rallies across the state.

Meanwhile, I presume you are aware of the development that TMC Lok Sabha MP, Saumitra Khan had joined the BJP last month and likened Mamata Banerjee to Germany’s Adolf Hitler. If not, you could blame this too on your newspapers.